On my recent New York trip, I discovered a restaurant that I would eat at daily if I lived in Manhattan. Or if it opened a branch here, but then it would probably lose its Chelsea pub ambience. 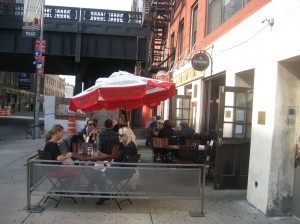 Everything at Half King is downright delicious! And not even close to expensive. And the casual vibe makes it easy to drop in at any time; there’s a bar, a sidewalk patio, and three other dining areas, each with its own personality. And with the most heavenly scones and cream ever, and a couple of low, flat eight-seater booths, I’m just hoping they add Afternoon Tea to their many and varied menus.

Lauren and I went for lunch, which they label “Late Risers.” This is one of the first times that I actually was attracted to just about everything on a menu! Since it was our first time there, we did order more dishes than we could possibly eat right then, but we brought the left-overs home to her husband and son and my mother to try, so I’d have extra opinions for you. They were as positive as ours, especially that of my little mother, the scone expert. She said the blueberry ones we had were “heavenly!,” and I absolutely agree. We thought so even without their special cream, which enhanced the flavor. 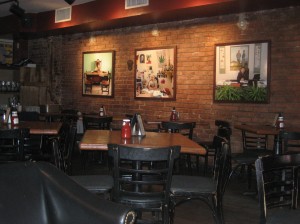 But I’m getting ahead of myself here. The service combo of manager Albert and server Ariana was more than accommodating. To everyone, because I watch for that treatment for the assemblage. It looked like a roomful of happy, satisfied customers. 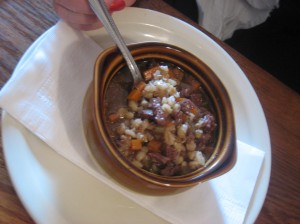 Two of the lunch menu features that can’t be beat are the Burger Box, and the incredible $12. specials. I couldn’t get over the latter! You choose either a lovely house salad or a hearty soup. The one we got was beef barely and it was OMG! Chock full of healthful ingredients, and absolutely fabulous. I didn’t want to save room for anything else! You also get a soda with it, and we hit the jackpot the day we were there with the wonderful entrees, dreamed-up by Chef Gregory Baumel and the, as the menu states, “Thrill Grill Kitchen Crew.” (I think I’d like to party with these guys!)

Lauren really enjoyed the “hearty lunch” baked penne with four cheese and crispy chicken, (which is also Albert’s favorite,) while I just could not bring myself to share more than a tiny bite of the holiday-esque turkey with corn bread chorizo stuffing. I’m still licking my lips over that one. 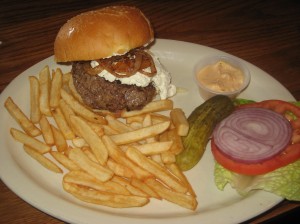 We tried two of the eight burgers, and although venison or buffalo ones may tempt others, we stuck to the beef varieties. (There’s also turkey, salmon, and veggie ones.) I got the Kobe burger with simply cheddar, although there are over a dozen topping choices, and it was sublime. I couldn’t put it down. Lauren chose the most popular sirloin one, and topped it with goat cheese and “perfectly cooked” fried onions, and was impressed that it was “really substantial and tasty.”

The burgers come with regular fries, and we also sampled the “perfectly seasoned” hellfires, that had the “right amount of bite.” But the winner was the sweet potato fries that Lauren deemed the “best” she’s “ever had,” and trust me, she’s the expert here–she gets them everywhere.

It sounds like we had already eaten too much, but we really just take bites so we can pass the knowledge on to you. But even we were in shock when we got a load of the size of the mac & cheese portion–it was enough for ten people! Easily. The portions were all overly generous, but this one was ridiculous. It was delicious, too. 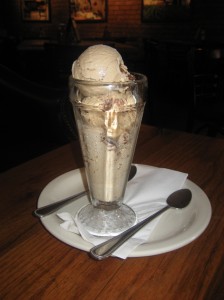 To me, the desserts were the pieces de resistance. The special that day was bread pudding with my favorite combination of ingredients–chocolate and banana, with warm vanilla sauce. But, shockingly, even better to me was the hazelnut biscotti gelato. It comes in a big fountain vessel with long spoons, and again, was gigantic. Most eateries dole-out one tiny scoop and pat themselves on the back. Half King gave us at least three times that size for not much more than a cone on the street, and it was the perfect ending to an incredible meal.

But wait–I must tell you about the scones in detail. They’re listed with the breakfast items on the menu, but they’re really a meal unto themselves. We chose to have them for dessert. Ariana told me that sometimes they have honey walnut ones, but this was blueberry day. Since I really love only chocolate chip scones, (Gregory–you can steal that idea from me, if you like,) I wasn’t expecting much. 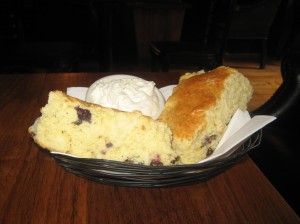 But I can’t even properly portray how excellent these were. The serving is two giant triangle-shaped scones that look like almost-full cakes. The flavor is so much better than usual scones, warm and moist. And they make their own cream to put on them. It’s not quite clotted cream, which is my favorite, but whatever it is, there’s no need for the usual jam or preserves that go along with other scones. Lauren and I had a couple of bites right then and there, but I brought them home and it took my mother and me at least four more tries to finish them both. Unbelievable.

If I lived in Chelsea, I would just eat here every day. (Or take-out from there daily, if I still lived with my mysterious Mr. X, which, of course, I would!) You could go a whole month without ordering the same thing, but this is one place I’d be happy to repeat meals at–I could easily eat multiples of every single dish I tried that day. And every afternoon, you would find me in one of their booths, enjoying scones and tea, only this place is so down-to-earth, I wouldn’t even need to put my pinkie in the air.