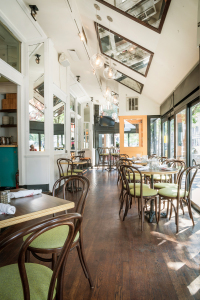 The porch area. Photo courtesy of AG Kitchen, as is the big one at the top.

This is such a fun eatery, especially with a group. (And not just because of the happening atmosphere, but also to eat more of the delicious Mexican-American food!) I went late one night recently, after a screening, with two of my best eaters, Sharon and Sheila, and we had a blast. We actually had such a good time that we wound-up closing down the place for the night! (We were there so long that the uber-pleasant Kevin had to take over for our original waiter, Chris, and I’m happy to say that we lucked-out with both of them.)

We considered sitting on the covered patio, where Gerardo makes their famous guacamole table-side, but we opted instead for a booth in the back, so that we could also keep an eye on the baseball play-off game that was on the TVs in the bar. We took all of the menu suggestions of Joshua, the cute manager, and came up with a winner meal. 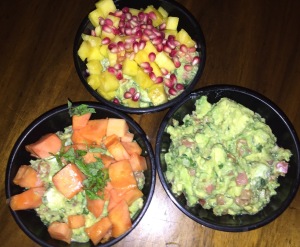 We started off with the Guacamole Trio. And if we had not eaten even one more bite of anything else that night, we still would have been thrilled with our meal! The three flavors are the classic, a papaya and mint, and a pineapple and pomegranate that I could eat every night of my life. We appreciated that the menu gave us the choice of mild, medium, or spicy. And that they didn’t make fun of me for choosing mild. And that it comes with really crispy corn chips. Sheila said all of the guacamoles were “very refreshing,” and Sharon pointed-out that each flavor was a “generous portion.” Even though I don’t drink, I knew right away that the guac and a margarita at AG kitchen would always make for a great night. We all agreed that we would come back just for this one – no matter how the rest of the food was. 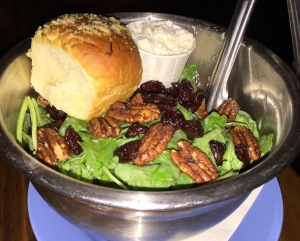 Baby Arugula Salad. (That’s the cheese on the side, as I asked for.) Photo by Karen Salkin.

But, happily for everyone concerned, the rest of the fare was fabulous, as well. We moved on to the Baby Arugula Salad, which comes with super-tasty candied pecans and a mint vinaigrette dressing, along with a surprise of dried cherries. Sharon said that the mint and arugula were a wonderful combination, and I went nuts for the nuts!

At Joshua’s suggestion, the girls tried the bacon-wrapped dates appetizer, that comes with endive and blue cheese. Sharon commented that she loved “the juxtaposition of the crispy bacon on the outside and the creamy warm baked dates on the inside.” And Sheila said it was a “sweet and salty delight.” 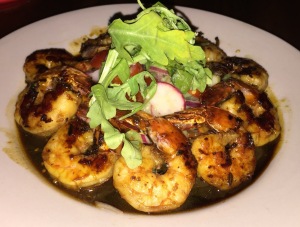 For my entree, I went with one of their signature dishes, the Brazilian-style Samba Chicken, which is marinated for twenty-four hours. It comes with two sauces—a honey glaze and a spicy mojo–contained in special little spaces on the compartmented plate, and they were both equally delicious. But the chicken itself was so flavorful that I really didn’t even need sauce for it. It also comes with a choice of sides, which I’ll get to in a second.

The girls shared two “Dinner Favorites,” with great success. First up was the 1940 Rum-Glazed Jumbo Shrimp, which I couldn’t get a comment about from them because they were so busy enjoying it! At one point, I queried, “Do you guys like it?!” Sharon answered with a resounding, “We sure do!!!”

They also shared Chef Garcia’s Seafood Paella, which Sheila said had “the most beautiful presentation,” an assessment I wholeheartedly agreed with, even though I didn’t try it myself. (I don’t eat seafood.) 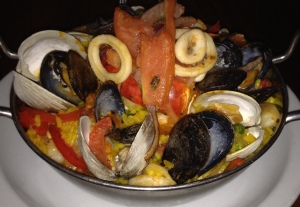 They admired that it was “chockfull” of crab claws, lobster, shrimp, clams, mussels, chicken, and chorizo, and came with a “flavorful, creamy sauce” over the saffron rice. Sheila, the New Englander of our trio, was very impressed with the “ample seafood.” You can order it as a single, or for two people. They ordered it “para uno” (which I hope you all know means “for one,”) but I swear, it was enough for four people!

AG Kitchen’s side dishes are in the categories of “Veggies” and “Starches,” which is clever. I got to choose one with my chicken, but we also ordered two more, so we could share all three. Since I am on a limited diet these days, I was thrilled that they had not only sautéed green beans, but also grilled asparagus. Both of them came topped with tomatoes and garlic, and are perfect healthful choices. The girls went nuts, I mean absolutely bonkers, over the Hollywood Fries, which are crispy, crunchy French fries topped with parmesan, parsley, and sea salt. I’ve actually never seen an order of French fries go as fast as these did! 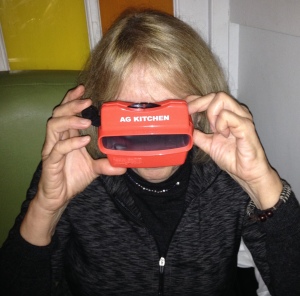 A customer viewing the dessert “menu.” Photo by Sharon Lieberman.

We were fully stuffed and happy by then, but when Kevin showed us the adorable dessert “menu,” we loved it so much, we just had to try a couple. This is why “menu” is in quotes—the presentation of it is…individual View-Masters! We each got a viewer, and perused the dessert choices at our own pace. We had so much fun going back and forth with the pictures and descriptions; all three of us were practically squealing like children on Christmas!

We ordered the desserts really just because of the fun we were having discovering them that way, but we were all very pleasantly surprised by just how delicious they were! We chose two to share, and they are both unique, inventive, and positively yummy!!! 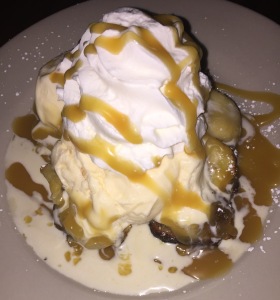 The Banana Mania is bananas (duh!) with vanilla ice cream, caramel sauce, and whipped cream, but is so much more delicious than it even sounds. The Chocolate Empanadas are a half dozen warm bite-sized empanadas filled with chocolate, and topped with whipped cream. I could eat those every night!

Seriously, if I lived in the neighborhood, I would go to AG Kitchen several times a week, just for this dessert, preceded by the guacamole. That is a must-have duo. (Thank goodness for my waistline that I live across the country from it!)

I’m also a fan of the Columbus Avenue location of AG Kitchen, which is so easily accessible by every method in New York City. The parking is soooo easy there, especially at night. Between that ease; the lovely, knowledgable, and enthusiastic staff; the atmosphere of fun; and especially the food, this place is a win-win-win!