As I was recently leaving one of the fabulous New York City events to which I was privileged to be invited, and walking down Madison Avenue, I looked up and noticed the Angelo David Salon! That has always been the only place in Manhattan where I’ve had my hair done, but, since I had been out of town for so long, I didn’t realize that they had moved from their previous Grand Central Station neighborhood! I’m thrilled that they did because I found that area so hard to get to, but this place is the opposite. 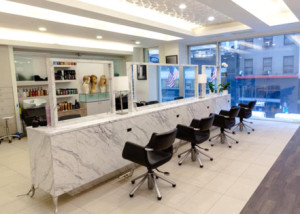 The interior of the Angelo David Salon.

Even though I was totally time-constrained in New York, I knew right away that I had to make time to pay a visit to this new salon of Angelo’s; besides wanting to check the place out, in general, I also wanted to have my hair and nails refreshed before I went back to Los Angeles. And I’m so glad that I did!

Not only is this a very convenient location, no matter where you’re headquartered in the city, but the interior of the salon is even better than before, too. The view of Madison Avenue is great! I felt like I was having my hair done in a movie! 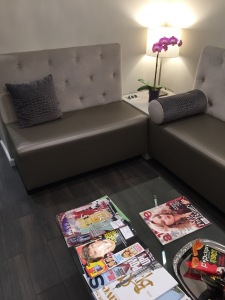 I was happy to see that the Angelo David Salon is still staffed by such professional yet personable personnel. Some were new to me, and some old pals. They all contributed to the all-around pleasant experience.

As I exited the elevator on their second floor space, the first thing I noticed is the pretty product display. There was a great assortment, of only the best. I was proud to see so many that I already use!

I ran into Angelo himself right away. That man never ages! He’s also the most honest person in the hair business that I’ve ever met! As soon as he greeted me, he told me that my hair “looks great!” How many other salon owners do that?! They usually try to knock you down, so that you feel like you need them. Angelo’s secure enough to know that his clients all choose them! 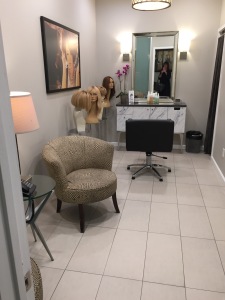 One of the private rooms. Photo by Karen Salkin.

He’s also someone who is known to help so many clients counter their hair loss, (which there are several private rooms for.) But, when I showed him how my new stroke meds are negatively affecting my follicles, (in my opinion,) he told me to stop worrying, and declared, “You have an amazing head of hair!” I was floored—I have never encountered such good honesty in the entire beauty business before! I can’t tell you how much I appreciate that attitude.

After assistant Nyla Aldridge set me up, (including with a beverage and snacks, which you know I loved,) I met my stylist, Dion Moore, who had the same kind honesty as Angelo. Dion had recently done the hair of a close friend of mine, and she had sung his praises to me, so I knew I was in great hands. He not only came up with the perfect color in a nano-second, but he also did a gloss and a protein treatment, for a little extra gorgeousness. I have good tresses to begin with, (knock on wood—and everything else I can find,) but I swear—my locks never felt so good! I could not keep my hands out of my own hair!!! 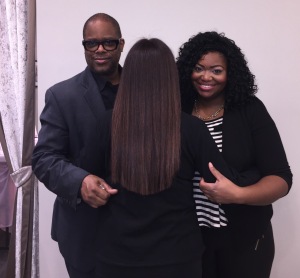 The finished product! Karen Salkin, (with her back to us, to show off her new fabulous blunt cut,) flanked by stylist Dion Moore and assistant Nyla Aldridge. Photo by Helen Rothwax.

Then Dion cut about four inches off my waist-length hair! But, somehow, he made it still look pretty long. And healthy! He did a very hip blunt cut. It’s been five weeks now, and I’m still getting compliments on it! I can’t believe he cut it so that it still holds that shape for so long. I have no idea how he did it, but that man is a whiz! (By the way, my color is hanging in there, as well.)

I was in a major time crunch from luxuriating for so long, so Dion and Nyla each grabbed a blow-dryer, and double-teamed my wet mane, to get it all dry and styled in the shortest time possible, which I sooo appreciated! And, of course, I walked out of there looking fabulous. 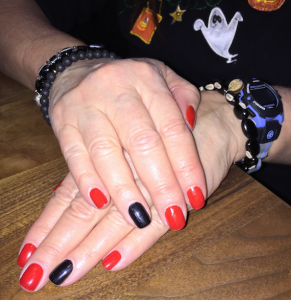 The classier version of Halloween nails that Marjanna did on Karen Salkin. Photo by Helen Rothwax.

One of the biggest perks of this salon is the manicures.  Besides that lovely long-time nail tech Marjanna Kryekurti does a gorgeous job, and is uber-pleasant while doing so, she can do nails on the fly.  As I said above, I was in a time crunch that day, so she started my mani at her station, continued it while make-up artist Alma Sadeghi shaped my brows, and finished the shiny nails while my head was in the sink being shampooed! What luxury! Even though she usually does classy nails, she didn’t mind painting mine orange and black for Halloween. But she gently suggested that we change my design from all black, with one orange accent nail, to the other way around, which was so much less cartoonish. I was happy with that better color scheme because I had to fly home the day after Halloween, so there was no need to look like a clown for that!

My entire time at the Angelo David Salon was wonderful. I loved everything about it! I just don’t know which was better—the pampering I received there or the compliments I’m still getting on my new look! So, I’ll just have to call it a tie, and look forward to my next visit there to break it.