With snow once again blanketing the east coast, (but with me warm and dry back in Los Angeles,) I figure this is a good time to tell you about all the elements I encountered in the last month in New York. (BTW–I’m not complaining–I love snow!)

Mr. X and I spent most of December and the beginning of January with my little mother in Brooklyn. [Note: Being that this was our first Christmas without Clarence, it would have just been way too painful to spend it in the usual way at home in L.A.] And this time, when I say “in Brooklyn,” I totally mean it–we went to Manhattan on just New Year’s Day! We were even snowed-in the house for a week. Most of what you heard reported around the country about the city’s super-slow snow removal is absolutely true. On our block there, they didn’t come until the middle of the night on Thursday, over four days after the storm! Totally unacceptable.

We were glued to the news the entire week. When I wasn’t out shoveling snow, that is. (Yes, you read that right–I did, indeed, do hard labor. Which means I’ll have a big update on my herniated disk situation in an upcoming column.) I was so grateful to be moving, after this past year of inactivity, that I was actually happy to be out there working with the males in the ’hood. Of course, Mr. X did the hard stuff, like dig us out of the house to begin with, but I really did do more than my share. 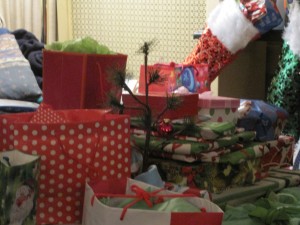 Notice our official Charlie Brown tree in the center of the gifts.

But wait– I’m getting ahead of myself. First, I’m happy to report that my little mo’s first Christmas (she never celebrated one before) was very successful, although, like a little kid, she asked to open the presents ever day for the whole week that they were wrapped. And, as an avid doll and stuffed animal collector, especially ones who sing and move, she wanted them all to be dolls! That was part of my plan to begin with, but when we found an attached Raggedy Ann and Andy, who sing I Got You Babe, we knew that others would pale in comparison, so we didn’t get her the rest. (She’s insanely in love with the adorable dog who flattens out to become a pillow, though. I must admit that I snuck a hug or two from him myself.)

On each of my usual month-long trips to New York, I spend at least four days in Manhattan, and time away, too. (I.e. either a week-end in the Hamptons or a whole week in Rhode Island.) This time, though, out of the twenty-three we were there, I spent four days at the mall and seven days in the house! And I had pizza five times during my stay and Nathan’s hot dogs four. Healthy trip, eh? But it really was cozy, fun, and delicious.

So, on the night of December 20, (well, really the early morning of December 21,) there was an unusual lunar eclipse. For the first time since 1658, (the date I heard reported, though a few different years were bandied about later,) this was happening at the same time as the winter solstice. Mr. X, who was bothered by the way-below-freezing temperatures, went to bed at 1AM and suggested I do the same, since the wind chill factor was in the low single digits. I got into bed at 1:05, but just knew I’d be tossing and turning, wishing I were witnessing this historic event, that could be viewed on my own back porch! 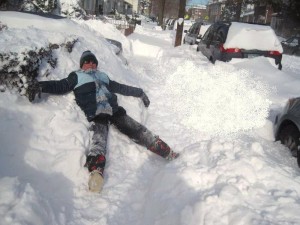 Me, lying in the snow. I told you I looked like Ralphie's brother!

So, I got up, but on my thermals, another five or six layers of clothing, fuzzy boots, and my winter jacket, (I looked like Ralphie’s little brother in A Christmas Story,) and unlocked the back door for probably the first time in three years.

While it was beautiful out, to me, I jumped about ten feet in the air every time the wind made something creak. (In addition to the news of the impending eclipse, all night there were warnings that the “Flatbush rapist” was loose in the general neighborhood. That terrified me, though I should have realized that my thousand layers may have been a natural deterrent if he were hiding in my backyard.) 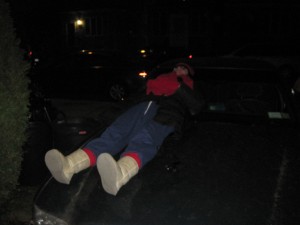 Me lying on the hood of the car, viewing the eclipse. A photo I'm not proud of, btw, but it portrays what's going on so perfectly that it had to be shown.

I kept calling Mr. X (on our cells, though his window was just a few feet above where I was perched for the viewing,) and when he reminded me that I had binoculars in my suitcase, I finally convinced him to come down and join me. We had such a fun time!!! We watched from all different vantage points, (with him at my side, I was brave enough to venture off the porch,) our favorite being lying on the hood of our car, leaning back on the front window. It was truly heaven.

Being that the whole event took two painfully slow hours, we kept running into the house to sip hot tea. We’d look out the window to see how the eclipse was coming, then run back outside when we detected movement, only to stand around for another ten minutes. It was a riot. We felt like we were back on a movie set, doing the “hurry-up-and-wait” bit that’s de rigueur in our business. At least this wasn’t a production of Waiting For Godot, though at times it felt like it, but the full eclipse did finally come at about 3:30AM.

Truthfully, it wasn’t as spectacular as had been prognosticated, but I’m so grateful to have witnessed it. I’m glad we didn’t stick around to watch the other side of the moon appear for the next two hours, though. I knew I could figure that one out in my head. And I needed to get some sleep for some more junk-food-devouring and mall-visiting the next day.

So just five days later, we woke up to the Great Blizzard of 2010! Using my eclipse garb, (only this time with my knee-high, weather-proof Sorel boots,) I walked around the block in it to get the Sunday paper before it turned ugly. I must confess that the wind whipping the snow in my face was not as much fun as I had imagined in my romantic mind. But I was in love with the beautiful winter wonderland it left the next day.

Until it turned into a gray nightmare over the next few days. When I finally heard the snowplows arrive after midnight five nights later, I, at first, watched from the upstairs front window, but then, grabbed my trusty fat outerwear and ran downstairs to protect my driveway from them. I flagged-down one of the drivers of these one-man caged operations, and said, “I see you’re piling-up the snow in some driveways,” to which he replied with a bald-faced lie, “We’re trying not to.” But they were filling-up the one across the street to the sky! I asked them to please not do it to mine, and went back to bed. But I ran back down a half hour later to make sure. I think I spent more time out in the elements in the middle of the night than I did in all the days combined!

The highlight of my trip came on New Year’s Day, our one day in Manhattan, when I witnessed my favorite dancer, Los Angeles’ own krumper, Oldz Kool, (who’s the one in t Featured Video on this site,) performing on the plaza between the Plaza Hotel and the Apple store, with New York dance group Breeze. The stunned crowd went wild to see a mature white guy krump dance with such expertise and panache. We all loved him! His performance was more exciting than all the store windows and Rockefeller Christmas tree and skating combined! It was the perfect way to start off 2011!