I’ve been working on an essay on this very topic for awhile now, just because I think it’s a worthwhile one, but when I found-out that today is National Say Something Nice Day, I knew it was the perfect time to share my thoughts on the subject. Even if you don’t read this article any further, please just do what the day says to do, (i.e. say something nice,) at least for this one day. 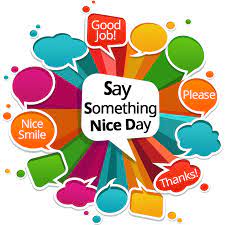 So here’s the basic deal: People always want to hear something nice, even celebrities. It puts some pep in someone’s step to know that someone else appreciates something about them, (outside of creepy things, like “nice rack,” of course.)

I’ve been giving out verbal “flowers” ever since I became brave enough to say a few words to strangers. (For those of you who know me, and think of me as a “chatterbox,” as Mr. X has been labeling me recently, the truth is that I really do not love talking to strangers.) I realized that telling my own friend that a stranger’s hair is gorgeous helps no one. So I began telling the actual person whose attribute I’m actually complimenting. Most are surprised to hear it, but they’re always appreciative. And I recently realized that I get an extra little boost from knowing I made someone happy, if not their entire day, (as I often hear.) 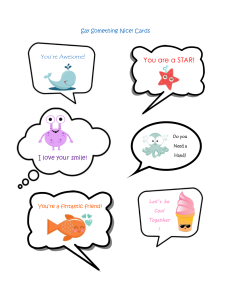 For years, my friends in New York made fun of me for complimenting people on subways. If I loved a girl’s manicure, I told her. If someone’s kid was cute or well-behaved, I lauded the parent for it. If a couple looked cute together—you guessed it–I let the lovebirds know. (Just last week, I told a cop that he and his wife looked like they were flirting and would hook-up! And he told me, with a big laugh, that I was definitely correct, about all of it!)

I’ve been known to even get out of cars to say something nice to someone. Pre-pandemic, I saw a mother rocking a fabulous coat while walking down the street, pushing her child’s stroller. Over Mr. X’s objections, I jumped out of the car to let her know how great she looked. Since this was in Beverly Hills, I figured she wouldn’t care at all, but she actually stopped to thank me profusely. She said she was having a hard day, and I had just turned it around for her!  That’s the power of saying something nice to someone.

Of course, the title of the day doesn’t stipulate that what you say be true, but I think it should be. (After all, it’s not National Tell A Lie Day!!!) However, it doesn’t have to be about something that’s happening at that very moment.  The statement can be as simple as something about a condition that always exists for them. For example, “You’re always so smart, or “You always make me laugh,” or “I love how you talk to your children.” There are literally millions of ways to say something nice (and honest,) to someone. 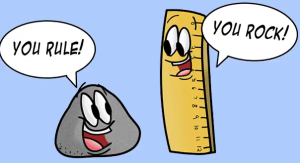 I know firsthand how happy a random compliment can be.  Even something little. As I wrote in a recent column, I was once walking into a restaurant in New York with really funny slipper shoes (out of necessity,) and it still brings a smile to my face that a young guy who was exiting the place told me, “Cool shoes!” It was such a simple comment, but it’s still fresh in my mind almost five years later!

Here’s one more little personal anecdote: When I was doing my show, Karen’s Restaurant Revue, I was lucky enough to go backstage at several theaters around town. There were always celebrities in those rooms. One time, I overheard a big celeb saying wonderful things about my show to her friend, and I kept wishing she would just give those props directly to me. I still heard them, by accident, but it would have meant so much more if I had received the kudos myself. And then I could have thanked her for the kind words! 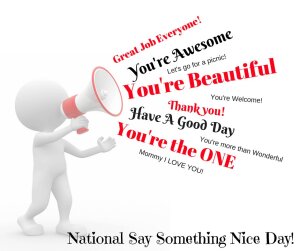 So, to honor today, who don’t we all just give-out as many compliments as possible? I’ll start the ball rolling, with what I have to say to all of you guys: You’re the smartest, most loyal people I know! I mean it—I always appreciate your readership.

Now please pay it forward, at least for today. Let’s all make it the most Happy National Say Something Nice Day!