I have to be honest (and please don’t hate me for the admission)—I was never an I Love Lucy fan growing up. I get too nervous watching characters get into scrapes, and Lucy herself was too loud for me when I was younger. I didn’t understand her appeal until much, much later in life. 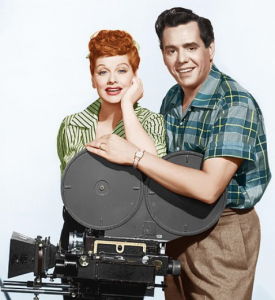 Actually, even though I’ve been compared to the crazy redhead since high school, (and even moreso from the start of my former TV show right up until today,) I didn’t fully appreciate Lucy until I played her on a TV sitcom! Sort-of.

So, in honor of National I Love Lucy Day, here’s that story:

I had already done one episode of Fox’s Open House, (as the wife of series semi-regular, Ray Buktenica.) The producers were considering having my character recur, but the one I was on was filmed as what was supposed to be the end of one season of the show from which this sitcom was spun-off, and then it became Episode 1 of the new one, (don’t ask,) so they sort-of changed a lot of the plot-lines from the original series. They asked Ray to stay, but didn’t need a fam for his character anymore.

But, happily for me, the powers-that-be over there were pleased with my work, so they asked me to do a second episode as a different character, (which was kosher in the TV biz because it was supposed to be another season; SAG doesn’t allow performers to play multiple characters in one season.) But I was already committed to doing a guest spot on a different series that week, so I had to decline Open House’s offer. (Ah—those were the days, when I was actually an in-demand entertainer occasionally.) So that freed me up to do one more episode of the show later on in the run. 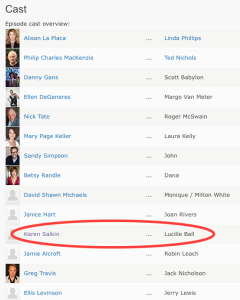 The Open House cast list on IMDB. Who would have ever thought that my name would be listed as playing “Lucille Ball!”

And then I got the call, literally begging me to appear on the very last episode of that season, (which turned-out to be the last one of the entire series,) as…a Lucy impersonator!!! I asked one of the producers why they thought I could play that, to which she answered that they knew I could! So, using their confidence in me as inspiration, I agreed, and off I went to do the table read which began the work week.

But as soon as we started reading the script out loud, I realized that all of the other guest stars that week were…actual celebrity impersonators! There was a Robin Leach, a Joan Rivers, a Jack Nicholson, a Jerry Lewis, and the wonderful late impressionist-extraordinaire, Danny Gans, playing my Desi. (He was a series regular, and the storyline was that his character was having a party with his fellow impressionists as guests.)

When I saw that the sitcom had hired real impressionists for the rest of the cast, I asked those others why the show hadn’t just hired a real Lucy one, as well. And, to a person, they all let out a little gasp, and declared, “No one would ever touch Lucy!!! Then the producers admitted that that’s why they needed an actress instead.  And they said that I was the first one they had all thought of! That was flattering, but put sooo much more pressure on me than on the other guest stars, who had been plying their comedy trade for years at that point. 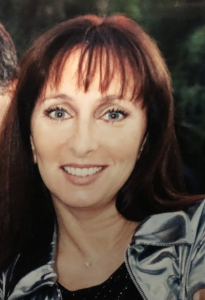 There don’t appear to be any pix from that Open House episode, but this is how red Karen Salkin’s hair was back then. Photo by Karen Coe.

Shockingly, the show went really well!  I had only one issue with the whole shoot. The hair people had wanted to dye my auburn hair “Lucy red,” which I was not happy about, but agreed to. Then they forgot to order the color in time! Oysh. I told them I had a good red mousse at home, from when I used to put it in my formerly-punky hair a year or so before. So I brought it in for the taping, and while I was sitting in the chair going over my script one final time, I didn’t realize that the hair woman had, instead of just taking a handful of the mousse and running it through my hair for a second, sprayed the contents of the entire can out into a bowl and was brushing it on, thick, like hair color that you wash out! By the time she was done, my tresses weighed about a thousand pounds and looked dirty and grimy!!! I was mortified. But there was no time before the taping in front of a live audience to wash it out and do it over correctly. That would have taken at least another hour, (especially because they had already done my make-up,) which we did not have.

So, on the show, my hair looked dreadful, the uber-conservative outfit they made me wear was hideous, and, for the first, and only time, in my entire acting career, my nose looked ten times bigger than it even is! 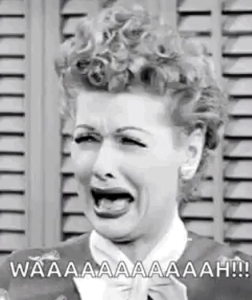 But at least I got to do Lucy’s uber-famous wide-mouthed cry, “Waaaaaaah!” So, it was all a success. And I always have the pride of saying I played Lucy once in my acting career.

On a sidebar, ever since I’ve known Mr. X, as my auburn hair got even redder, he started calling me, “Luuu-cyyy,” in his best Desi Arnaz. And whenever I get into my very many zany scrapes, (which I’m sure will resume as soon as the pandemic is over,) my friends tell me that I’ve gotten them into another “Lucy and Ethel” situation, (even if they’re male!) So the legacy lives on.

And, to my fellow gingers, and just crazy girls, and Lucy fans everywhere, I wish you all a happy National I Love Lucy Day!

[Note: My condolences go out to the entire Arnaz family on the death of Desi Jr.’s young granddaughter last week, after her courageous cancer battle. It’s so heartbreaking.]