There’s not really anything profound to say about National Wear Your Pajamas To Work Day; it just struck me as amusing, so I decided to commemorate it. 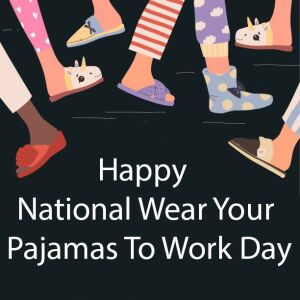 Amusing because that situation has been every day for the past year for just about everybody, (except for frontline workers, of course.) And actually, PJs have been my work attire for the past eleven years!!! Who gets dressed to write on their computer all day?

When I started writing for People.com several years ago, I actually thought that I would be going into their office every work day, and I had visions of all the fun outfits I would wow my colleagues with. But then I found-out I would be working from home, and those fashionable thoughts went out the window. I went directly from bed to my desk each day, and Mr. X would always laughingly chide me, “Going to work now?”

At the time, I was also the restaurant critic for two publications, and had columns at a couple of other websites. It was a crazy time. And conducted entirely in my PJs! That was such a difference from doing my former TV show, Karen’s Restaurant Revue. Not only did I plan a new fabulous outfit for each episode, but I was dressed fully and wonderfully every day and night to live the experiences I talked about on the show! Dressing great was my thing back then. And those times are worlds away from how I’ve been attired to work for the past thirteen months. (And counting.)

Even Jimmy Kimmel, my favorite current talk show host, has gotten in on the fun on occasion. (And by the way–I own tons of PJs that are similar to his.)

But two episodes of my show would have qualified to be celebrated for National Wear Your Pajamas To Work Day because I did them…in my PJs! That’s right; weird, but true. One was when I was home with the flu, and had tried to cancel my taping for that night. I had let the audience know not to come, but then the studio called and said they’d take away my time slot if I didn’t show up right away! Lovely, right? (That was in the primitive days of hyper-local TV.) So a friend picked me up, and I went straight into the studio with no make-up, rocking my PJs and robe, and I used my comforter as the tablecloth!!! Not my most shining moment.

But the one that has since become a classic is what everyone refers to as my “Sick In Bed” show. Again under threat of losing my coveted time slot, I had to come up with something, and this time I was waaaay too sick to leave the bed, let alone my apartment. Mr. X had recently filmed me interviewing a bunch of notable-at-the-time celebs (Mr. T, Shaft‘s Richard Roundtree, Flash Gordon himself Sam Jones, the Hudson Brothers, and some soap opera dudes,) at a celebrity charity softball game he was playing in, to show at some later unknown date. So, when my illness presented the opportunity, he filmed me in bed introducing the clips, and then put it all together into a complete show. When I got better and saw the tape, I was appalled. But my viewers loved it! Whenever I guested on a talk show after that, the producers always requested to use a clip of that one. I agreed only one time, (for The Phil Donahue Show,) as long as they also included a clip of my mother on my show, because the sick-in-bed one was really a one off and sooo not representative of what my show really was like. (Actually, neither was the one with my little mo, but I wanted to show her on national TV, and that was my way of doing that.) 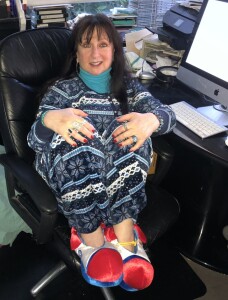 Karen Salkin hard at work in her latest PJs and clown slippers.(Yes, her desk was a mess that day!) Photo by Mr. X.

Getting back to National Wear Pajamas To Work Day, the great news for me is that I have loads of fun pajamas! Loads of them! The bad news is that only Mr. X gets to enjoy me wearing them. But there have been a couple of exceptions; over the years, I’ve hosted a couple of honest-to-goodness PJ parties, and my friend Heidi throws a pajamas-only brunch at the beginning of each year. I was thrilled when she even organized it as a Zoom fete this New Year’s Day, even though the assemblage was deprived of feasting their eyes on my very colorful footwear. (They were clown shoe slippers, from the actual circus!)

I actually wore another pair of crazy slippers to…review a restaurant in New York! Here’s the short version: On my first night in New York about four years ago, my friend Lauren and I attended a gorgeous charity event. I was wearing a pair of very fragile Italian flats that were not made for gallivanting around the city. I had already been standing long enough at the cocktail portion of that event, and couldn’t do it anymore. So I apologized to the PR rep, and said that I couldn’t stay for the dinner. Being the fabulous public relations person that she is, she quickly sent me to one of the casual eateries she represented instead. But I still couldn’t stay in those shoes for much longer. 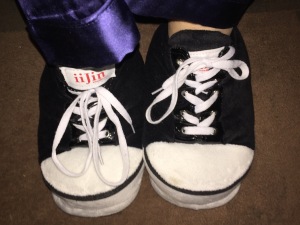 My adorable Little Lulu slippers from NY! (Worn with my blue silk pajamas, of course.) Photo by Karen Salkin.

So on the way to the very restaurant, Lauren and I went stopped at her nearby apartment to change out of our fancy attire. I fit into pants and a top of hers, but her normal feet are at least three sizes bigger than my very petite ones, so I really couldn’t borrow a pair of her shoes. And then she had a lightbulb moment–she said, “I have the perfect little sneaker thingies you’ll love!” And she brought out a pair of giant slippers that look like Little Lulu sneakers. They’re adorbs!!! But yes, they are slippers, not shoes. Those who know me well know that I really don’t care about technicalities like that. (I once wore three belts as my birthday party outfit!) And then, as we were walking into the restaurant, a delivery guy coming out the front door exclaimed, “Nice sneaks!” I can’t believe he even spied them down there! (But they are kind-of big.) I loved getting the props right away, and I have adored that footwear ever since.

If you have any stories of wearing your pajamas to work, please share them in the Comments below. I’d love to read them.

Otherwise, just enjoy doing so today. After all, what better time to do that than on National Wear Your Pajamas To Work Day? Have a fun one!

[Note: I will be wearing a more formal pair of PJs to watch the funeral of Prince Philip at the crack of dawn tomorrow. But with a fascinator and classy gloves this time.]