This pair of “National Days” are actually two separate entities, but for some unknown reason, they’re both celebrated on this same day this year. (But please notice that it’s not just “Pizza Day”; it’s “Pizza Party Day,” which is entirely different. The same with it not being “Chocolate Day” or “Chocolate Chip Cookies Day”; it’s “Chocolate Chip Day.”) 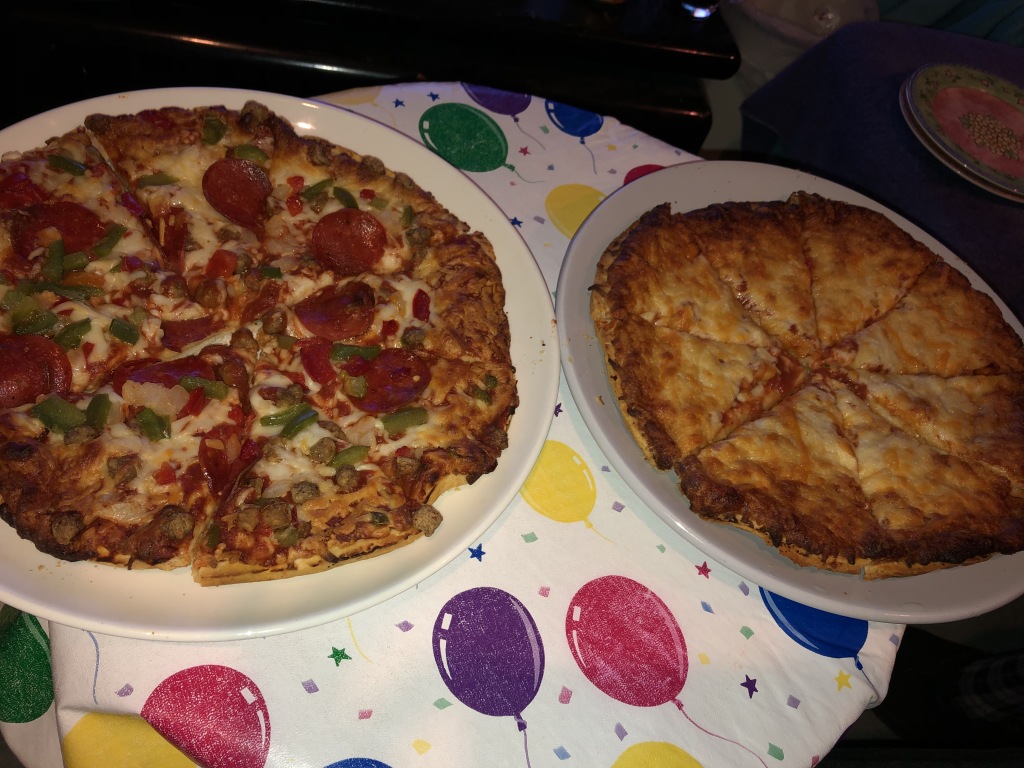 A duo of frozen pizzas, with party plates in the background. Photo by Karen Salkin.

And what a day it is for me! I basically eat just those two items every day! (Well, not exactly. But definitely often enough during this siege. And now I have an excuse to do it all again today!) 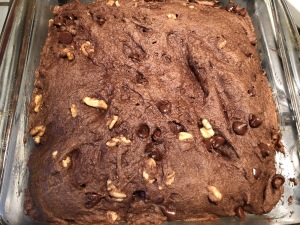 I don’t know which one I want to celebrate more! After all, there’s nothing more fun than a pizza party. But then again, I barely make any sweet treat these days without chocolate chips. Since Mr. X and I have been cocooning at home for over nine weeks now, I’ve just about used-up a gigantic bag of those delicious morsels. I’ve made banana-peanut-butter-chocolate-chip pancakes a bunch of times, a chocolate cake (with chips, of course,) peanut butter-chocolate chip cookies, and I even used them in my Tower of Matzahs!!! You’d think I’d be bored with them by now, but think again. I’m getting ready to make some chocolate chip bread pudding followed by chocolate chip scones! (The only scones, in my book.) I may even make a chocolate chip dessert pizza! OMG!

On the other hand, Mr. X and I had more than a half dozen pizza parties since we’ve been in isolation. None of them were really very satisfying, though. A handful were frozen pizzas, (which really came in handy, no matter how much like real pizza they do not taste,) and we had another quartet in one order the only time we deigned to get a delivery of any food. (The delivery woman arrived with no mask nor gloves, so that was the end of my trusting strangers during this siege.) And I made a couple of my own healthful ones, using cauliflower crusts. (I’ll tell you about all my isolation creations next week.) But I am sooooo craving a real, cheesy, oily New York pizza right about now. OMG—I can just taste it. 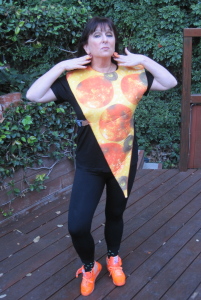 Karen Salkin rocking her perennial Pizza costume. Please note her pizza earrings–one is just a slice and the other is the whole pie with that slice missing! Clever. Photo by Mr. X.

On all my trips to Brooklyn to see my little mother after my father died, I took her to breakfast or lunch just about every day; she was just about as restaurant-obsessed as I am. (From whence did you think I learned to be so? As I told Johnny Carson on my first appearance on The Tonight Show, “My mother taught me how to not cook.”) But on one trip to visit her, all I had was six or seven days, (as opposed to the three or four weeks I usually spent there,) so my mother opted for us to stay in and just have different friends visit every day for…a pizza party! And we all loved those experiences.

So today, Mr. X and I will have yet another frozen pizza, followed by a chocolate chip anything, to celebrate. And to fulfill the “party” part of the day’s title, I’ll set-out fun plates and decorations (homemade now, of course—there will be no trips to a party store for a few more months,) and have soda, which I don’t normally drink anymore. And I’ll play That’s Amore while we dine. I may even don my pizza costume that I’ve worn on most Halloweens for the past decade! I suggest you guys follow my plan, (except for the costume part; I’m sure I’m the only one who has one,) today, as well. I promise—it will be tons of fun! (And after all, what else do you have to do?) [Note: There’s even a brand of frozen pizza that has a version that includes chocolate chip cookie dough right in the package! Now you have no excuse not to celebrate.]

So Happy National Pizza Party and Chocolate Chip Day, everybody! Make it a memorable one!