In all my years of intense clubbing, the Viper Room on the Sunset Strip is probably the only place I missed. I was a hip-hop club promoter, and even though many of my male counterparts did stop by the Viper Room from time to time, I think I was just frightened of it. It somehow seemed hardcore to me. 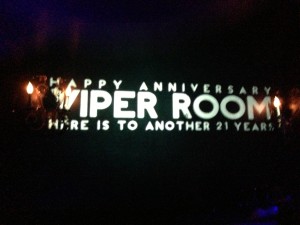 This was one of the many wall projections that entertained us throughout the night. Photo by Karen Salkin.

So, when I was invited to their twenty-one-year anniversary party earlier this week, I was really interested to finally enter the premises, and see firsthand just what is up there. (But I thought it was around way longer than that! I feel like it was here when I got to town as a teen-ager. I guess it just has that kind-of vibe.)

The main thing I want to tell you here is that old-school soul diva, Bettye LaVette, puts on one heck of a show!  If you ever get the chance to see her in person, no matter the venue, do it!  More on her in a minute, but first to the occasion which brought me the luck of being in her audience for the first time.

It turns-out, there was nothing to be scared about whatsoever in the Viper Room, except maybe the dark. It was so pitch-black in there, I couldn’t make-out any faces. And it was the first time I looked good in ages!!!

But the lack of lighting is great news, in general. That means that you don’t ever have to look good to go there! The lighting was sort-of like a crawl-space under a house in the south at three o’clock in the morning.  Not that I’ve ever been in any place like that, but I’ve seen scary movies. 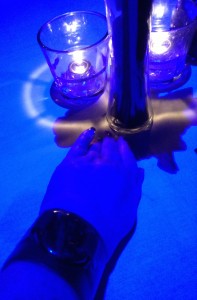 I had to take this picture of what I was wearing on my wrist that night. I know it’s dark, but can you make-out what it is? It’s a rock…band. Get it? It’s a rock on a band. And Viper Room features musical rock bands! How clever am I, for the not one person who could see it in the dark? Photo by Karen Salkin.

The invitation, (that stated “Party 8-9,”) led me to erroneously believe that there was going to be a party before the show, (especially because their website said, “The theme of the evening will be fancy 1960s attire. Think Mad Men with a whole lot of soul,” which only the people in my booth, and the one behind me, adhered to.) But there wasn’t any party, so I started off the evening a tad disappointed. “Party” to me means food and drink, (unless you’re one of my cheap-a** acquaintances, whose events I rarely go to,) so I hadn’t eaten, and I tend to get cranky when I get hungry. But no one else seemed to mind.

The good part of that mistake was that it made my pal, Diane, and me get there early enough to get one of the five booths to watch the show from, which made the whole event more comfortable. (Don’t worry–you know me; I found a young couple in need of seats, and totally shared with them.) But the crowd, who was not predominately young that night, seemed content to just stand around and drink and groove to the music. And isn’t that what a club should be about to begin with? [Note: It turns-out that the Viper Room does not serve food, which left me wondering how imbibers can drink without eating. That’s so weird, but I guess it’s done in all bars. Strong-constitutioned crowd.]

Now to the incredible show. I had never realized that the Viper Room is a live music venue! I swear, I thought it was just some kind of hardcore bar. What a great discovery to be made on its twenty-first birthday! I feel like I’ve missed an entire childhood!

And what a way to celebrate! Shockingly, I was unfamiliar with Bettye LaVette, but now I’m a total fan. What a woman!

Her voice is magical, her stage-presence is commanding, and her understated humor adds so much to the presentation. But, even if Miss LaVette had just stood there, with no band and no witty banter with the audience, she would have been a joy to behold. I seriously don’t think I’ve ever heard a female sing like that in person before. She doesn’t sing—she sangs! Where has she been hiding all my life?! I called Mr. X from the venue to listen to part of one of her numbers, and even he was floored. Diane said it was the best show she’s been to in ages. She can’t stop thanking me for inviting her!

Truth is, I was feeling really crummy that night, and should have stayed home, but I really hate canceling, so I went. And I felt worse, sitting there in the dark, my stomach growling, straining to chat with Diane over the very loud club music playing for the hour and half until the show began. But, for the hour and a half that Bettye was on stage, I felt nothing but joy and peace. All was right with the world for those ninety minutes, a time I really needed and appreciated. More than that a performer cannot do for her audience.

I have to share two bits of her show with you. One of her early lines, that she delivered perfectly, was, “When I come back to Hollywood and New York, [big pause as she looked the audience in the eye,] I come strictly to show off.” And that she did, in spades!

My favorite song was one where the refrain went, “You took my joy, I want it back.” I think that will be my new theme song to my siblings! How did someone other than I write it?! (It was actually penned by someone named Lucinda Williams.)

Bettye closed the show with the best exit since James Brown! It was great, and the eclectic crowd went wild.

Shout-out to her quartet of excellent musicians, as well; I’m glad they each got to leave the stage separately, to their own ovations.

There really is nothing in life that compares to great live music. Period.

So, Viper Room, I congratulate you on your anniversary, and thank you profusely for this opportunity to become familiar with Bettye LaVette. Who needs party food for the stomach when this woman fed our souls so perfectly?!

For the rest of the week’s celebration shows, check here: www.viperroom.com