I began 2017 with a bang, by seeing the lovely, classical concert, Salute to Vienna, at Walt Disney Concert Hall. What a different New Year’s Day experience that was for me! I’m usually either at a fabulous house party, or out shopping with the girls, or at home watching football with Mr. X. So, this was a delightful departure for me. 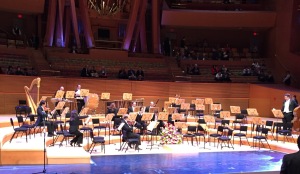 Pre-concert, when the musicians were just trickling on stage. Photo by Karen Salkin, as is the big panoramic one at the top of this page.

At first, I thought that perhaps I was finally growing-up a bit! But then I realized that I needn’t have worried—this wasn’t something new for me; I went to many concerts in Lincoln Center when I was a teen-ager in New York. But my reasons for attending those were very different than now: a) I didn’t want to be left-out of a mother-daughter day, b) I adored our pre-concert lunches at O’Neal’s Baloon, (that spelling is correct—I’ll tell you the story at the end of this review,) and most importantly, c) I got to spend my time there dancing in the lobby, with the beautiful mirrors and lighting to help me admire my teen-age self!!! (Hey—I never claimed to not be shallow!!! And I did use the classical music to practice my ballet moves, so I was doing more than just admiring myself physically!) 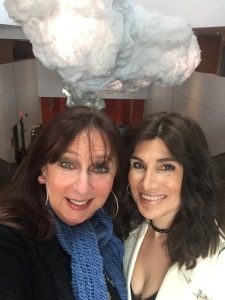 Karen Salkin and Alice Farinas in front of the weird cloud-like structure in the lobby of Walt Disney Concert Hall. Wonder what Karen is thinking! Photo by Karen Salkin.

But I was one of the last people to this particular modern-day party because Salute To Vienna has been going on for more than two decades! Varied musical companies perform the program in twenty-four different cities in the US and Canada over the few days surrounding New Year’s. (I love the line in their promo, “…concert-goers will party like it’s 1899!” Good one!) I believe all the musical selections are the same from company to company, but each group features different musicians, singers, and dancers.

The Walt Disney Concert Hall audience, (of which I was a part,) was lucky enough to get Peter Guth, the most adorable, charming conductor ever, along with soprano Lara Ciekiewicz and tenor Brian Cheney. (Only the first of that trio is actual Viennese, though.) There is nothing like live music!

This brand new program for 2017 really had everything—music, singing, dancing, light comedy, and even audience participation! It featured waltzes and operettas by Austrian composers, including pieces from Die Fledermaus and The Merry Widow, performed by a full orchestra, the Strauss Symphony of America. Some of the numbers were augmented by ballet and ballroom dancers. The whole presentation made me feel like I was in the classiest movie! (And they, of course, wrapped it all up with The Blue Danube waltz!) 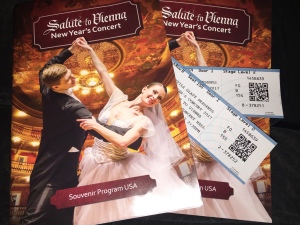 My friend and I loved everything about Salute To Vienna! It was all absolutely gorgeous, on every level. Even the souvenir programs were gorgeous! And Disney Hall was the perfect venue for the presentation.

But, just as with the concerts at Lincoln Center, (and just about every other one I’ve attended my whole life,) I was the only one bopping along! (Outside of the Maestro, of course. He had some pep going on there! More on him in a minute.) How can people sit still during these rousing renditions?! [Note: The woman next to me finally bopped along with me, in unison, I might add. But she chewed gum the whole time, which made me crazier than I already am! There is no gum-chewing in the theatre, people!!!]

I’ve rarely seen someone love playing his or her instrument as much as Maestro Peter Guth did when he picked-up the violin every now and then. He’s the Keith Urban of symphony!!! 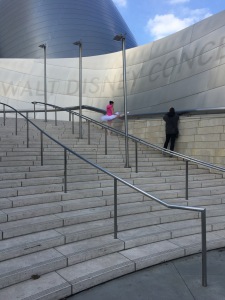 A dancer warming-up outside the edifice, pre-show. Photo by Karen Salkin.

I love that they dimmed the theatre lights only part-way for the entire concert. It was the first time in the history of ItsNotAboutMe.TV that I could see the notes I was writing! (And also what everyone was wearing. I was so glad that we dressed way up for the occasion!) In the old days, I used the concert lighting to write letters to pen pals. At least now my notes are professional.

On what some many might call a “shallow” note, (but, in my world, these things are important,) I have to laud some of the “beauty” touches of the day. One of the flutists polished her short nails with sparkles, even though most audiences members wouldn’t even notice them. And many of the female musicians wore boots or heels that were absolutely gorgeous. And the last dress worn by soprano Lara Ciekiewicz was the most stunningly shiny dress (and wrap) that I’ve ever seen! And I’ve been to tons of awards shows!!! I really appreciated all those efforts. 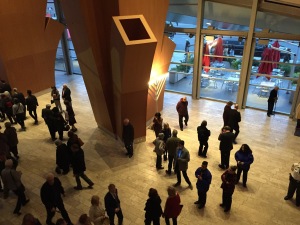 The crowd pouring out of Disney Hall, in front of the giant menorah. Photo by Karen Salkin.

Seriously, the entire production was perfect from start to finish. (Except that someone forgot to give a bouquet of flowers to Lara at the end, when they gave them to all the other femmes. She handled it well, though, with a lot of humor.) And we ended the afternoon by all singing Auld Lang Syne ensemble. (Even the gum-chewer next to me stopped chewing long enough to sing with us! And she had a really beautiful voice.)

If Salute To Vienna goes for their twenty-first year in 2018, I will be there again, front and center! And I hope you will join me. [Note: I’m so sorry that I don’t even have one picture of the actual concert to show you, because it was so visually gorgeous, which concerts usually are not. But I respected the wishes of the powers-that-be to not take any, and the company itself didn’t have any! Such a shame, all the way around. Fingers crossed for next year, though!] 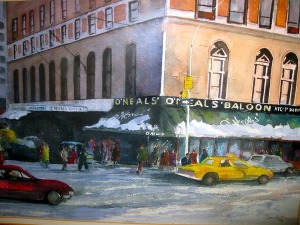 An artist’s rendition of O’Neal’s Baloon. (Apparently, no actual photos of it exist.)

Okay, folks, here it is—the “Baloon” story, as I know it. Actor Patrick O’Neal and his partners owned several eateries in Manhattan, back in the day. The one directly across from Lincoln Center was named O’Neal’s Salon (before my time.) A few weeks after it opened with that moniker, the state liquor authority told them that they would not grant them a license for a “saloon,” for some reason or another. So, rather than go to the expense of changing their giant sign out front, they chose instead to just add some pieces of material (I think it was just cardboard, actually,) to the “S” to turn it into a “B” and call it “Baloon.” Either they did not realize that they were misspelling “balloon,” or they didn’t care. Either way, I’ve always been fascinated with it. (I found-out the other day that some LA pals of mine were waiters there back in the day, and we had a good laugh when I reminded one of them about that little episode in its history.) And there you have it!