Trending
You are at:Home»MOVIE REVIEWS»MOVIES: MALEFICENT: MISTRESS OF EVIL
By Karen Salkin on October 28, 2019 · MOVIE REVIEWS

Despite the fact that I adore humanitarian Angelina Jolie, I’ve never seen the original 2014 Maleficent, which is the story of Sleeping Beauty told from the perspective of the infamous villainess, so this sequel was a treat to me. In all honesty, the only reason I decided to see Maleficent: Mistress of Evil is that it’s playing at my favorite theatre, the El Capitan in Hollywood. 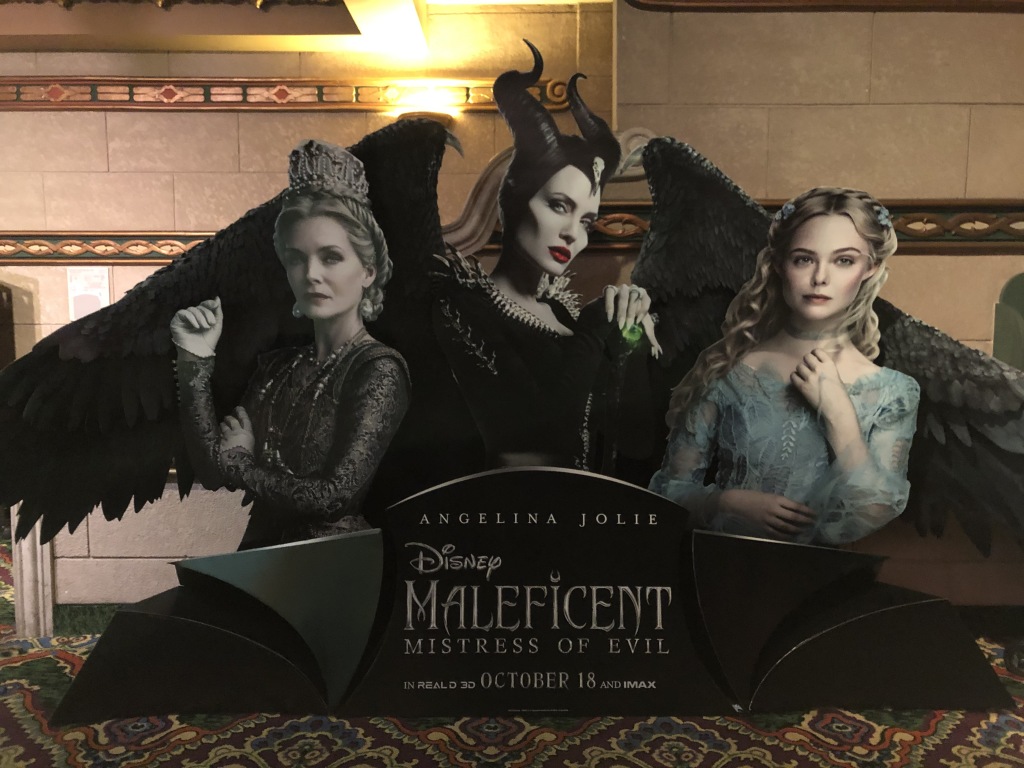 Even though it will be running there until mid-November, I had to see it on opening night because I was leaving for New York right after, and I didn’t want to see it anywhere else. So I was lucky enough to attend Opening Night; it’s always extra-exciting to see a film at the El Capitan with all those rabid Disney fans. And there are so many little perks involved. So let’s get to all the excitement, including what awaits all of you who are going to see it in the next month or so. 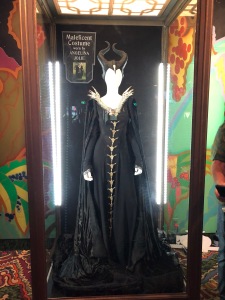 As soon as you enter the building, you notice a display case with Maleficent’s magnificent costume. It’s wonderful to get to see it so up-close like that.

If you move further into the lobby, you come upon a giant stand-up floor display of the three female main characters, which is impressive. You can, of course, take pictures in front of it.

But do not forget to go downstairs for a major photo op, either before or after the film. There’s a giant display of Maleficent’s wings which you stand in the middle of; that way, they look like they’re coming out of your body! If I hadn’t seen others doing it before me, I don’t know if I would have realized to do that. So you guys are already ahead of the game because I just gave you the heads-up. 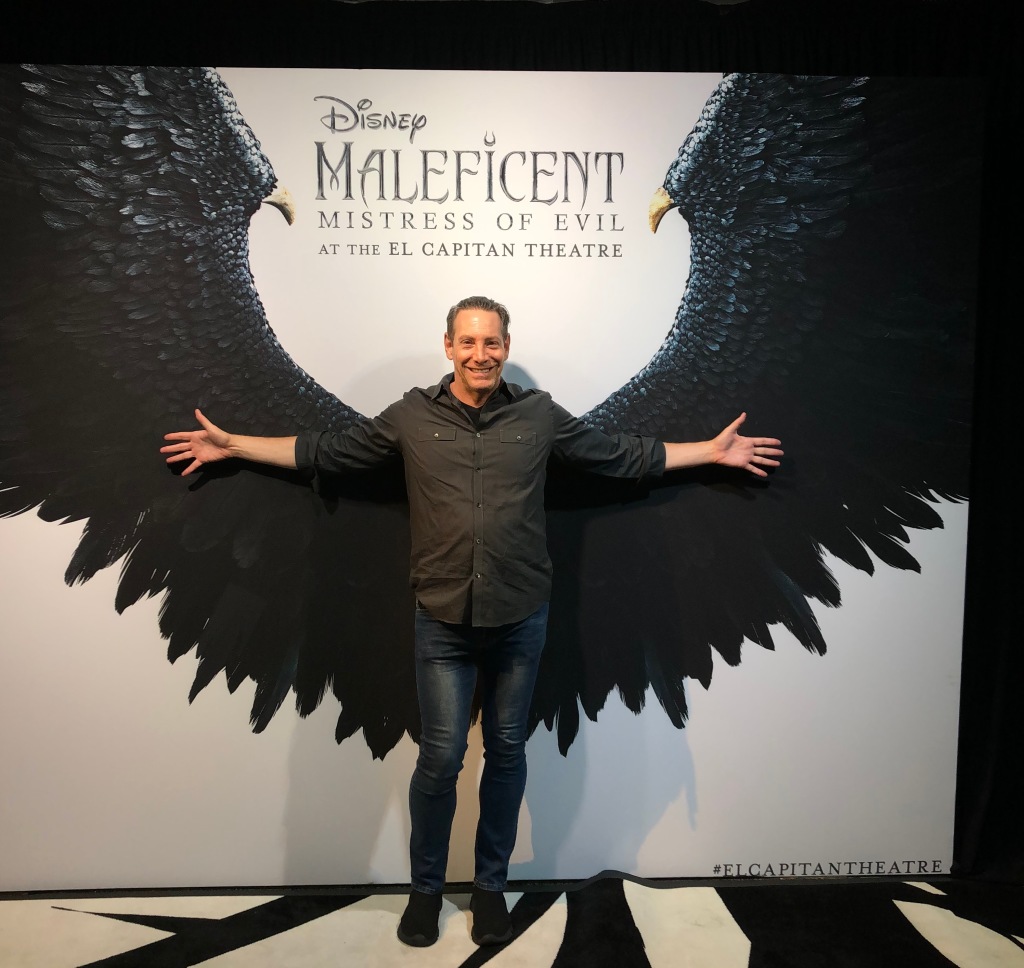 A guest, trying out the Maleficent wings. Photo by Karen Salkin.

As with most photo ops offered at the El Capitan, there’s a member of the staff on hand to snap the pix for you. In this case, it’s best to make it a solo shot because of the wings, but it’s still fun to take a duo or group shot, as well, just for the memories. (Or social media, of course!)

In that same lower lobby where the wings poster is, you can also view several costumes and props from the film. And there are beautiful photographs from the stunning sets.  I went down there before the show, so seeing them gave me a lovely portent of things to come in the movie I was about to see. But it would also be entertaining to view them after, so that you can recognize each scene depicted.

I was actually most interested in seeing some of the tiny displays, such as Aurora’s engagement ring. (On a personal note, it looked just like one that Mr. X had gotten me years ago. The short version of the story is that I was the jewelry host on a really stupid shopping show back then, and when I was showing that attractive ring, I said something like, “If someone loved me, they would get this for me.” It was just the baloney the writers made me say, but Mr. X was watching, and he thought it was a clue to him. So he called the number on the screen, and not only paid full price and tax, but shipping and handling, too! On a ring I could have gotten for almost nothing. But the good news about it is that now Aurora and I have something in common—super-generous boyfriends!!!) 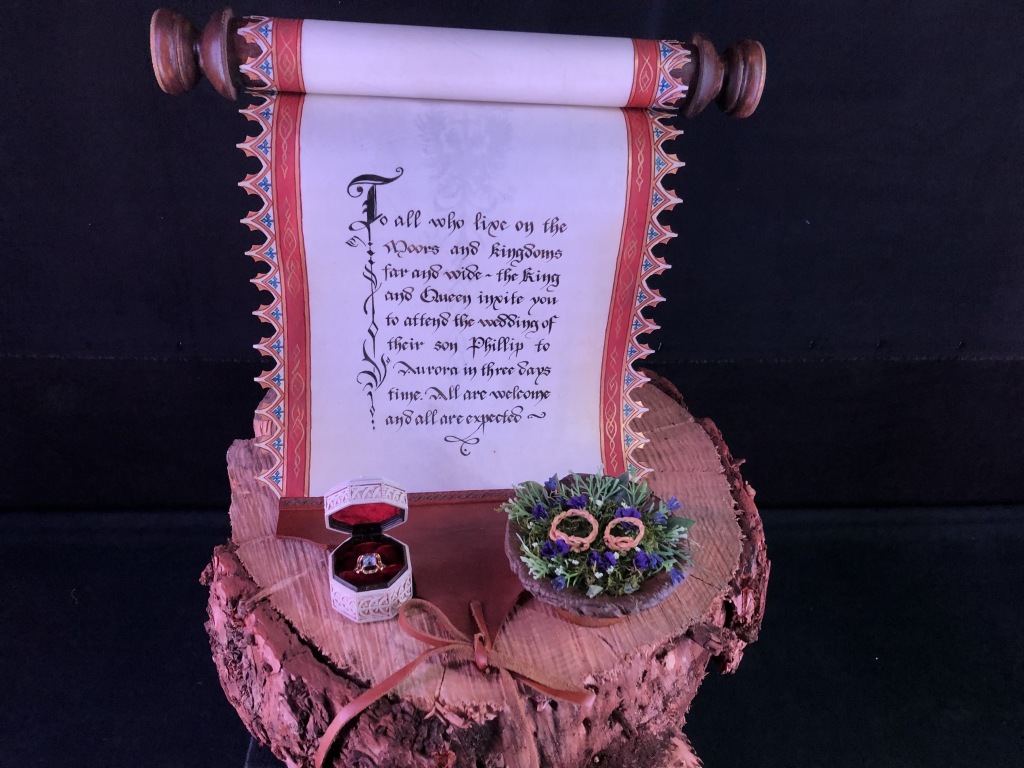 Since most Opening Nights at El Capitan are usually designated as a Fan Event, let me tell you what extras we were treated to for Maleficent: Mistress of Evil, to show you why you should want to attend one for another film at that special theatre. Before the film, they raffled-off some fun Maleficent merchandise to lucky winners. (We each received a free raffle ticket on the way in.)

Then they invited all the guests who showed-up in costume to go up on the stage for all the world to see and admire.  I’m always amazed at the creativity of these audience members. My friend, Marc, actually thought that one girl worked there because her ensemble was so perfect!!! 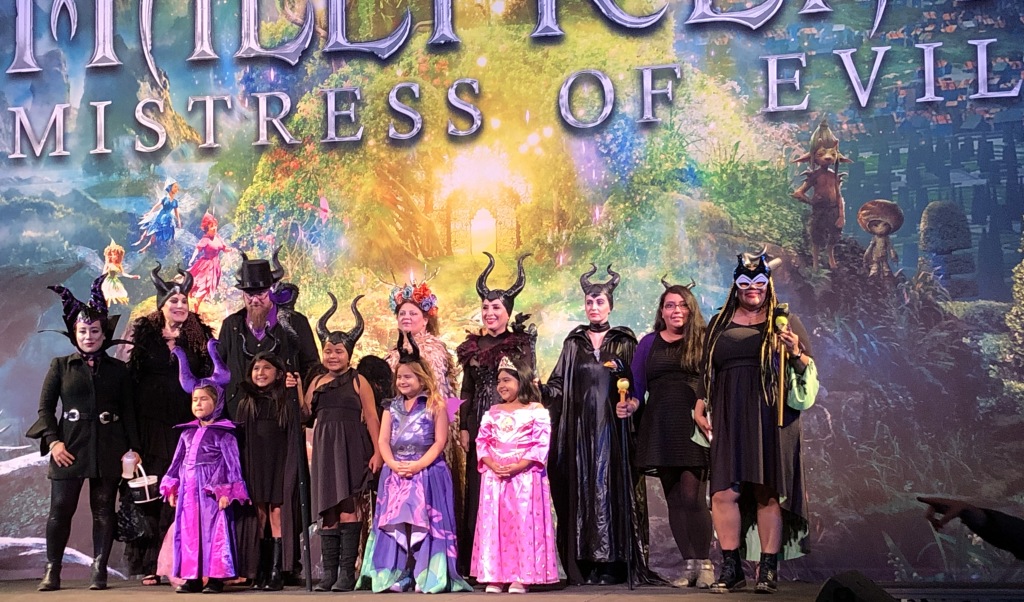 Then we got an interesting surprise—the movie’s director, Joachim Rønning, came out and chatted with us about his work. And then he did something unexpected. We had all received cardboard Maleficent horns on the way in, and he asked us to don them so…he could take a selfie with us!!! How clever.

But please, please, please, potential audience members—be polite to the people behind you and take off all horns before the film begins, whether the theatre gives them to you or you wore your own! (When I saw a special showing of the original Disney cartoon version of Sleeping Beauty at the El Capitan a few months ago, one woman told the manager that she couldn’t take her horns off because she had them intertwined with her hair! So that manager very smartly moved the woman to the back row, so the people who were behind her originally could see the screen, and she got the woman candy and soda for cooperating. That was a great way to handle the situation. But please just be considerate of the people behind you in a theatre to begin with!) 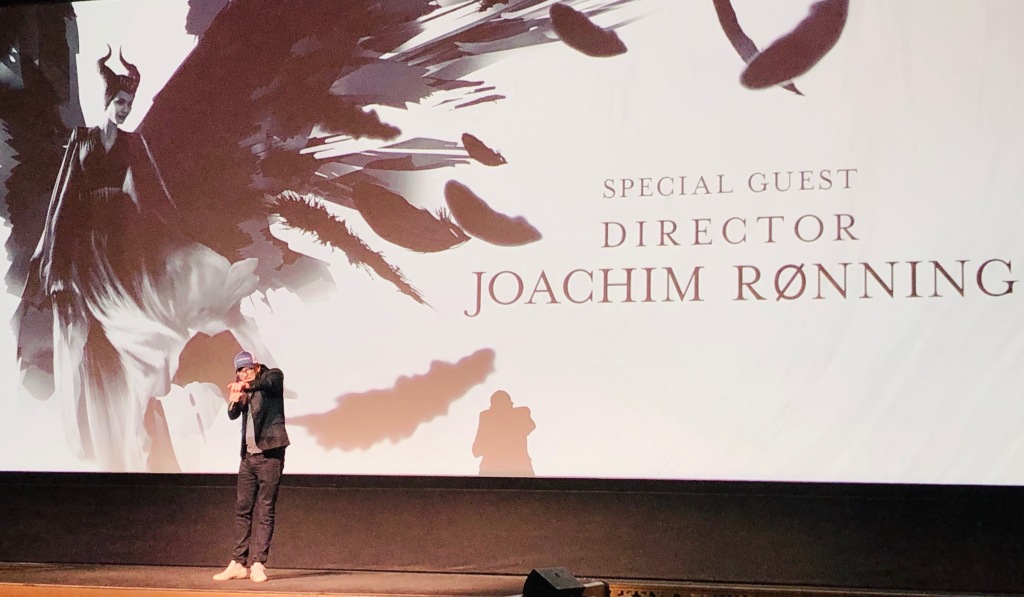 As we exited on opening night, on top of everything else that we had already been offered, (including free popcorn and a drink,) we also received a beautiful Maleficent poster and an item they referred to as a “souvenir popcorn container,” but is big enough to be a decorative catch-all for a kid’s room! (Or mine!) And it’s really attractive.

No matter when we see Maleficent: Mistress of Evil at the El Capitan, you’ll be sure to appreciate your experience there. That’s because they have the best screen and sound system around.

And, by the way, the movie is really good, to boot! I adore Angelina, and she does not disappoint. So it’s a big win, on every level.

Maleficent: Mistress of Evil at the El Capitan running through November 17, 2019
www.elcapitantheatre.com