Trending
You are at:Home»MOVIE REVIEWS»MOVIES: ALADDIN AT THE EL CAPITAN
By Karen Salkin on May 30, 2019 · MOVIE REVIEWS

ALADDIN AT THE EL CAPITAN

I just saw Aladdin, and I loved it!  But if you see it anywhere but the El Capitan, with it’s humongous state-of-the-art screen and fabulous sound system, and where the opening of the curtain is a show in itself, you’ll really be missing out. I’m so glad that Mr. X and I saw it at that iconic Hollywood theatre, because the experience is so enhanced. Even the trailers are special on that screen!!! 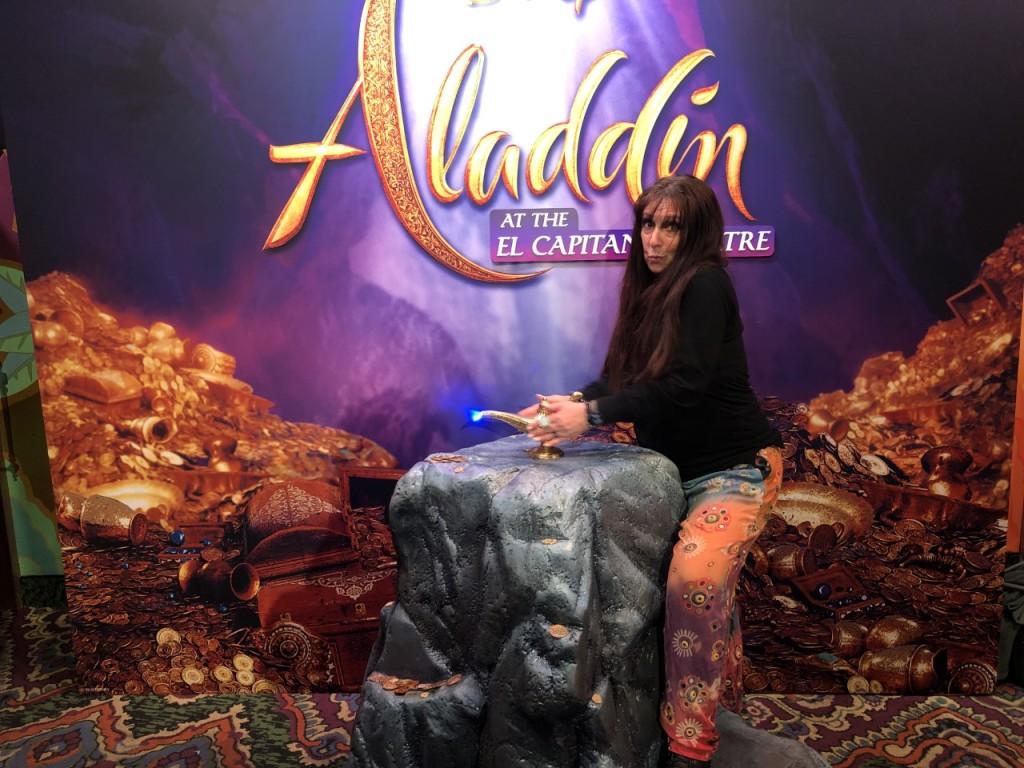 As always, going to the El Capitan is more than just viewing a movie; they provide an overall magical experience, one that is unique to each film they’re screening. In the case of Aladdin, the second we entered the lobby, we were greeted by a charming photo op. On a “rock,” surrounded by “jewels,” was the famous Genie lamp! I stepped behind it for Mr. X to take my pic, and I was surprised by the fact that, as I rubbed it, (as you’re supposed to do with genie lamps, of course!,) the end not only lit-up blue, but smoke came out of it! What fun! (And I got to make three wishes. I’ll let you know if they come true, knock on wood.) 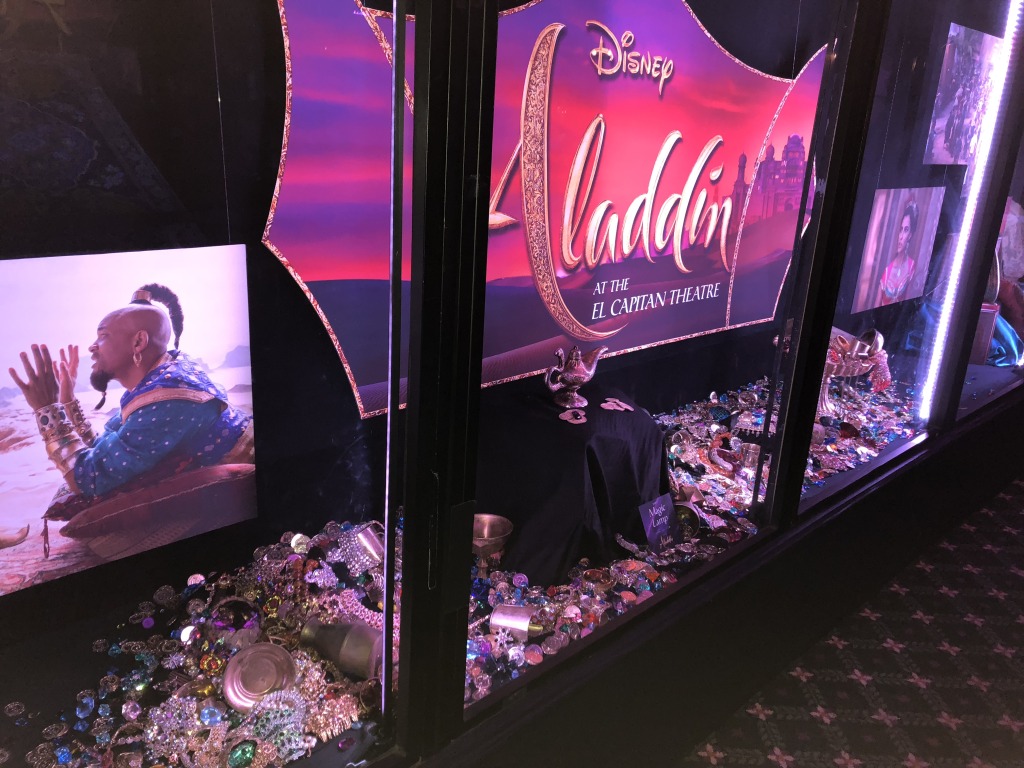 Part of the Lower Lobby display. Photo by Karen Salkin, as is the one at the top of this page.

Then we visited the costume and prop exhibit on the Lower Lobby. It’s great to be able to see the actual artifacts that are used in the film we’re about to see! And for kids, it gives them things to look for, which hones their observational skills. 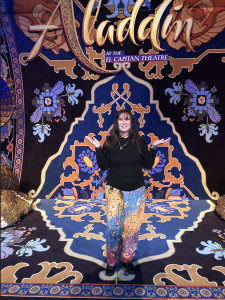 Karen Salkin, posing on the Magic Carpet on the El Capitan stage. Notice how prescient she was to wear Indian pants that match the carpet, with no prior knowledge! Photo by Mr. X.

But I think the perk that all the guests love most this time is one that is available before the screening only. Everyone who’s there on time gets to walk onto the El Capitan stage, (which is a trip in itself,) and have their picture taken (on their own phones or cameras) on/in front of the Magic Carpet inside the Cave of Wonders!

So to get all that done, make sure to arrive at least a half hour prior to the start time of the showing of Aladdin that you’ve chosen. Trust me on this. [Note: The lamp op and lower lobby display are available after the movie ends, as well. But the Magic Carpet on stage is not, so plan accordingly.]

I have one fun note to share about the concessions. Mr. X stopped eating popcorn several months ago. Even the most famous brands, that I often have in the house, do not entice him anymore. But the second he saw, and especially smelled, the El Capitan freshly-popped kernels, he could not hold himself back. That is truly superior popcorn, kiddies! And getting it in a plastic tub that commemorates the movie you’re seeing makes it even more fun. I use them as catch-alls all over my abode, which gives them two purposes—they organize my make-up, jewelry, knick-knacks, etc., and give me wonderful El Capitan memories at the same time! 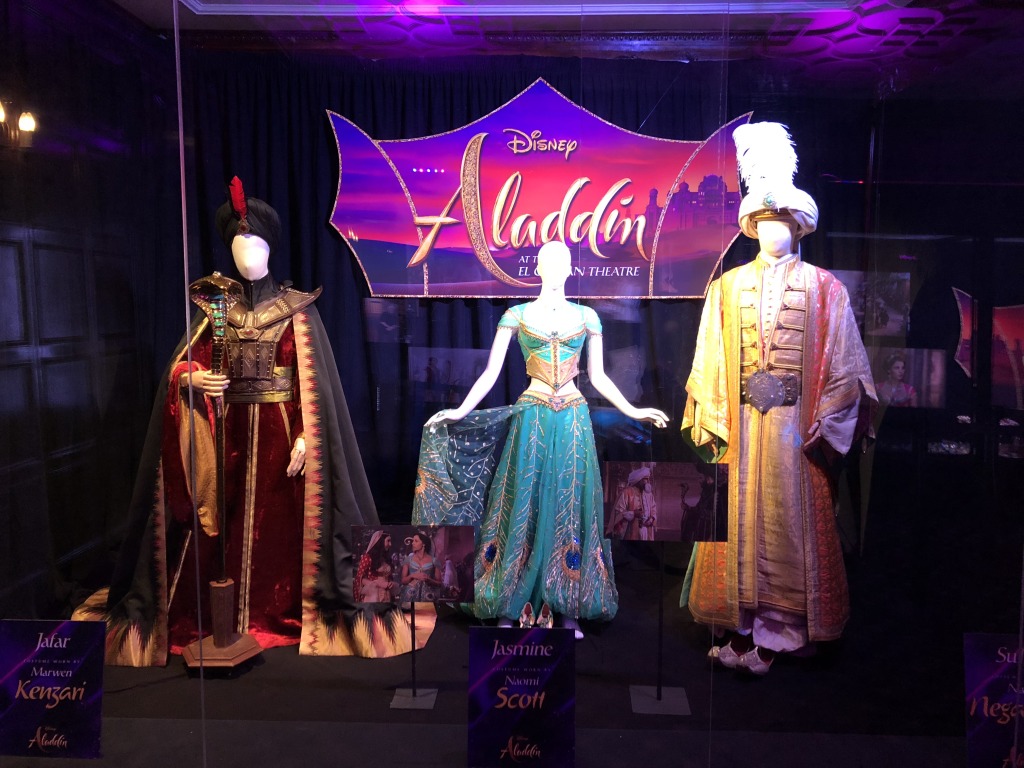 Some of the Aladdin costumes on display at the El Capitan. Photo by Karen Salkin.

And just in case you’re wondering—Aladdin is really fun! I’m not a Will Smith fan, in general, but he’s excellent in this film. And the girl, Naomi Scott, is stunning (she’ll next star as one of Charlie’s Angels,) and can really sing. And the guy, Mena Massoud, is also adorable. And has gorgeous teeth, which I always appreciate.

But I was crushed when I found-out the monkey is not real. (Nor is the tiger. Duh.) And it should really be at least ten minutes shorter. But Mr. X and I were laughing a lot, grabbing each other in the scary parts, and loving every minute of it! The musical celebration when the prince arrives is spectacular, in every way! (I’m actually pretty shocked that director Guy Ritchie was able to pull it off so well. What an accomplishment for him! Who knew he was capable of such whimsy?!)

So there you have it—I highly recommend Aladdin. But only at the El Capitan!

Aladdin at the El Capitan running through June 16, 2019
www.elcapitantheatre.com