Trending
You are at:Home»EVENTS»MOVIE/EVENT: THE NIGHTMARE BEFORE CHRISTMAS AT THE EL CAPITAN
By Karen Salkin on October 23, 2018 · EVENTS, MOVIE REVIEWS

THE NIGHTMARE BEFORE CHRISTMAS AT THE EL CAPITAN

Hollywood’s El Capitan theatre made the opening night of the 25th anniversary of Tim Burton’s The Nightmare Before Christmas exciting from the get-go! The place was packed and the entire crowd was upbeat, as I imagine they’ll be for every showing of this classic animated film. Before the event, I really had no idea it was so beloved. (How is it even possible that it’s been around for a quarter of a century now??? I have friends who’ve been alive for shorter than that!) 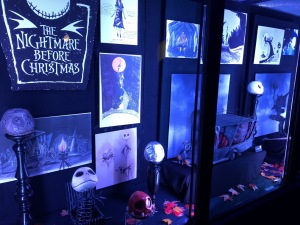 Part of the informative display. Photo by Karen Salkin, as is the big one at the top of the page.

For this Halloween month engagement, the movie is shown in 3D, with some very interesting 4D effects, (which I didn’t even know was a thing!) I absolutely love 3D, and this is the perfect film for it. I won’t spoil it for you and tell you what the 4D effects are, except to say that they’ll surprise you.

As usual, the El Capitan has an auxiliary visual exhibit on the lowest level of the theatre, which can be viewed before or after the film runs. Or both! And there’s a colorful backdrop for photos in the lobby. A lovely touch is that a member of the El Capitan staff is always right there to take the pictures for you, so your entire party can be in them together. And on opening night, everyone was taking advantage of that perk! 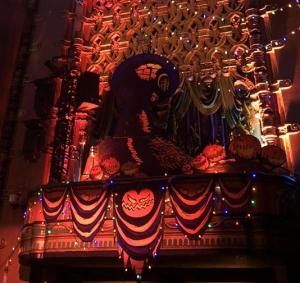 One of the decorated side balconies. Photo by Mr. X.

I was wowed by the wonderful decorations that are all over the actual auditorium, making it a Halloween wonderland. There seemed to be something special in every area—on both side balconies, above the stage, and even low down on both sides of the stage. Mr. X and I noticed something new every time we looked around!

There were several opening night entertainments before the screening itself. The evening began with the famous El Capitan organist, playing appropriately spooky tunes, such as Cruella de Ville and a couple from Phantom of the Opera. That talented guy was followed by a barbershop quartet, who introduced The Nightmare Before Christmas producer, Don Hahn. [Note: I don’t know what’s planned for the rest of the run, so check with the theatre when you purchase your tickets. But I think the organist will be performing for the duration.]

Don then hosted a costume contest. I hadn’t realized that beforehand, so I thought that I was going to be the only one paying homage to Halloween that night, with my clever Halloween shirt, two kinds of skeleton earrings, and several orange and black bracelets, (not to mention my glow-in-the-dark socks!) But I had nothing on the rest of the audience! I was thrilled to see that so many attendees were fun enough to wear at least an appropriate tee-shirt! 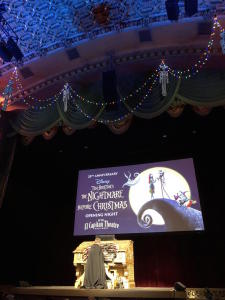 The organist, (and top of the stage decorations, too!) Photo by Mr. X.

But the contestants were the ones who went all out. The winner was a little girl who was dressed like Sally, the girl in the movie. But Mr. X and I realized that I look just like her naturally. Well, if I had had a nose job, that is. But the waist-length auburn hair and non-existent chin are a match. And her eyes are blue, too, except her color is on her eyelids, rather than her eyeballs. (Perhaps I shouldn’t be writing this in the middle of the night, when I got home from the theatre, because I may just be a tad punchy.)

You might think that all that frivolity was enough, but you would be wrong. Don introduced the director of The Nightmare Before Christmas, Henry Selick, along with one of the animators, Mike Belzer, and the trio shared many stories and insights about the making of the film, along with visual aids. I’m shocked about this myself, but that educational segment was my favorite part of the evening! And I’m glad that they spoke before the film, so we knew what to look for. Very special. They ended it with a video message from Tim Burton himself.

The movie is only seventy-six minutes long, which is perfect for the very short attention spans in this day and age. And now that I’ve seen it in 4D, I can tell you that it’s the only way to see it! And the El Capitan is the only theatre to see it in, of course!

The Nightmare Before Christmas at the El Capitan running through October 31, (of course!) 2018 www.elcapitantickets.com