I’ve seen just about every film that’s in contention this year, except for At Eternity’s Gate and Black Panther. But I’ve had no time for full reviews this go-round. (Sorry about that, readers.) So, before Sunday’s Oscars, here, finally, are my tiny takes on many of this season’s offerings. (For my thoughts on all the proceedings on Oscars Sunday, please make sure to follow me on Twitter before then. @MajorCelebrity. And check back here on Monday for my entire wrap-up.)

The first three are my favorite films of the year, by far, but after that, the rest are in no particular order: 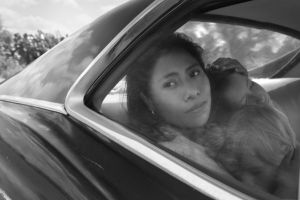 Roma—This is film-making at its best! I believe the full title of a lot of these actual awards is something like “Best Achievement in…,” and as we were watching it, I said to Mr. X, “What an achievement in filmmaking this is!!!” He and I saw this movie from Mexico almost two weeks ago, and our heads are still reeling from what writer, director, producer, cinematographer, and editor all rolled into one, Alfonso Cuarón, was able to accomplish! And, although the star, Yalitza Aparicio, had never acted before, she was perfection!!! I did enjoy Green Book more, but Roma really deserves to win Best Picture. And, as Mr. X said, too, we had never rooted for a Sound winner before, but these peeps deserve every award in the book! (It didn’t hurt that we saw it in a special surround-sound screening venue!)

Girl—This foreign film from Belgium, although nominated for nothing, is the second best film of the year! The boy star, Victor Polster, should have been nominated for everything!  His was the jaw-dropping knock-out performance of the year!  Why has no one but me been talking about him?!  (Don’t believe me?  Well, that’s Victor in the photo at the top of this page, on the left in that trio!!! Now do you believe me???) 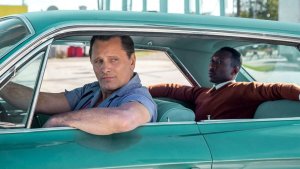 Viggo Mortensen and Mahershala Ali, two of the hardest names to type!

Green Book—My absolute fave!  It’s so good, in fact, that I’m thrilled I chose to see it as my birthday celebration!  And I can’t wait to see it again. I’d really love Viggo Mortensen to win the Best Actor Oscar, and I know that Mahershala Ali will win the Supporting one, although he really should have been in the Lead category, as well.

The Favourite—This tale is a tad strange, but when I researched the topic after, I discovered that it’s basically a true story.  Who knew?! (I guess the screenwriters did—duh.) But the nominations are skewed—Olivia Colman, who plays the Queen, should have been nominated for Supporting, as opposed to Lead, while the converse applies to the nods for Rachel Weisz and Emma Stone. Hollywood, eh?

A Star Is Born—I was never not aware that she wasn’t Lady Gaga on that screen, which is not good.  Otherwise, this one is okay, but it’s far from the amazing film that people make it out to be.

BlacKkKlansman—Of main interest in this one is that star John David Washington sounds exactly like his father, Denzel. But his work here doesn’t show him to be a special actor, which makes the movie sort-of long and tedious, even though it’s a positive true story of good triumphing over evil. 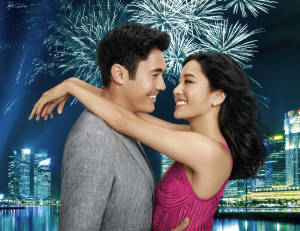 Henry Golding and Constance Wu, who looks a heck of a lot younger in this film than she does on her TV show!

Crazy Rich Asians—This one is not at all what I expected!  I thought it was going to be a crazy comedy ala The Hangover, maybe because I knew that Ken Jeong is in both.  But it surprised me by being a charming romantic comedy.  With a gorgeous leading man in Henry Golding, which, of course, made me like it even more.

Bohemian Rhapsody—I liked this one more than many people did, but less than the rest of the viewers.  It’s interesting enough, and Rami Malek does an excellent Freddie Mercury, although he really does not deserve all the awards he’s winning, when this season’s acting jobs of Christian Bale and Viggo Mortensen are far superior to his. As far as the story goes, since two Queen members were the consultants, I assume most of it is true, but it didn’t really get to me.  (I’ve never been a Queen fan, except maybe now that they feature Adam Lambert.)  I thought that Gwilym Lee, the guy who plays Brian May, is spot-on, though. (And I’m thrilled for Adam to get to sing on the Oscars because of the renewed interest in Queen! That boy has sure come far since I first met him singing in small shows around town.)

If Beale Street Could Talk—This one is so boring and depressing.  Yes, Regina King is excellent in it, as is the entire cast, but it’s sooo slow.  And being real, I feel that the only reason it’s getting any attention at all is because of the involvement of Barry Jenkins, who won the Oscar for Moonlight a couple of years ago. 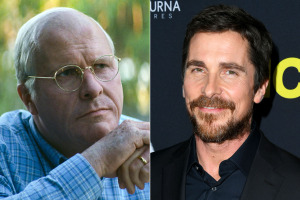 Christian Bale on the right as himself, and the left as Dick Cheney!!! How miraculous is that?!

Vice—I thought that that is really creepy Dick Cheney on the screen!  I never once thought it was really Christian Bale—that’s how great he is in this otherwise semi-boring film.

The Wife—For the first three quarters, I kept wondering what the fuss about Glenn Close was.  She’s good, but nothing special.  But the last quarter showed me what is up.

Can You Ever Forgive Me—Which is what the producers should be asking me for making me watch it!!!

Beautiful Boy—This one is too depressing for me to be able to even evaluate the performances.  But chances are when you play a young drug addict, you’ll get nominations, as Timothee Chalamet has.  (But did you notice that with this, and two other “important” films this year, Steve Carrell couldn’t get any nods?)

A Quiet Place—See this one only with someone you want to hold on to!  It’s scare-yyy! 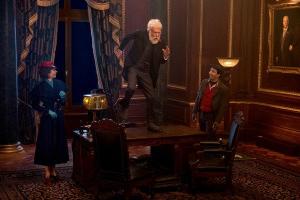 Dick Van Dyke–I guess he was mvoing too fast for anyone to get a good snap of him!

Mary Poppins Returns—This is a sweet film, with fun special effects, and Emily Blunt is charming.  I hate to say this next part, because I’m such a fan of his, but Lin-Manuel Miranda is sort-of miscast.  I think he’s in there solely for his star power. But seeing the great ninety-one-year-old Dick Van Dyke dancing on a desk makes any little annoyance worth seeing this one.

The Frontrunner—Which it definitely is not!!!  Obviously, since most of you have never even heard of it!  (I always do love me some Hugh Jackman, though.)

If you’re interested in some more of my opinions, I’ll, as usual, be live-tweeting the Oscars this Sunday, beginning with the arrivals at 3PM.  So you might want to follow me on Twitter now; that way you won’t miss any of my bon mots, for the Oscars or ever!  My moniker on there is @MajorCelebrity, (of course!)