Trending
You are at:Home»EVENTS»MOVIE REVIEW/EVENT: THOSE PEOPLE
By Karen Salkin on May 11, 2016 · EVENTS, MOVIE REVIEWS

Having appeared in a handful of indie films myself, I can tell you firsthand just how much blood, sweat, and tears go into making them. So, I really appreciate a good one! 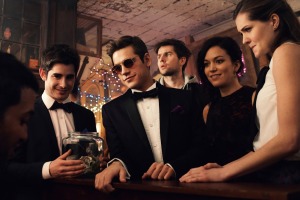 Photo by Vanessa Lenz Neithardt, as is the big one at the top of the page.

That’s the case with Those People, Joey Kuhn’s very first feature film.  (He wrote and directed it.)  I rarely tell you what a movie, or play, is about, but this official description is so perfect, I just had to include it: “On Manhattan’s gilded Upper East Side, a young gay painter is torn between an obsession with his infamous best friend and a promising new romance with an older foreign pianist.” I could not have summarized it better myself. That’s exactly the plot.

It’s a love story involving gay males, and even though their sexuality is a major part of it, the story is constructed so that it could have easily been a heterosexual one.  That design is something to be admired. 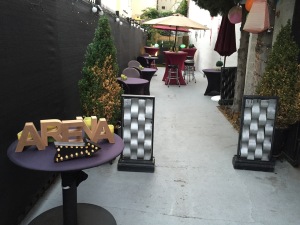 The Arena Cinema courtyard, where the reception was afterwards. Photo by Karen Salkin.

Also earning my admiration is the venue the screening was in (where you can still see it yourself for a few more days,) the Arena Cinema in Hollywood.  I’ve written before about how I enjoy the whole vibe of this intimate theatre, and I think everyone in L.A. needs to experience it for themselves.

So, it’s the perfect location for the exclusive Los Angeles run of Those People, the review of which I’m getting back to right now.

I loved seeing all the New York locations, and there’s something about the way it was shot, (although I found most scenes to be too dark, lighting-wise,) that made me feel a part of it. The characters do not feel like strangers. 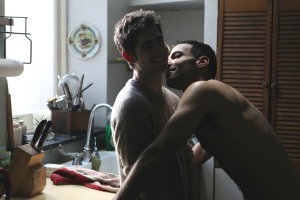 And the casting, by Susan Shopmaker, is spot-on. In addition to the excellent performances, the four guys in it are all attractive, which is always good for a film. The trio of leads could not be more perfect for their roles. Jonathan Gordon seems like he actually is that young, innocent, Jewish artist, Haaz Sleiman makes the perfect handsome older suitor, and I can envision Jason Ralph getting a zillion parts playing the rich bad boy, with a lot going on under the surface.  The CW—here he comes! (Or, at least, he should!) He reminds me of a young Matt Damon. 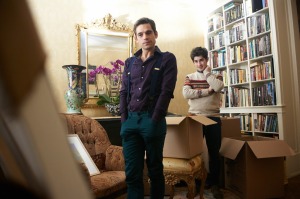 There’s one little directorial touch I really appreciate, which Joey said was a very conscious decision on his part. It’s the non-use of modern technology, which is something I hate being distracted by.  But I believe that Joey did it so that the film would have a timeless feel. I knew the timeframe of Those People is today, but, since I’m the opposite of cell-phone-obsessed, I didn’t even realize that we see nary a cell phone nor computer on screen until a house phone rang in one important scene, and made me jump! I spaced-out for a minute, wondering why a rich twenty-something guy would have a house phone these days, and then I remembered that he was living in his parents’ house. (By the way, in addition to our cell phones, Mr. X and I have five landlines in our abode! The sound is just better on them. And they come in handy in emergencies, like power outages and…earthquakes! The weird thing about that is—we rarely even talk on the phone! Ever! But, we’re covered if ever we get on a chatting jag.)

Those People is a very worthwhile first film, so I totally applaud Joey Kuhn and company for their work. If you’re not in LA or New York, (where it’s also running this week,) look for it on DVD soon. It’s worth seeing, and you get to be in on a filmmaker’s career from the get-go, which is always exciting. 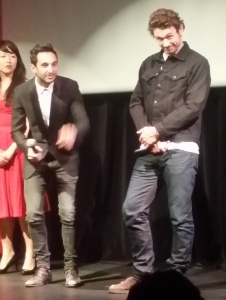 But, the evening wasn’t over when the credits rolled. Not by a long shot. You know that I always stay for Q-and-As when offered, because I like to learn from the talented peeps, but this one was even more special than the norm. It was moderated by none other than James Franco! For reals. He and Joey are pals from NYU Film School. How cool is that?! He was the most different (and strangest and most fun) interviewer ever at these things.  In other words, he was exactly James Franco! The whole thing was so entertaining, and informative, that it went by in a blink. Joey’s explanations of everything were just perfect. (Except that I learned much more about gay sex than I would have liked. Perhaps some things should remain a mystery to me. But he made even that commentary a bit amusing.)

When it was over, we adjourned to the inviting Arena Cinema courtyard for a relaxing beverage reception.  I went back into the theatre for a few moments, and had a lovely chat with Joey Kuhn, not just about his work, but also our shared experiences of growing up in New York, and living in Brooklyn, too.  And about falling in love with our own best friends, although mine worked out a tad better than his, since my bestie was…Mr. X!  And I got him!!!  (He always says that he feels like something out of Wild Kingdom hearing me say that!)  Oh no–I forgot to tell Joey that I also graduated from college in Providence, Rhode Island, where he attended Brown.  (We’re like twins!)  But now we’ll have even more to talk about if I bump into him again.  Or, better yet, have the privilege of being directed by him!  (From my mouth to God’s ears.)  As long as my love interest is one of those cute guys from Those People.