This movie really doesn’t need big in-depth analysis. I can sum it up like this: fabulous dancing, the best 3-D ever, crap story, worse acting, and even worse dialog. Period.

If you need deets, there are but a few. I saw it at a very private screening with a mainly geriatric audience. I give them tons of credit for hanging in there. I really expected to see an empty theatre when the lights came on at the end, save for my krumper bf and me. 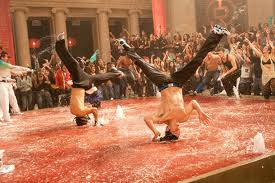 All the dancing is phenomenal–I don’t know how these people do it! Nor can I wrap my head around that there are so many dancers capable of these moves. The 3-D makes everything even more mind-blowing than it already is.

I must say, though, that a couple of the girls, like the one who’s so desperate for attention that she makes her hair pinkish-red, are nothing special at all, and just clutter up the area. And, though the lead girl, who plays the character Natalie, is not even close to as awful as the infamous Karen Lynn Gorney in the old school Saturday Night Fever, I don’t get why she was cast–there had to be better girl dancers and for sure better actresses. Though there’s not too much anyone could do to not look foolish saying these dopey lines.

I just wish the whole picture was dancing only, with no dialog. It and the story itself are beyond lame. I wrote better lines for my sixth grade Christmas play!!! For real. My advice to potential audience members is to just rest up during the non-dance parts. Then let your mind get boggled when the moves kick in. And then go home and forget the whole thing. The end.