I love this theater! It’s so cozy and comfortable. So what a pleasant surprise it was to find-out that they show films there. 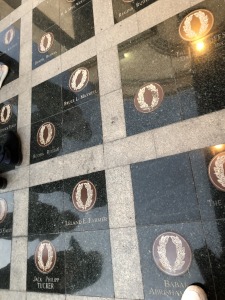 I’ve been to Theatre Raymond Kabbaz many a time in the last few years, but always for dance, music, or some special presentation. So when I recently discovered that they also do the occasional movie screening, I wanted to see one there.

I was really interested to see how they do it, since I had noticed only a stage before. (But it turns-out they have a screen, as well.) So when TRK showed Holy Lands a couple of weeks ago, (an appropriate choice in the month of Passover,) ahead of its June 2019 release, I was happy to attend because advance screenings are always a plus in my book! They make me feel like I’m in with the in crowd. (But mainly I like to see films early, before anyone can try to foist his or her opinion of it on me!)

I also knew the film’s star, James Caan, way back in the day, so the combination of a new movie with him starring, and seeing it at this theater, drew me in. 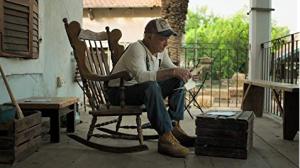 But sadly, Holy Lands is pretty much a waste of time–the venue was the star.

I wondered why a French theatre in Los Angeles was showing a film about New York Jews, (one of which I am!,) and Israel, and I never got to the bottom of it. But as I was looking for images from the internet to accompany this review, I came up with two possible reasons. One is that James Caan received an honor in France recently, and the other is that I noticed the film is also dubbed in French. So, there’s a French connection somewhere!

Holy Lands was a novel first, by Amanda Sthers, who directed the film, and spoke after the screening. There are way too many storylines in it, with far from enough focus on any one of them. And overall, I found it to be very confusing, and just a very unimportant story. 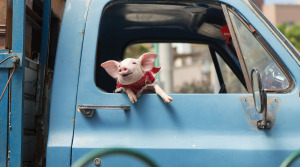 How cute is that little pig?! He’s the star of the film, as far as I’m concerned.

It’s basically about a dysfunctional Jewish family in New York, (wait—is there any other kind of NY Jewish family?,) whose patriarch now lives in Israel as a pig farmer. Go figure. [Note: In an interesting real-life parallel, Caan’s father was a meat dealer and butcher in a borough of New York City!]

So the action takes place in both locations. I was actually relieved every time they switched over to images of New York City. I felt like I was back in civilization after all those scenes of rural Israel. (I’ve never been to that country, but I’ve heard that it’s beautiful. So I don’t know if the settings shown are representative of it or not.) 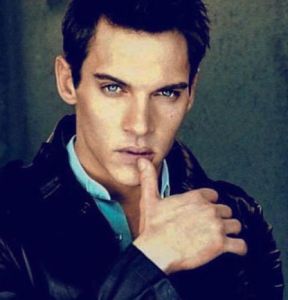 The stunning Jonathan Rhys Meyers. (This is not what he looks like in the film, but I couldn’t find a good image of him in it.)

Near the end of the film, I flashed back to James Caan’s portrayal of dying footballer, Brian Piccolo, in the old TV movie, Brian’s Song, which is the first time I ever saw him. And I immediately knew he would be a star. [Note: He had worked a lot before then, but those roles were before my time, so I had never seen him, nor even heard of him, before.]

There are two fun aspects of Holy Lands for me. One is the farmer’s relationship with his little pig, who is just adorable. I have a couple of stuffed animals he reminded me of.

The other is that I got to gaze upon the gorgeous visage of Jonathan Rhys Meyers! OMG, is he beautiful! I didn’t even realize he was the one playing the son for most of the film. But it didn’t matter—I was happy every time he appeared. I didn’t even really mind that his character is not nice.

But the best part of the night was the cute, appropriate snacks that the staff sold in the courtyard before we even entered the theatre. There were ham and cheese baguette sandwiches, (ham for the pig aspect, I’m sure,) and black-and-white cookies, which just about symbolize Jewish New Yorkers. I got such a kick out of those little nods to the movie.

But that’s how it always is at the eclectic Theatre Raymond Kabbaz; whether or not you become a fan of the entertainment you’re there to see, you will always still enjoy yourself at that venue!