Hollywood’s screening season is upon us once again. And I’m so glad that this year, I began it with a film I actually enjoyed!

For those of you who don’t know, Get On Up is the story of “The Godfather of Soul,” James Brown. (I can’t imagine that there’s anyone reading this who doesn’t know it, but just in case, “get on up” is the main lyric in one of Brown’s iconic songs, that’s really titled Get Up (I Feel Like Being A) Sex Machine. But most of us just call it Get On Up. It mean a lot to me because it’s the song that my Aspen friends requested in clubs when I was just too tired to dance anymore; it worked every time.) A more perfect title I cannot imagine! 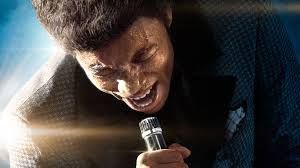 Chadwick Boseman as James Brown in Get On Up.

This movie is good enough, and lots of fun, but not really great. That’s mainly because I hate when biopics don’t tell the truth. It’s just confusing, especially to young people. I saw an old movie about the outlaw Jesse James when I was younger, and, of course, took it for gospel. When I saw another one about the same dude, I thought they had it all wrong because it was so different. It’s just wrong to do to the public. So, to all filmmakers, I say: just tell the truth! If it’s not colorful enough for you, so be it! But stop making things up!

I also dislike that this story was told out of order. I know that films have to do that to grab the audience’s attention right away, and hold it, but it’s annoying. This one was especially so because they keep going between years constantly, not just starting-out backwards. If James hadn’t sported different hair-dos, I would have been even more confused! (They do write the year on the screen, but so briefly that it didn’t really help me.)

The last problem is that Get On Up really needs subtitles! I understood only about a third of the dialogue. I think I’m spoiled by closed captioning on TV. And I’m someone who cares about every single word. But still, at least half of the dialogue was not understandable. Part of that was that James Brown himself was hard to make-out, and Chadwick Boseman did James’ voice perfectly, but since they fabricated so much of the story itself, they could have also made believe that James spoke less mumbly, and let us in on his supposed words. I’m just sayin’.

Speaking of Chadwick, let’s get to the positives already! He was phenomenal! He got the total essence of the man down, including his movements and aforementioned speech. I could not believe that someone so young could come up with this performance.

I initially had no idea that he was so young, by the way. Or not tall! He spoke after the industry screening I saw this film at, and both Mr. X and I were shocked at his height. He’s listed as being six feet tall, but he appeared much shorter in person. On the screen, though, his tallness, (he looked to be around six three,) was almost ruining it for me, since the real James was not a big man.

And I did not expect Chadwick to be so young, at all. I had seen him previously in only 42, playing Jackie Robinson, (does this guy ever play any fictional characters?,) and also assumed then that he was in his early forties, I think because of that also-strong performance. But he’s only thirty-two! And yet he played James brown way into his sixties or seventies, with no believability problem whatsoever. I haven’t seen any other films yet this season, so I don’t know how any other actors performed in films to be up for consideration, but I believe that Chadwick Boseman will definitely be in the nominations conversations.

And, of course, Mr. X and I loved the music, he even moreso than I. I hate to admit it, but I was never a big James Brown fan. The sound of his music in a big theatre, though, was fabulous. Too bad that we were the only two moving and grooving. How do so few other actors have so little soul? I was left scratching my head over that conundrum.

Mr. X thinks that Chadwick actually sang the last song in the film, Try Me, because if that was a lip sync job, it would have been too perfect, but we have yet to ascertain the answer. (So, if any of you know it, please share in the Comments section, below.)

So, whether or not you’re a James Brown fan, or even just a music one, you have got to get on up and go see this film! And, if you’re like me, bring your dancing shoes!