This summer has brought an interesting crop of Celeb Sightings. So let’s just get right to them:

7/13/14 Bruce Vilanch at the opening night of Buyer and Seller at the Mark Taper Forum. We seemed to be the only two getting our cars from the valet, eschewing the post-show get-together. Bruce told me that he had already seen everybody he wanted to by just standing around the theatre, and I had to get home to write the review of the show before I forgot all my thoughts on it because the show moved along so well that I never took notes during it! (By the way, if you missed it, you can read my review of it here: itsnotaboutme.tv/news/theatre-buyer-and-cellar.) 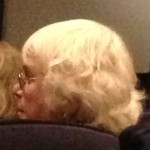 7/14/14 One of last year’s Oscar-nominated actresses, June Squibb, at the first industry screening of Get On Up in Beverly Hills. She was just sitting in the audience, along with the rest of us Screen Actor’s Guild members! How refreshing! 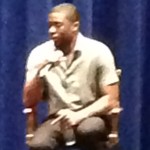 7/14/14 Chadwick Boseman, who starring as James Brown in the film Get On Up, speaking after the above-mentioned industry screening. Both Mr. X and I were shocked to see how young-looking he is in person, and even moreso, how not super-tall he is. In the film, he looked to be at least 6’3”, which was ruining it for me a bit because James Brown was short. But, even though Chadwick is listed as six feet, he looked closer to 5’9”! (If you missed it, you can read my review of the film here: itsnotaboutme.tv/news/movie-review-get-on-up.) 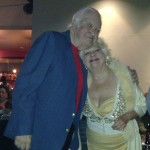 7/17/14 The opening of DTLA’s new eatery, Bourbon, featured some old school celebs, like Renee Taylor and Chuck McCann. (If you missed it, you can read about the event here: itsnotaboutme.tv/news/eventdining-bourbon-dtla-opening.) 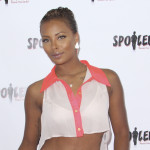 7/26/14 Eva Marcille, perhaps the most gorgeous woman in the world, hosting a kiddie fashion show at Siren Studios in Hollywood. I had no idea who she is, but a fellow attendee clued me in on that she was an early America’s Next Top Model winner, as well she deserves to be!

7/27/4 Gary Busey and fam having a snack at the Malibu Arts Festival in, of course, Malibu! Duh. He actually didn’t even look that crazy, but rather like just a basic family guy.

8/5/14 Ed Begley, Jr. at the Westfield Mall in Sherman Oaks. He was sitting on a bench outside the Apple store, staring intently at his phone. Something about his casual appearance and demeanor made it seem like he was waiting for a companion who was shopping. I recognized that behavior because that’s what I always do while Mr. X is getting his technology on inside that shop!

8/9/14  Alana Stewart (who was once married to George Hamilton and Rod Stewart,) (but not at the same time—duh,) leaving an eatery in the Beverly Glen Center.  She appeared to be pushing a baby carriage, which I assumed held a grandchild of hers.