I still don’t get the title of this Best Picture Oscar nominee, but… (I actually researched it and found that no one else seems to know to what it refers, either. ) Many people told me they don’t want to see a movie “about 9/11,” but that’s not what it was. I’m not really sure what it was about, or what purpose it served, but 9/11 was just the reason the young boy lost his father and embarked on a crazy (and not in a good way) journey. 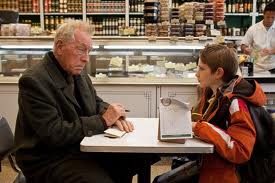 The rest of the audience at the industry screening of Extremely Loud, Incredibly Close seemed to be sniffling away their tears the whole time, but the film just did not get to me, until near the end. Perhaps my indifference was because I didn’t love Thomas Horn, who plays the boy, and is in just about every frame. He had never acted before, and was discovered by the film’s producer when he won on Kids Week Jeopardy. I didn’t know that at the time I saw it, so it’s not like I’m a snob about actors; his acting just did nothing for me. (But he was excellent in the scene where his whole journey came gushing out to the old man, played by Max Von Sydow, who said the kid did that in a row!!!)

Or maybe it was that the whole film was on the same level, especially the narration and melancholy music. The latter was driving me insane! I thought it would never stop!

Spoiler alert: the rest of this review has many clues about the story, which could ruin it for you, so please don’t read it unless you’ve already seen the film or plan not to, or just don’t care.

The whole premise is so stupid because I can absolutely guarantee you that no one in New York City would open their door to a little boy, so that was ruining my enjoyment of it. (Of course, the end explained that that wasn’t really the case, but I was annoyed for two hours until they got to the explanation. And it wasn’t like the brilliant end of The Sixth Sense, where we hadn’t realized there was anything to explain! There were no holes in that one, so the ending came as a startling surprise.)

There were just too many holes along the way in Extremely Loud, Incredibly Close, like the mother not listening to her own phone machine on 9/11, and letting a little boy (who’s not “right,” to boot,) galavant all over the city on his own.

At one point, he even mentions that he was tested for Aspergers Syndrome. (But he used a different word instead of “syndrome,” which I thought was rude on the part of the screenwriter.) So, if the mother knew he had some emotional condition, why would she take his word about the phone machine on 9/11??? I wouldn’t even take anyone’s word now!

There was one giant hole that the writer could not explain away–the underestimation of the time it took to get to Brooklyn on foot. Trust me on this one—it would take all day to walk to Brooklyn from most parts of Manhattan!!! Unless he lived right over the Brooklyn Bridge, which he did not, and all the people he visited lived right on the Brooklyn side of it, which they also did not, he’d still be trying to get to them as I write! Especially the family with the horses! Where the heck was that supposed to be, anyway???

More real holes: the kid should have aged. And how did he develop film from an antique camera??? I can’t even find a place to develop my 35mm film from five years ago!!!

Big spoiler alert coming, so if you were brave enough to read to this point, maybe you should skip this paragraph if you haven’t seen the film, although I think that any fool who sees it should figure this one out: Who didn’t know that the “renter,” as he was called in the film, would turn out to be the boy’s long-lost grandfather??? I was shocked by the gasps from the audience when that was revealed. I knew who it was before I even saw him!!!

Now to the rest of the cast: it was almost an hour until the “intro” of the film was over and Sandra Bullock got to finally do something. But it was the best acting she’s ever done. Surprisingly, (only because I had always been so fascinated with Michael Oher’s story and had wanted to buy the rights to it myself,) I’ve never seen The Blindside, the movie she won her Oscar for, so I can’t totally judge her previous abilities. But the clips of it didn’t show hers to be an Oscar-worthy performance. (I actually hate saying any of that; she’s one of the nicest actresses I’ve ever gone up against, when we were both starting-out, so I’ve always liked her. And, FYI, neither of us got the beyond-stupid part we were up for. And it was even based on my show! And I didn’t get it! Show biz.)

Co-star, and Oscar nominee for Best Supporting Actor, Max Von Sydow was great! But that’s no big revelation. (BTW—I was shocked by just how many of my pals had no idea who he is!!! I guess I hang-out with morons.) The big deal here is that he did it all without uttering even one word. I missed his big booming voice in the film, so I was especially thrilled to hear it in person at the post-screening Q-and-A. [Note: I can’t believe that the few friends I have who have heard of him mis-pronounced his last name!!! I hate that. It’s See-dow.]

Having just lost my mother, (and in New York, to boot,) perhaps this was not the smartest film for me to see. But Mr. Von Sydow said it was a “story about hope” and “how to come out of grief after a loss.” If that would really help, I’ll go banging on strangers’ doors when I’m back there in March. (But New Yorkers don’t have to worry—I know it won’t help, and perhaps would even get me arrested.)

And even though director Stephen Daldry sure knows how to wring that pathos out of people, I think I’ll stick to sports for my tear-jerking moments. Linsanity, anyone???