[Note: In this week’s run-up to the Golden Globes, followed closely by the SAG Awards, I’m dedicating this whole week to movie reviews. Since I’ve had the privilege to serve on the Screen Actors Guild Nominating Committee this year, I’ve gotten to see all the important films prior to their releases. I’ve already reviewed a few for them earlier on this season, and now I’m trying to get to most of the rest in the next month or so. At this point, I don’t know which of them are already out in theaters, but I hope I’m publishing these reviews early enough to help my readers with their decisions of which films to see, and which to skip. And unlike most other movie critics, I’m not here to give you my “Cinema 101” analysis; I’m just letting you know how good or bad it is.] 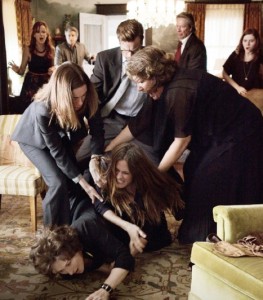 First of all, I’ve always hated the title August: Osage County. Yes, I know it won the Pulitzer Prize and a number of Tonys, (and soon, perhaps some screenplay awards, as well,) but it’s just annoying. There are a zillion better ones for this story. (I’m not even going to make any jokes here; I’m just expressing my disdain for the moniker.)

I had seen the play four years ago at the Ahmanson Theatre here in L.A., and it didn’t do much for me then, either. The friend I brought to that opening was jumping out of her skin over it, though; she even returned to see it again a week later! I guess watching a super-dysfunctional family, (one perhaps even worse than mine, if that’s even possible,) just doesn’t appeal to me. My lack of enthusiasm may also be because I didn’t even find their particular nuttiness very interesting.

But I’m a major Meryl Streep fan, so I had high hopes for the screen version of August: Osage County. (It’s even making me a tad queasy typing that stupid title.) I saw it at the first big industry screening of the film, way back in early November. It was held at one of the real movie theatres in Westwood Village, and I was joined by about seventeen hundred other show biz professionals. Most everyone else seemed to enjoy it. I was one of the few who barely chuckled as it wore on.

But now, two months on, insiders are confessing to me that they agree with my early assessment of it, that I put forth in some of previous columns on the awards races. You can read some of it here: itsnotaboutme.tv/news/awards-showskarens-rants-plea-to-voters-of-this-seasons-acting-awards, but in case you don’t have the time, here’s a bit of what I wrote then about this film:

“…what I have to say about August: Osage County, (which I know is going to, if not win everything this season, at least be nominated,) is that even with that cast of excellent actors, all I saw was the ‘acting.’ It was just all too much continuous scene-chewing. But because of the budget for promotion, (you should see the stupid little cardboard house they sent us, separate from the DVD, for no reason other than to sway our votes because they’re not allowed to send actual gifts,) I’m sure at least Meryl and Julia will get nominated. And that they should not be.”

Yes, I said that my acting idol, the incredible Meryl Streep, does not deserve nominations for her portrayal of a poisonous mother to adult females. She was still great, but it was all too much. Her work in this story might have been perfect for the stage, where her characterization has to play to the top balcony, but not for film. I constantly wanted to yell at the screen, “Take it down a taste, Meryl!!!” She was actually verging on annoying.

And Julia Roberts was Julia Roberts. A few gray hairs on top didn’t change that. To me, she’s the same in everything. I like her enough, but I know what to expect. She never surprises.

The supporting cast was pretty good. Margo Martindale, (unlike her work on the pathetic sitcom, The Millers,) was pretty understated and real, Chris Cooper was his usual excellent self, as was Juliette Lewis, and Dermot Mulroney was as charming as ever in a role that was perfect for him. On the other hand, Abigail Breslin and Julianne Nicholson did nothing for me, and I still don’t get the attraction of Benedict Cumberbatch other than his unusual name.

And there you have it. I’m actually not trying to deter you from seeing August: Osage County. It may even make your own life seem less taxing that you think it is. But just know that if you’re less than ga-ga over everything about it, you’re far from alone. No matter what the various awards committees think.