Trending
You are at:Home»Uncategorized»MISCELLANEOUS: L.A. AND ME
By Karen Salkin on July 27, 2010 · Uncategorized 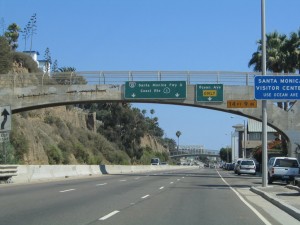 I know this isn’t a gorgeous picture of PCH, but every time I see this sign, which meant I was close to my original UCLA destination, I still get excited.

I do this same routine just about every year since I first showed up here (except for the few times that I’m in New York on that date, like I was supposed to be this year.) Here’s how I celebrate: I drive out past Malibu, so I can then drive down PCH, just as I did that first time. (I had already traveled cross-country, and was now coming to Los Angeles from San Francisco, of which I wasn’t then, and have never subsequently been, a fan. I’ve never had a good time there.)

I listen to the song that was playing the most on the radio that day, and look at the ocean and the beach as though I’m seeing them for the first time.

Then I get on the freeway to Westwood (the 10 and then the 405) and drive straight to 501 Gayley Avenue, the first place I ever showed up at in LA. (It’s a student apartment house, not a fraternity house, for those of you who were wondering. But I stayed at a few of those, too. Just as a boarder, I swear.)

I have someone take a picture of me in front of it. I try to have Mr. X or a friend meet me there for that purpose, but most often, I have to stop a stranger and try to explain what I’m doing. I’m always afraid they’ll call the cops and say a perv is crashing a student residence! (In the last few years, they have put a lock on the usually-open-to-the-world, entrance door. Am I perhaps the inspiration?)

Mr. X has suggested an appropriate conclusion to my commemorative tour would be a stop at a mental hospital. I’m afraid I may have to agree.

Sometimes, I have to modify my exact trip, for unavoidable circumstances. (Meaning the date or time, or having to take someone with me. My best companion ever was my young Rhode Island pal, Ronnie Hazel, Jr., who improv-ed my original arrival all the way with me, although he did add some questionable characters to the mix.) But never modified is my omni-present appreciation of LA. HAPPY ANNIVERSARY TO LOS ANGELES AND ME!