Trending
You are at:Home»Uncategorized»MISCELLANEOUS: I'M IN NEW YORK FOR THE NEXT MONTH
By Karen Salkin on April 24, 2013 · Uncategorized

I’M IN NEW YORK FOR THE NEXT MONTH

I’m happy to be in New York again, but this trip is bittersweet. This will be the end of my bi-coastal way of life, that I’ve had since I was a teen-ager.

In my late teens, I went to L.A., which was just supposed to be the final destination of my cross-country summer sojourn. (Actually, come to think of it, I had no specific plans; I just knew when I had to be home for the beginning of the college semester. I had given absolutely no thought to when or how I was going to get there!)

[Note to that last thought: I don’t whether to chastise my young self for being such a dunce, or be jealous of such a carefree existence!] 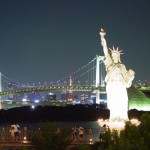 So, when I decided to stay in L.A., that was it. But I was a kid, and my family and friends were still in New York. So, I went back and forth forever after, with a brief stint in Rhode Island, as well. There has never been a year since that I haven’t been back and forth between the coasts. And that’s the way I like it.

To be honest, there were many years there, after I left, where I hated New York. Everything about it was a hassle. (And still is.) But then I told myself that I’m a lucky girl to be able to spend so much time here, a place that millions of people dream of getting to even once in their lives! And I’m so glad that I decided then and there to be grateful and always enjoy the ride.

And I’ve stuck by that. Even though I loathe deciding travel dates and making flight reservations more than anything else in the world, and I also hate leaving Los Angeles at any time because I have so much to do there, I know that I’ll be extremely sad to not spend three different months a year in the Big Apple.

More than missing my pals, the food, and the many social activities the great city has to offer, I’ll miss my house in Brooklyn. I don’t know any other adult (I just changed that last word from “grown-up” because I am definitely not that!,) who has lived at least partially in the house they grew up in for their whole lives. No wonder I abhor change and growing-up!

I never even moved my belongings out to California when I decided to stay there! So, I’m now cleaning-out memories dating as far back as my birth. Literally. I could truly open a Karen Salkin Museum. But, I’m so bad with money, the admission fee would be what I pay you!

Okay, I think I’m getting off track here. But me cleaning out my house should really be a reality show, though I don’t know how much I’m really willing to share. (For instance, Mr. X and I once found a list there, a very short list, I might add, of the guys I had had sex with, and how many times each. Next to the name of my first teen-age boyfriend, I had written something like “a million”–I told you I’m bad with numbers–and it went down to “a half.” We still haven’t figured exactly what that means, and I don’t think I really want to know.)

Of course, I won’t be doing any of it alone. It takes a village… So, I really want to thank, in advance, the pals who will be staying with me at the house, and working hard: Peter, Diane, Ronald, Sheila, Richard, Jeff, Ethan, John, Lauren, Taylor, Scott, Marcia, Jill, Cliff, Manny, Scott, Helen, Laurel, Lou, and Noelle. It won’t quite rival the time had in the Jersey Shore abodes, but we’re not there for fun, per se. And at least we’ll be doing this all before we turn into the Golden Girls! (And Guys.)

Okay, off-track again. I really just want to let you know where I am, and to let you know to look-out for all the upcoming columns about the East Coast fun I’m having. If there’s anything in particularly you want me to check-out, please let me know. You can do it as a Comment below, and just tell me if you don’t want it published.

And if you’re headed this way, and I know you but didn’t get around to telling you of my whereabouts personally, please let me know so we can be powerful jet-setters together! You won’t even have to help with the house!

[Note: you can always check me out on Twitter, @KarenSalkin, for the up-to-the-minute scoops on my trip.]