I often invite my web guy, Lou, to the many events I attend, which are frequently really fabulous.  He never cares to go to any of them, except for one—Millennium Magic at Theatre West in the Valley.  It’s the only event he’ll make time for all year!  It’s that fabulous!  And this annual show is happening again this very week-end!  Yay! 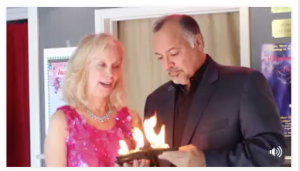 I won’t miss it, either, and neither should any of my fellow Angelenos.  It’s a fundraiser for the theatre, and is produced by two Magic Castle magicians, Jeanine Anderson and George Tovar.  Since the Castle is a private club, which most of you will never get into, (sorry to say that, but it’s true,) this is your one chance all year to see full-on professional magicians at work.  And each of the three shows features different line-ups, so if you see all shows, you’ll get your quotient of magic for the whole year!  (And you don’t have to dress-up and spend a fortune, both conditions of going to the Magic Castle, even as someone’s guest.)

If this year’s rendition is anything like the previous editions, many of the performers will be amusing, which I love.  And I have a feeling they’ll all be as uber-entertaining as their seventeen preceding presentations. 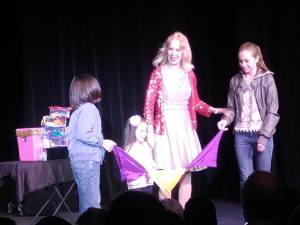 Jeanine Anderson with a trio of kid assistants in a previous show.

And all of the acts are appropriate for all ages, so bring the kids.  They (or you) might even make it up to the stage to assist one of the magicians.  (I always slump down in my seat when they’re scanning the audience for volunteers, because I’d rather watch someone else up there than be on stage myself.)

I absolutely love magic when it’s done well, as is always the case with Millennium Magic.  There’s no other art form like it.  And getting to see a variety of magicians in one short afternoon or evening is so special, even to jaded moi.

Here is the schedule of Millennium Magic performers, (in addition to Jeanine, who will do brief stints during all three shows, of course,) but please keep in mind that, as with all theatre, it’s subject to change:

Saturday November 18 (which is Jeanine’s birthday, by the way,) at 8PM–Brandon Scott, George Tovar, Elliot Hofferth, Aaron O’Brian, and Albie Selznick & Co., (whose full show I reviewed earlier this year; you can still read it here: itsnotaboutme.tv/news/live-production-magic-monday.) 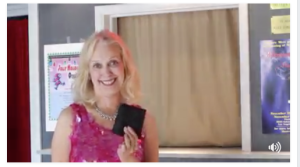 Looks like Jeanine Anderson performed some magic on her co-star’s wallet!

I wish I could see all three performances, but, as usual, I’m overbooked for the week-end. But, as I stated earlier, I would never miss Millennium Magic, so I’m thrilled that I’m getting to go to the Sunday matinee! I’ve done that one before, and I have to tell you that it’s the coziest feeling. This show is the perfect lead-in to the holidays!

I can’t wait, and neither can Lou. I hope to see the rest of you there, as well!