Trending
You are at:Home»MAGIC»MAGIC: RED THREAD
By Karen Salkin on October 9, 2019 · MAGIC

There are two ways I’m looking at this interesting new magic show. If this is the first time you’re seeing Siegfried Tieber’s incredible work, you will be absolutely amazed by his talent! If you saw his previous show, See/Saw, you’ll still be amazed but also perchance a tad disappointed because this one is not quite as fabulous. (But I’m being picky and comparing him to only himself.  That may be because he’s basically incomparable!) 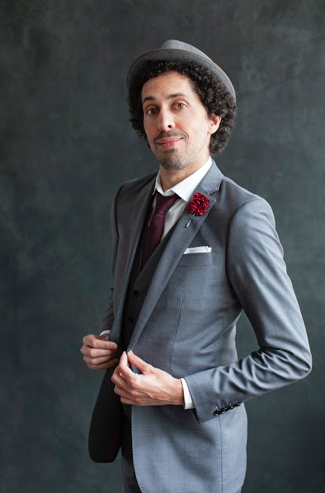 Siegfried Tieber. Photo by Brooke Opie, as is the one at the top of this page.

Red Thread is a different kind of presentation for Ecuadorean-born Siegfried Tieber, who is still the same charming, charismatic, talented magician I saw before. And, surprisingly, unlike most people I haven’t laid eyes on in a couple of years and then see again, he has not aged, not even a tiny bit! That is perhaps his best magic trick of all!!!

I had the pleasure of seeing him perform that other show two years ago, and it was entirely different. The magic this time is just as excellent, of course, but I have to admit that I enjoyed the last one a bit more. The very unexciting and low-key audience I was with this time was partly to blame; they were like a group on a senior citizen excursion in the midwest. (Except for a young girl in the top row whose gum had a ninety-minute workout!) That may be because I chose to go for a Sunday matinee, rather than a nighttime show, whose assemblage I can only assume is a bit more–how shall I put it–upbeat. (And the late show on Saturday nights must be a blast!)

One fun aspect of Red Thread is being part of a very intimate two-rows-only audience; just thirty-four tickets are sold to each performance, making it an almost-private show! That makes it so special. And, of course, part of that fun is getting to participate because just about every trick needs an audience member to help-out. 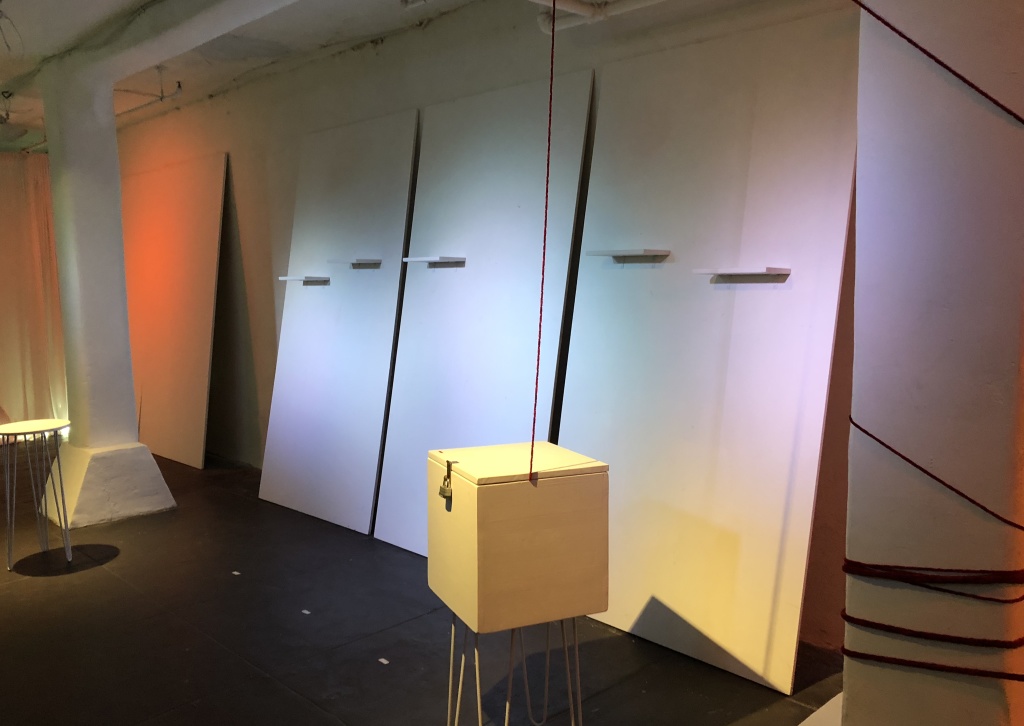 The stage area, pre-show, before Siegfried unveils all his interesting props. (Notice the red threads!) Photo by Karen Salkin.

But this was somewhat strange—on the day I was there, Siegfried kept calling on the same people over and over, leaving-out a quarter of the audience. At See/Saw, he engaged every single person in attendance, which made it much more enjoyable for me to not be worrying about anyone’s feelings being hurt. (But a lot of people were wearing glasses this time, and he needed people to read things, so that might be a reason for the exclusions.) 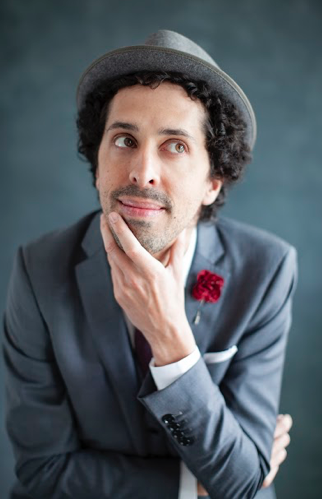 Siegfried Tieber, trying to conjure-up his next illusion! Photo by Brooke Opie.

So, judging Red Thread on its own merits, it’s an excellent show. I feel that it’s designed to demonstrate that Siegfried does more than just card tricks, no matter how jaw-dropping those are. To that end, he performs standing-up this time, (as opposed to sitting at a semi-circle table with the audience abutting the opposite side,) and showcases a lot of other kinds of magic, including mind-reading and working with Rubik’s cubes, the latter of which would take me five lifetimes to do even a small part of!

The final long routine of the hour-and-a-half show, (including a brief intermission,) which involves Siegfried’s memorization of books, is worth the price of admission alone. It’s unexplainable. I would see Red Thread again just to see him do that one astounding illusion!

Speaking of “threads,” I commend Siegfried (and his co-writer, Jared Kopf,) for trying to have a metaphysical one that connects all his magic in this show, which I assume they think makes it more interesting or mysterious. But that theatrical device is entirely unnecessary—his “tricks” are more than enough to keep us engrossed. I didn’t need to hear about “chance” and “choice.” We all know it’s solely his sleight-of-hand, and has nothing to do with us, so I would have preferred him to just get on with it. But that could be just me. 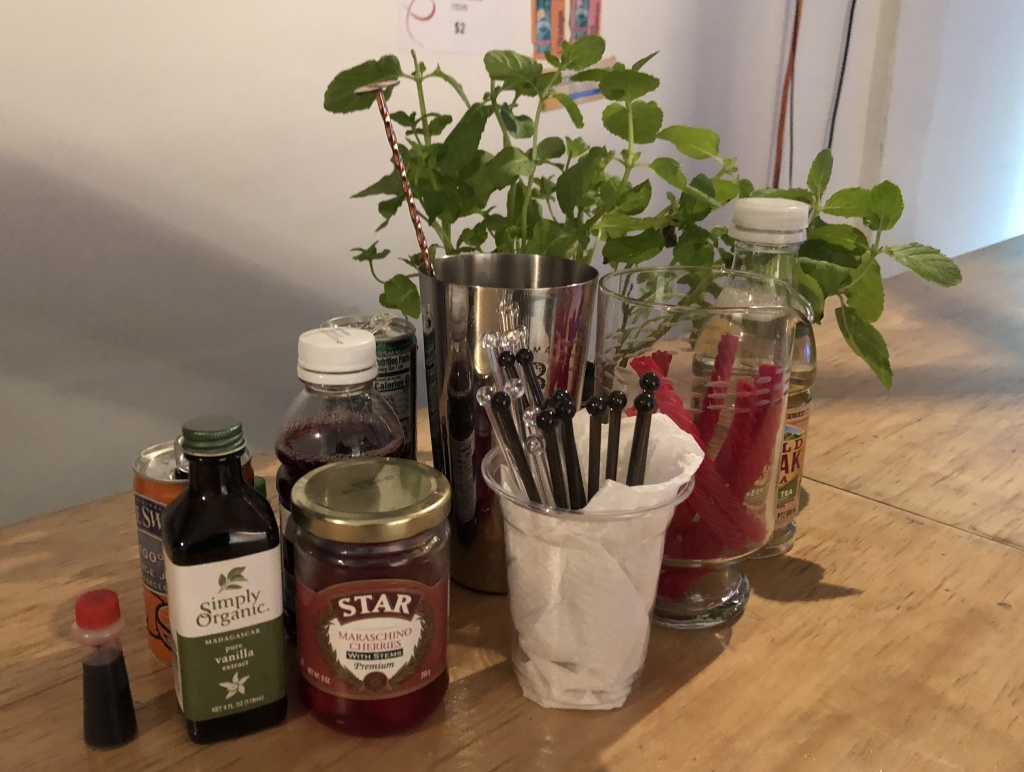 Part of the bar accoutrements, including a mint plant and Red Vines. Photo by Karen Salkin; composition by Nathan Pata.

The very amiable on-site bartender, Nathan Pata, (who charmingly spells his last name as “pretty awesome, totally awesome,” or something like that,) sees Red Thread every night, and told me that he still can’t figure-out even one of Siegfried’s tricks!  [Note: The bar, which is right in the same room but off to the side and in the back, (for a bit of refreshment before or after the show, and during intermission,) serves only non-alcoholic, but really creative, beverages.  And they use Red Vines, to go with the presentation’s  theme, as the stirrers and straws!  How very creative!] 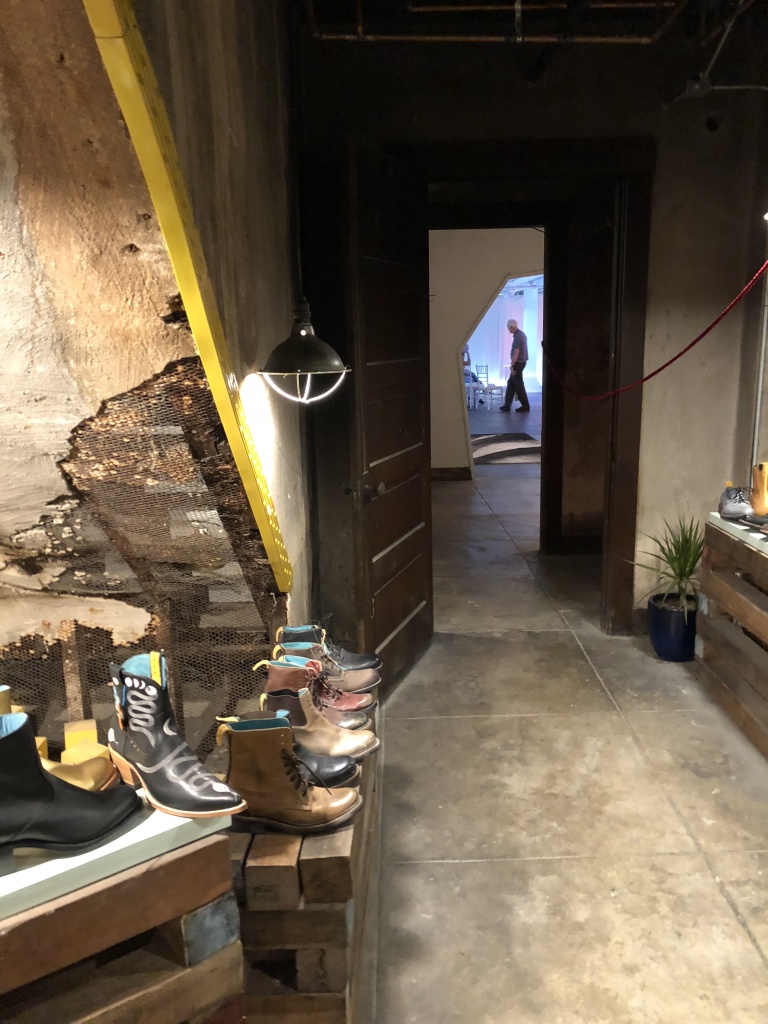 The secret entrance through the shoe store to the event space, which that distant man is standing in. Photo by Karen Salkin.

All this fun takes place in an event space that you can access only through a very hip subterranean shoe store in downtown LA, and has a bit of a “Joe sent me” vibe to it. Because I’m not a moron, and know how to read the maps and detailed pictures that the producers are kind enough to provide with the reservation confirmations, I had no problem recognizing the entrance, which is through an obscure alley. I actually love places like this.  But I noticed several other guests struggling to figure it out from the street, (which actually made the experience even better for me! Bi-atch, am I right?)

I also have to be kind and mention two conditions that might be difficult for some of you. The room is down a bunch of stairs. (Hence the description “subterranean”—duh.) And there is no air-conditioning, but even I was shockingly okay with that on an uber-hot day, so I’m assuming it won’t affect most others, either. But it’s always nice to be forewarned. (And there are two big fans they put on before the show and again at intermission.)

The directions could not be more clear, which I really appreciate!

No matter what else is going on with the surroundings, the magic is the attraction here. And that is the reason to see Red Thread. It’s a rare opportunity to see a master magician so up-close and personal. I never once spaced-out or checked my watch; I was mesmerized the entire time. And shocked when Siegfried told us he had been doing this art for only a baker’s dozen years! It seems like he would need at least a half century to become this good.

So I promise you that Red Thread is a very worthwhile experience. And hey, you may even purchase a pair of boots on the way out!