I’ve been writing this column for two weeks now, (because I think that putting it off will make the news be not so,) and just feel that I’m not getting it as right as can be because there’s so much good to say about Valerie Harper that it’s hard to whittle down to a normal-sized article. But I want to publish it already, so here it is.

My head is still spinning. I woke-up two weeks ago today to some of the worst news ever. The absolutely lovely, kind, happy, supportive, upbeat Valerie Harper has inoperable brain cancer. I thought I was still asleep. And wish that would have been the case. 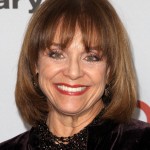 Every day I worry that something will happen to someone I care about. But I never expected this. I’ve been a fan of hers since I was really young, and I’m so glad I got to know her over the years. We first met through Mr. X because they worked together back in the day.

These are just a few unconnected thoughts about Valerie that have been running through my head, that I want to quickly share with you. Please forgive me if they’re not cohesive, but it’s all I can accomplish at the moment.

Years ago, when I hadn’t seen her for quite a while, I bumped into her backstage at the Pasadena Ciivic at a Christmas concert. I had been doing my show, Karen’s Restaurant Revue, for a year or so at the time, so a PR person had invited me backstage. I noticed that I was going down the stairs right behind Valerie and summoned all my courage to say hi, and remind her that we had met years before. So, I said, “Hi Valerie. I’m [Mr. X’s real name]’s girlfriend, and I want to say hi.” She stopped in her tracks, let out a small scream, and said, “You are not [Mr. X]’s girlfriend—you’re the funniest girl on TV! He’s your boyfriend!” I could not believe it. (And still don’t, especially because he’s so much funnier than I!) Her kind comments made me feel that I had arrived in show biz!

And from that moment on, we’ve always known each other. Many other show biz “fans” of my show have forgotten me over the years; once my temporary status as the ‘”it” girl was over, so was their knowledge of me. But not Valerie. She’s even nicer than Rhoda was!

A couple of years ago, Mr. X and I were at the Ahmanson, and someone grabbed me from behind, and said, “Hi, you two!” It was Valerie, rocking new bangs. I told her I loved them, and they made her look even younger. And she told me that she cut them thinking of me, and now saw why I wore mine like that for so many years. How lovely is that?!

She’s pleasant to everyone! Everyone! We were at an event years ago, where the NFL had hired me to do celebrity interviews for them. Being that I’ve known Valerie for years, talking to her on camera was a breeze. But there was some crazy competitive girl there, with her own crew for a personal project, and when she saw my gig, she tried to get the producers to fire me on the spot and hire her! She was insane, which everyone saw, but when she stuck a microphone in Valerie’s face, and made her do basically the same interview she had just done with me, Valerie willingly obliged. She came over to me after and told me she thought the girl was nuts, but she just couldn’t say no. All of it was so Valerie—being uber-pleasant to even someone she thought little of, but then also explaining the situation to me when she didn’t have any obligation to. Thoughtful all the way around.

Karen Salkin (R) with Valerie Harper and one of Val's funniest "Rhoda" co-stars, Ray Buktenica, at the after-party for "Looped."

I spent one of the most entertaining evenings in the theatre because of Valerie Harper in recent years. In July 2008, Mr. X and I went to her opening in Looped at the Pasadena Playhouse. It’s always a bit nerve-wracking to see someone you know perform, but we were put instantly at ease with her fabulous performance as Tallulah Bankhead. They couldn’t have cast a more perfect actress. And I’m so grateful that we had such a good time with her at the after-party. (You can read my original review in Beverly Hills People here: www.beverlyhillspeople.com/pages/theater_071108.html )

I have no doubt that Valerie will fight this illness as long as she can, and may provide us all with a miracle. If anyone deserves one, it is indeed she! So, please, let’s all spare a good thought for her, and keep our fingers crossed.