As someone who was in the circus once upon a time, and who also worked at the Magic Castle way back in the day, (for three big nights—it was not my cup of tea; but my friend who replaced me made a whole career out of it, so that was a win-win for us,) I really love magic. And, as it turns-out, so does my friend Jan. 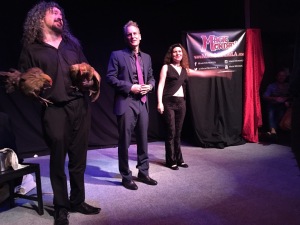 Andrew Goldenhersh (holding his friends,) Albie Selznick, (who is also the guy in the pic at the top of the page,) and a guest, at the curtain call. Photo by Karen Salkin.

So we were were very happy to go down to Santa Monica on Monday night for the opening of a weekly entertainment called Magic Monday. It’s an hour and half family-friendly show that features a couple of professional magicians each week, along with an occasional variety act, such as a juggler, marionettes, and perhaps even a ventriloquist! (The basic line-up each week is on their site, if you don’t like surprises.) So, you can attend every week and never see the same show twice! How special is that?!

The one constant is the host, Albie Selznick. After he welcomes the enthusiastic crowd, he does a few tricks himself over the course of the evening. On the night I saw it, most of his schtick worked, one (about a woman who died in that venue,) not so much. But no one really seemed to mind that little glitch. I think they were charmed by his discomfort. (Hopefully, he’ll swap that one out before you see it.) 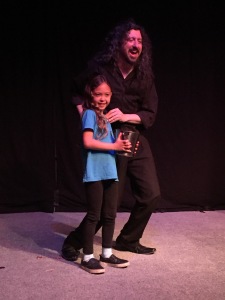 Andrew Goldenhersh with a special helper from the audience. Photo by Karen Salkin.

A nice aspect of Albie’s hosting job, (and the show in general, actually,) is that, due to his warm, easy-going approach, combined with the intimate layout of the venue, the whole evening seems less like a stage show, and more like a friend is just entertaining you in his living room. That made it a very cozy, casual experience, which Jan and I appreciated.

The guest magician that night was Andrew Goldenhersh, whom I had enjoyed a few years ago at the annual Millennium Magic at Theatre West. He’s fabulous. And I found-out at Magic Monday that he also plays a mean classical guitar!

To add to the fun, before the audience even enters the theatre, there’s a close-up magician who goes around the courtyard and does card tricks for every group, privately. That was actually our favorite part of the evening. We love being amazed by magic right in front of our faces! On opening night, Scotto Smith did the honors, and he was wonderful. 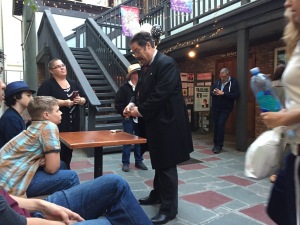 Scotto Smith entertaining the crowd in the courtyard before the show. Photo by Karen Salkin.

It was lovely to see that so many local magicians came out to support their fellow prestidigitators, even though they must be familiar with a big percentage of each other’s tricks. (Actually, were they really there? Or was it all just an illusion?)

Speaking of strange occurrences, especially in looks-conscious LA, here’s some more good news–you can go to Magic Monday wearing anything at all! Let me put it this way—members of FarmersOnly.com would be comfortable there!

So, all in all, this is a perfect Monday night activity. When I was a club promotor a few years back, my posse and I didn’t know what to do with ourselves on Monday nights. All the dance clubs were closed! And even for the classier among us, there were no shows playing around town, either. We would have loved to dress down, and go have some laughs and dropped jaws at a show such as this one.

So, Angelenos should consider themselves lucky that they have this opportunity now! Go take advantage of it. (And don’t try to figure out how they all do it! You’ll give yourself a mental hernia!)