As I’m sure everyone knows by now, I’m a major figure skating fan. And I love cartoons, too. So, what’s more perfect for someone like me, and children of all ages, than Disney On Ice? Shamefully, though, I hadn’t been to a show for about four years, the last time being when my adorable friend Ayumi skated in one in San Diego. 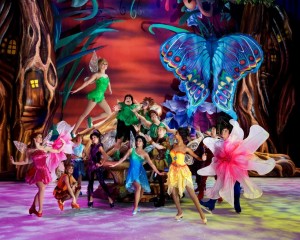 Well, she’s back in this year’s Worlds of Fantasy tour in Southern California, so I rushed to see it at Staples Center here in Los Angeles, before it starts it’s way down the state. (Trust me–I’m tempted to follow them!)

This is a brand-new production consisting of numbers from four of their movies. I had actually seen only the ones from The Little Mermaid before, but their Under The Sea classic is a showstopper.

As always, the show opens with greetings from Mickey and Minnie and their friends, but this time, it goes into a very clever number based on Disney’s Pixar film, Cars. It was good to see something geared towards the boys in the crowd. All the kids actually went wild for it! Including me.

Then the standard Disney fun began. After the super-colorful Little Mermaid section, we were treated to excerpts from The Lion King, ending with the spectacular Circle Of Life. The effects and costumes seem to get more creative each go-round!

My favorite Disney character of all time is Tinker Bell. (I know, I know–I’m more Peter Pan myself, but in the Disney film, I’ve always been fascinated with Tinker Bell. My pals who know me really well still give me gifts of anything with her on it. Or maybe that’s because I’m just a tad temperamental, like Tink, when it comes to my man.)

The entire second act is the story of how she came to be a tinker fairy, which I seriously never even knew about! It must be told on one of those straight-to-DVD releases. I was so thrilled to be treated to a story that’s new to me, as well as the telling-of-it on skates! And it was absolutely breathtaking! All audience chatting seemed to stop for this colorful rendition, except for “ooohs’ and “aahs.” Everyone was enthralled.

It’s the perfect ending to yet another Disney On Ice extravaganza! I highly recommend it, and can’t wait for the next one. Or maybe even this show again in Long Beach! Hope to see you all there.