BALLROOM WITH A TWIST

Back in my hip-hop dance club promoting days, I’d get home late at night and couldn’t sleep because my head would be spinning from all the excitement of the evening. It was actually a really fun feeling. I had not experienced anything like it since I left the clubs behind until I attended opening of night of Ballroom With A Twist at the El Portal Theatre in the valley last week.

The show was amazing! I was up all night just analyzing what had taken place in front of my very own eyes. Seeing these dancers perform on TV shows like Dancing With The Stars (aka DWTS) and So You Think You Can Dance (aka SYTYCD) is one thing, but to witness their magnificence up-close and personal is quite another. It’s unbelievable that some people have this kind of talent, not to mention the dedication it must have taken their whole lives to achieve this level of performance. (Being a former dance, I know what it’s like. Even though I loved dancing, I was too lazy to even change for class sometimes! That these dancers stuck with it through everything they must have gone through is amazing.)

All show photos by Alexander's Photography.

I feel safe in recommending this show to everyone–fans of dance, fans of the aforementioned television shows, fans of beautiful bodies, and those of colorful costumes, personality, and excellent vocals, as well. (More on all those aspects in a bit.)

We in Los Angeles are so lucky to be able to see these people perform in person; the rest of America only wishes it could, and I really feel that we should all take advantage of wonderful opportunities such as this.

Louis van Amstel, a popular pro on DWTS, conceived and choreographed this dance spectacular. It’s more than just ballroom, although that would be exciting enough on its own. There’s also hip-hop, contemporary, and amazing break-dancing courtesy of one of my SYTYCD favorites, Gev Manoukian. And the show just moves right along from one special number to the next.

For fans of Dancing With The Stars, we get the added treat of seeing both married couple pros Edyta Sliwinska and Alec Mazo, and Anna Trebunskaya and Jonathan Roberts. I always love seeing real-life couples dance with each other. I was shocked to see that Alec is so much taller than Edyta, (the girl with the body that I’m most jealous of,) even with her heels on! On TV, that doesn’t read at all. Their Spanish number in the second half was the highlight of the night for me. So intense. It was like what Mr. X and I go through on a daily basis, only we’re not dancing.

And on a serious note, I must say this about dancers in general. Mr. X and I are always upset that they get the short end of the stick when it comes to fame. The most goes into their professions of all the talent disciplines, and it’s just so hard to become famous from it. Mediocre singers get fame, many awful actors do, as well, and dancers rarely do. It’s a travesty.

But the funny thing is that the pro dancers on DWTS are so much more famous than most of their “celebrity” partners!!! We all call the pros by first name, (Maks, Derek, Cheryl, etc.) and everyone knows who we mean. For the supposed stars, we have to identify them as “the skateboarder,” “the chef dude,” “the old guy,” “the annoying nasal chick,” etc. None of us even know who half of them are! (And that’s a kind estimate.) Yet, the pros are treated like extras while people we don’t know, who just have good managers and publicity people, get called “stars.” Show business is just not a fair game.

So back to the truly talented cast of Ballroom With A Twist. When I first saw Gev, (who had just accepted the gig, so, unfortunately, he was not listed in the opening night program,) I gasped because that was such a special surprise to me. I spent a good amount chatting with him at the after-party, and he was just adorable and as down to earth as he seemed on SYTYCD. Always lovely to see a talented person who’s lovely, to boot. The numbers he performed with his SYTYCD co-horts, Randi Lynn Evans and Jonathan Platero, were among the best on the El Portal stage.

As an added treat, the “host” that night was comedian Niecy Nash, who was Louis’ celeb partner on DWTS a few seasons ago. (I think she’s rotating with Jane Seymour, so, if that’s really important to you, please check with the theatre to see which nights are which.) Her interactions with Louis were a fun little respite in-between the serious dances.

Another special attraction, (hence the “with a twist” portion of the show’s title, I’m assuming,) is that there are also two live singers who had been Top 12 contestants on American Idol. (Boy, without television talent shows, there would be no BWAT, I guess.) David Hernandez had been one of my favorites the season he was voted off way too early, so I was thrilled that I got to hear his wonderful voice in person. What an added treat.

I also loved seeing the colorful, sparkling costumes. And that was just on the guys! (Ba-dum-bum.) Seriously, I haven’t seen so many sequins since my old wardrobe. I’m not joking about that–once, when my parents were visiting me several years ago, my father opened my closet by accident, instead of the coat closet. He exclaimed, “What are those? Costumes???” No–they were just my regular party dresses. What can I say? I’m a glamour girl.

And don’t even think of slipping out of the show early (not that anyone ever would–I saw people there till the end who leave every other show at intermission)–the last ten or fifteen minutes are like a fireworks display–it’s bam, bam, bam of excitement! One thing immediately after the other. And, I won’t spoil the second half little surprise, but Louis really knows how to get the crowd’s energy level up at just the right moment. That’s all I’ll say. 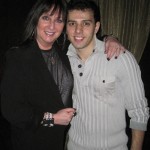 I also must really laud the El Portal Theatre itself. It’s very near and dear to my heart because this is the place where I first met Adam Lambert five years ago!!! I think you all know how special to me that makes it! But other than that, every seat is a good one, the lobby is the perfect meeting place at all times, and even the bathrooms are good. (Well, the ladies room is–I don’t know the men’s room particulars.) Also, the NoHo Arts District that it’s a part of is always interesting. 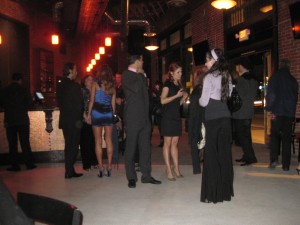 Not the best photo I've ever snapped, but that's Edyta in the blue dress, holding hands with her handsome hubby, Alec, and Jonathan and Anna in the foreground.

After the show, we all went across the side street to party at the not-even-yet-opened Federal restaurant and bar. What a great party space it is! Their mac and cheese balls were so delicious that I sat in the big front room to eat them first before I even ventured into the more happening back room to mingle. (I’ll try to do a real review of it sometime soon, when it officially opens, of course.)

A more fun night I cannot imagine. I rarely see shows twice, but I hope to repeat this evening before the end of their run.