Trending
You are at:Home»LISTS»LIST: THINGS I'M SHOCKED PEOPLE DON'T HAVE IN THEIR HOUSES
By Karen Salkin on June 5, 2013 · LISTS

THINGS I’M SHOCKED PEOPLE DON’T HAVE IN THEIR HOUSES

As you know, I recently got back from a month and a half in New York. I was in more people’s abodes there than I usual am in Los Angeles. And, since I sometimes stayed elsewhere than my own Brooklyn crib, I was at the mercy of others on the occasions that I forgot to bring an item I consider a necessity. (And vice versa for my overnight guests!) 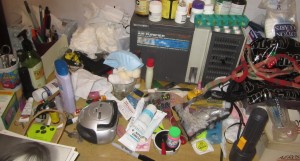 Some necessities of life!

The whole process got me thinking of some of the things I can’t believe that people don’t have in their houses, items I absolutely could not live without on close to a daily basis. Some I discovered on my trip, and some I’ve noticed in L.A.

Either way, I’d love to know if I’m alone in my requirements, so please feel free to tell me what you need to use frequently in your own happy home.

Here’s my list of things I’m shocked that people don’t have in their houses. Most are self-explanatory, but I included a few personal stories:

Dish towels—I used to stay at a house for a few weeks a year, and couldn’t believe they had no dishtowels, especially with a rambunctious child around. I offered to buy them some, but the mom told me that she thinks they’re nasty to have around after one use. I can actually see that point. But we had to use more paper towels than is fair to the earth.

Sugar—A pal thinks sugar is bad for us, so she has only the fake packets in her house—you know the stuff that is really bad for us!

Honey—The same friend has no honey, either. This one I can actually understand a house being without, if they don’t drink tea ever. (And don’t have guests who do!) But, being a natural antibiotic, it really does come in handy in so many ways that I could not live without it!

Pot holders—I don’t even cook, yet I have multiple pot holders in both my houses!!! You need them when things come out of the microwave, for goodness sake! And to place hot plates on, for personal use, and as emergency trivets!

QTips—Okay, please explain to me how some of you don’t have at least the cheap-o cotton swabs in your house! Don’t any of you groom??? I use them in multiple ways: for grooming, cuts, cleaning tiny household areas, for make-up emergencies—you name it. They’re the handiest things, yet few people I know, know that! Did they grow up in barns? And are none of them girls who need to remove eye make-up?

Cotton balls/pads—On the same tip, how does one get through a day without balls or pads of even fake cotton??? Even Mr. X finds uses for them. And when Clarence was alive, forget about it! Does everyone else leave that creepy crust by their dog’s eyes? And what about their own? Ugh.

Shower caps—I’m not talking about these for guests because the inside of the plastic touches one’s hair, and that’s not something anyone wants to share. But they don’t even have them for themselves! Does everyone wash their hair every day? I can understand for men and females with short hair. But hair techs always tell us to wait at least two days in-between, and boy, are they correct! I used to wash mine every day, until it looked awful, and then a new hair person made me wait a few days, and it came back looking great. And what did I use to shower on those non-hair-washing days? A shower cap, of course!!! (And guess what? I always have unopened ones for guests, just in case.)

Napkins—No lie. I’ve been to many a house where there’s nary a napkin to be found! This one I can’t fathom. I did inherit napkin-obsession from my parents, but we always went to many eateries where we took too many and didn’t want to throw them out. And they always come in handy. But, a giant pack of napkins is so inexpensive that I can’t imagine anyone eschewing them for home use!

Wash cloths—How do people wash their faces without using a washcloth to take off the cleanser? There must be a lot of people running around with really dirty faces!

Ice!—No fooling. Mr. X and I were at a party late last year, where, of course, soda was being served. I asked where the ice was, and the wife answered, “We don’t have any.” I can understand people not buying extra bags for their soiree, but what about just the cubes in the freezer, for daily use? They didn’t have those, either. On the way home, Mr. X commented, “They must be really healthy.” I asked why he thought that, and he answered, “Because they have no ice! They must not get any injuries.” We’re still scratching our heads over that one!

Pens!!!–This final story is one of my favorites. When Mr. X would leave town to work or see his family, I was always too scared to sleep home alone, so I stayed with different pals. One night, I stayed in the gorgeous, pristine, all-white house of my friend, D, one of the best-looking, best-dressed guys ever! Classy, as well. (I had met him shopping in Tiffany’s, and he was so immaculate-looking that I mistook him for a sales guy there! He was a fan of my show, and we became fast friends.)

The next morning, D went to work, and I stayed in my room, luxuriating in the cleanliness. I checked my machine (remember—it was the olden days,) and there was a message from a network that they needed to see me right away! I knew the message would delete when I hung-up (see previous aside,) and I had paper, but no pen. Frantically, I ran around his house looking for one, to no avail. Had I been in my own house, I would have had my choice of hundreds of them in a nano-second!

When he called later, I told him who had called me, but that I missed the gig because I couldn’t find a pen. He answered, “Oh, I have it with me.” I asked, “You have what with you?” And he said the famous words I always quote, “The pen.” The pen??? Shocked, I then asked, “You have only one pen???” To which he queried back, “How many do I need?” Mr. X sure wishes some of this guy’s philosophies had rubbed off on me!

Okay, that’s it for now. I’m sure more will come to me soon, and I’ll be happy to pass them on. But right now, I have to run out and get extra supplies to carry around with me!