Trending
You are at:Home»LISTS»LIST: SEVEN MOST IMPORTANT NEEDS ON A DESERT ISLAND
By Karen Salkin on August 10, 2012 · LISTS

SEVEN MOST IMPORTANT NEEDS ON A DESERT ISLAND

A reader suggested this next list, and it took me awhile to narrow down the items. But here it finally is, in no particular order: 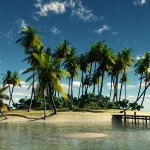 Eyelash curler (I know many say mascara, but a curler doesn’t run out of product and can be just as effective, especially if you have no other make-up)

Earrings (Perhaps the most important because I think no female face can looks its best without them!)

The funny thing is that I’ve had this conversation, in different variations, several times before over the years. When I had this fun group of guy friends, during my recent clubbing days, we had many discussions of what person, not item, you’d want with you on a desert island. My best friend among them (whom we’ll call N) said he’d, of course, choose me, unless they had a basketball hoop and ball; in that case, he’d need a guy for more athletic competition. (I guess he never saw my jump shot!) His closest guy pal, (whom we’ll call B,) who resented my ascension to N’s bestie, thought it was a contest between himself and me, and that he would beat me out in N’s affections. When I pointed out to B that N said he’d choose me, B said, “Of course he’d choose you! He knows that you’re the only one who’s smart enough to figure out how to get off the island!” Touché. But let’s hope it never comes to that, with or without the seven items listed.

Thanks to the reader for the idea for this column! [Note: when you guys make suggestions, please let me now if you want the credit for coming up with the concept. Otherwise, you’ll stay anonymous, like this guy did, though I want to thank him in print.]