Trending
You are at:Home»KAREN'S THOUGHTS»KAREN’S THOUGHTS: THE DEPRESSING, IN EVERY WAY, SECOND IMPEACHMENT TRIAL
By Karen Salkin on February 16, 2021 · KAREN'S THOUGHTS

THE DEPRESSING, IN EVERY WAY, SECOND IMPEACHMENT TRIAL

Yesterday was President’s Day, which makes Orange Hitler being found not guilty this past week-end of the charge of inciting the January 6th Capitol insurrection even more stinging than it already was in real time. 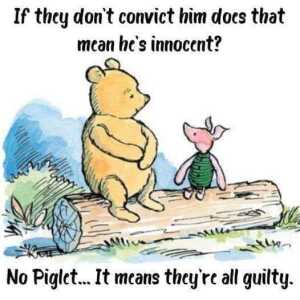 But before I discuss the recent shame that the forty-three Republicans (who voted “not guilty) brought upon this country, I first have to explain the term “impeachment” to some of you…again. (I’m amazed that so many people have no idea what the concept is! But I’m not at all surprised that the nescients use the term without the knowledge of its definition!) The act of impeachment is “to charge (a public official) before a competent tribunal with misconduct in office.” So Orange Hitler had already been impeached before this trial! What took place last week was the trial to decide whether to convict him of that charge!!!

If you missed the almost-all-week trial, you can see the highlights and/or read the transcripts elsewhere. My purpose here is to give you some of my thoughts that I was able to make notes of in the middle of my admiration for the House Managers, who laid-out the case brilliantly, and my utter disgust for the hapless defense team, the likes of whose lack of brain power I’ve rarely seen in people who have actually earned law degrees.

Even though these past five years have turned me into a political being, I really didn’t want to write about this. My blood boiled enough watching the proceedings. But, as an American, I feel compelled to weigh-in. 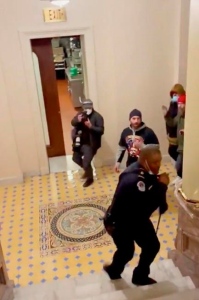 Officer Eugene Goodman bravely leading the insurrectionists away from the where the good people were.

I’m glad the American people got to see all this evidence. But the idiot Orange Hitler supporters still won’t get it. (But the insurrectionists who’ve been charged for their evil deeds of that day will use their leader’s incitement as their defense in court!)  It’s so maddening to share the country with people like that.

But it is a positive, small as it is, that creepy Republican leader, Mitch McConnell, totally shredded Orange Hitler in his post-vote speech, admitting in no uncertain terms that the former President is, indeed, guilty of inciting the insurrection. But old Mitch should have said so with a “guilty” vote when it counted!!!

The absolute most clear thing that came out of watching the entire impeachment trial is that the difference in intelligence between the House Managers and the defense team was stunning.

Here are my other big take-aways:

Hearing those people speak reminded me what our leaders are supposed to sound like. They were all calm, and laid-out their case slowly, deliberately, and smartly. And they all have credentials as leaders; they are lawyers, service people, graduates of top universities, civic rights leaders, etc. I do usually get tired listening to any politicians, even Democrats, (outside of Hillary Clinton,) but this team had me from the get-go.

Even though I’ve always had only disdain for Orange Hitler, even before he ran for President of the United States, and I’ve always marveled at his supreme stupidity and elementary school actions, I wasn’t aware of much of his evilness that the many videos and audios and tweets demonstrated. I’m sickened by all of it, as I’m sure all normal people are.

The House Impeachment Managers were a team made-up of Congress people Jamie Raskin, Diana DeGette, Eric Swalwell, Joe Neguse, Stacey Plaskett, Madeleine Dean, California’s own Ted Lieu, and my two personal favorites, Texan Joaquin Castro, (I don’t remember ever liking anyone from his state before,) and David Cicilline from my beloved adopted state of Rhode Island. (I summered there forever when I was young, and lived there for two of my quartet of colleges, and I have to admit that I’ve actually rarely heard anyone from there speak so well!)

On the other hand, those defense team people are illiterate! They were so dumb that I was thinking that maybe Trump should have asked for a public defender!

I’ve seen only a handful of worse lawyers, one up-close and personal, with Rudy Giuliani being another one, of course. Castor and van der Veen showed themselves to be despicable and liars. They’ll be back ambulance-chasing right away.

After the vote, Chuck Shumer stated, “The senate was subject to a feeble and sometimes incomprehensible defense.” Exactly. And what’s really extra-maddening is that they most likely think he was not convicted because they did a great job, rather than the votes were already decided before all of this.

I had to finally write their ignorant, erroneous words in longhand because my computer kept correcting the misspellings I was trying to get down! Even the Closed Captioning had to pause on all these misspeaks of theirs, and then either leave the word out or correct them themselves!

Here are just some of their wrong words and mispronunciations that I had time to jot down:

…said “preferring” a case for prosecution, when he meant “proffering,” which he should know is often used in legalese.

…said “impliciBLy” instead of “impliciTly”

…said “prescribe” for “proscribe.” I guess he has a lot of trouble with words beginning with “pr.” 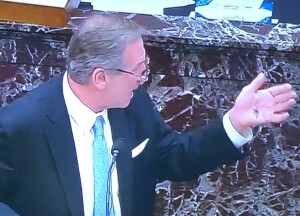 The van der Veen creep, with ink on his hand he was gesturing with. Was it crib notes? Or is he just a slob? Or both? (Or even, perhaps, a swastika? Who knows with these people.) Photo by Karen Salkin, off the TV screen.

…said “mal-ev-net” for “malevolent.” At that point, Mr. X laughed and marveled, “He’s mispronouncing everything!!!” I can’t even figure out how to spell these malaprops!

…said “incinderary” for “incendiary.” What a moron! Did he go to law school on-line?!

…said “anominous” for “anonymous.” And he said that one while reading his notes with his fingers, like he was in kindergarten!

…said a date was “wong” meaning “wrong,” of course. He didn’t even correct himself, which leads me to believe that he doesn’t even know the right words.

…said “spectaBle” for “spectaCle.” And that was the only one he corrected himself on.

…couldn’t even read his own notes!

…said the fear Trump might run again is “what’s driving this impeachment.” Well, duh! That’s of course what we’re all worried about—that Hitler will have more opportunities to rile-up his imbeciles again in the future!

…said “this dark path of anminity“–I have no idea what word he meant for that non-word.

…ended by telling the Senators to “work on things for all of us in America,” while looking up and pointing to the camera, which he thought was so dramatic. He made me almost vomit!

THE ONE GOOD THING THAT HAPPENED THERE LAST WEEK

The one thing that brought happy tears to my eyes, (as opposed to all the very sad ones I shed while watching the manager’s footage of the evil insurrection,) is that the Senate voted unanimously to award the Congressional Gold Medal to Capitol Police Officer Eugene Goodman, for his incredible bravery and brilliance in leading the crazed mob away from the Senate chamber that day. Without his courageous and ingenious act, at least some Senators would have surely been injured, if not worse, by the lunatics. The medal is the highest civilian honor that can be bestowed by Congress.

So I’ll leave it there, on the one high note*. And pray that no one else will ever need to receive that honor for a reason such as this one. *[Officer Goodman received a full-house standing ovation that day, except for a-hole Republican Senator Rand Paul, who finally did so very reluctantly and refused to applaud the man! What a waste of humanity he is!]

Now, America, I beg of us to move onward and upward and never elect reprobates like Orange Hitler ever again.