Trending
You are at:Home»KAREN'S THOUGHTS»KAREN’S THOUGHTS: ISOLATION UPDATES (AKA: STOP BEING BORED!) (WITH A NEW VIDEO LINK!)
By Karen Salkin on March 20, 2020 · KAREN'S THOUGHTS

ISOLATION UPDATES (AKA: STOP BEING BORED!)

Well, this past Wednesday at 10PM, it became a full week of self-isolation for me. And it will continue until they tell us that we can all go out again. I always listen to the people who know more than I do! [Note: Just last night, LA County issued a “Safer At Home” order, which may keep us in our houses for another month!] [The photo above is of the now-empty Santa Monica Pier, which is what all of Los Angeles looks like these days. It’s, heartbreakingly, become something of a ghost town!] 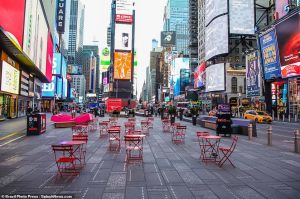 And an equally-eerie empty Times Square in NYC.

I’m glad that it’s rained in Los Angeles for most of that time. It’s so much easier to be sequestered when the weather makes you not want to go out in it, anyway.

The weird thing is, because I write from home, I’ve occasionally spent a week in the house before. It was both harder and easier this time. Harder because I was aware the entire time that I basically had no choice, as we should all realize about life right now. And easier because I knew I wasn’t missing anything—the entire world has been cancelled! 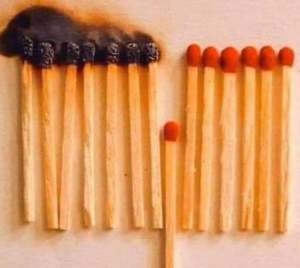 This should explain why we must self-isolate these days. (To the intelligent people, at least.) It’s titled “The One Who Stayed Away Saved All The Rest.” Brilliant!

I have a few foolish pals who think that this stay-at-home situation doesn’t apply to them! How selfish. The way I see it, unless you absolutely have to leave the house (because you’re a doctor, nurse, scientist, garbage man, policeman, bus driver, etc., or you have to go to a doctor, or need food that you couldn’t get the previous time you were out,) we all need to stay put. Dot, dash, end of story.

But I’m grateful every day for what we do have. Since Mr. X and I are in creative professions, it’s not a major hardship for us to not be working steadily, as it is for sooo many people worldwide right now. We will get by for awhile, as many others in my orb will, as well. But I’m beside myself with worry about all others who are not in our positions. I just hope that it will all balance-out in the end. (And meanwhile, our planet is healing a bit, without so much pollution from the world working the way it has been until now. So that’s one bright side to look on.) 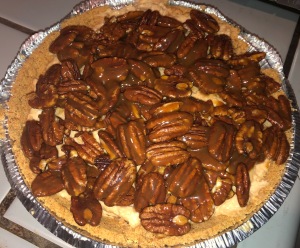 Here’s a Pecan Pie Cheesecake I whipped-up for Mr. X a few months ago. I feel another one coming on during this siege! Photo by Karen Salkin.

On the self-isolation front, eating well would have definitely been an issue for Mr. X and me just four and a half years ago. I’ve never been a cook, (why do you think I became a restaurant critic?,) and my early attempts in the kitchen were just short of disastrous. But after my mini-stroke in 2015, I had to learn how to cook a few healthful dishes in order to live, and, knock on wood, they are all delicious, so I’ve been happily feeding us on those during this siege. (If you’re curious, just check-out the Recipes section of this e-zine; it’s under the bigger heading Food on my Home Page.)

In all these years, I’ve rarely looked at Facebook, (outside of my Fan Page, listed as It’s Not About Me TV, in case you’d like to follow me now,) because there’s just not enough time in life. But, since we’re all been forced to slow down, I’ve checked-out a few posts of others recently, and I’m shocked by how bored everyone says he or she is! Come on, people—get a grip! Even with being stuck inside for every second for over a week now, there still are not enough hours in the day for everything I want, or need, to do in the house! And I’m not even talking about leisure activities. I need to clean-out closets and the refrigerator, organize my cutlery drawer, clean-up the clutter I’ve accrued in all three bedrooms and two bathrooms, and sooooo much more housework that’s gone by the wayside while I live my glamorous bon vivette life! 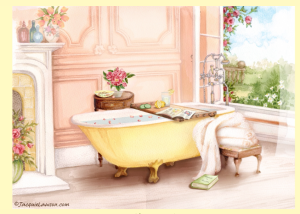 Part of one of the stunning Jacquie Lawson cards! A lovely way to stay connected with your peeps would be to get a subscription to her site, and send-out cards like this one whenever you feel a bit down. I’m getting relaxed just looking at this mouthwatering image!

If I want to relax, I’d be absolutely content to watch old movies on TV 24/7! And I’m in desperate need of exercise, even with my broken back. My house is small, but there’s always just dancing around the living room that can be done.

And, in the self-pampering category, there’s a bubble bath with my name on it, mani/pedis to perform, (yes, I’ve always done my own—it’s so much safer and less time-consuming than going to a salon,) and skin masks to don.

I promised myself that I’d chat by phone with one friend a day, because I never have time for non-in-person socializing, but I haven’t even had time for that yet! [Note: At this point, I’ve talked with only a quartet of pals so far, and I must say that three out of the four convos were all somewhat disappointing, with them being people who think they can still go out when they want to. It made me want to go back to not chatting with anyone but Mr. X for the duration.]

I also haven’t had time to read even one of the books and magazines I’ve stockpiled throughout the years. And I adore card and board games, but Mr. X and I haven’t gotten around to any of those yet, either. 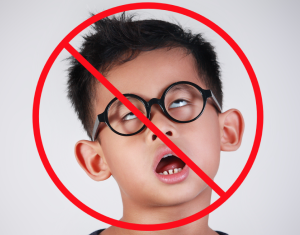 Stop thinking that you’re bored! (Thanks to Noelle Hannibal for the red circle help!)

But we did work on flooring for the deck together, which was actually fun. In my life prior to last week, I was going out about five nights a week, while Mr. X hates going to events, so we’ve never gotten to spend so much time together as we are now! We’re half having fun and half at each others’ throats. So, it’s business as usual for us.

All the above is to say that I can’t imagine being bored in my own house. But in case you are, you can always follow my examples that I just laid-out. Or just catch-up on all my previous YouTube videos and INAM columns.

And if all that is not enough, here’s my latest YouTube video, of my attempt at doing a scientific experiment. And it’s on make-up, so it’s doubly interesting. Here’s the link: www.youtube.com/watch?v=PlVfTcHChHg&t=4s. 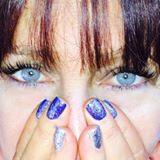 Karen Salkin’s eyes when she wears a surgical mask. Photo by Mr. X.

Lastly, I beg all of you to take this coronavirus situation seriously! Please do as asked. I have friends who think it’s okay to go to the store on multiple days, which it is not. For goodness sake, people—just get everything you need for two weeks in one trip! Please stop endangering yourself and others! The rules apply to all of us, not just some! The next time I deign to put make-up on, I’ll do a video about that topic. It’s a quick funny story, but I’m enjoying my in-the-house pallor too much to record it now.

So just enjoy my experiment vid, and I’ll do the other one soon, maybe even in a mask! But, of course, I’ll make it a blue one to match my eyes. And hey ladies—all mask-wearers are saving on lipstick! So there’s that. 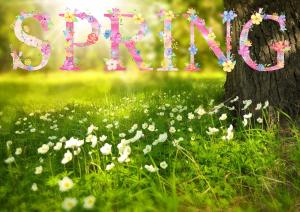 And, oh yeah—Happy Spring today!!! Only two more seasons to go after this, until we can put 2020 behind us!

It’s also the International Day of Happiness—boy, did those organizers miss the mark!