OMG! I have so many columns ready to post, on interesting topics, (like food, gifting suites, book reviews, Adam Lambert, etc.) but this one has just got to go first. I just finished watching slimy Tiger Woods’ five minute interview on ESPN, and all I can say is he’s lucky that I’m not the one who did the interview! Let’s just put it this way–he’d be wearing a new pair of earrings. (That look suspiciously like his family jewels, if you know what I mean.) [Note to internet police: That’s just humor, not a threat. I’m a comedian.] 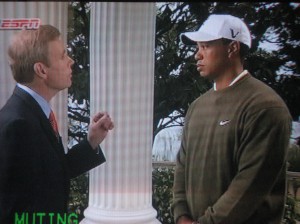 Tiger’s unbelievable, and not in a good way. He said the hardest part of the ordeal was talking to his wife and mother because “I hurt them the most.” REALLY??????? You think??????? (He also said, “It was all me. I’m the one who did it. I’m the one who acted the way I acted. No one knew what was going on when it was going on.” Wow. Who else did we think it was who was cheating on his wife??? What an idiot. I really just have to shake my head over this statement.)

Outside of his kids, who are too young to even know what’s going on, just whom else did he hurt? It’s actually none of our business. He didn’t hurt me–did he hurt you? Sandra Bullock’s straying husband has “hurt” me more because I’ve actually had nightmares over her situation. (Seriously, that one’s making me sick because she’s made such a fuss over him “having her back” in recent months, so she looks like a fool. A fool in love, but a fool nonetheless, for trusting him.)

But I digress. I guess I just can’t separate all these famous cheaters! So, back to Tiger. There are two parts to what this latest interview brings up. The first is that it’s all none of our business. The only honest answers he gave, in fact, were the ones where he said, “That’s between Elin and me.” (I’m sure he said “Elin and myself,” because he’s no brainiac, either.) If he did, indeed, “disappoint” anyone other his family (and I just might concede his sponsors, as well,) that’s on them. Perhaps there are fans who held Tiger to be more than he is, but that’s their faults for building up a stranger. (But if Roger Federer ever lets me down, bite my tongue, that’ll be a different story. I refer to Roger as “the stranger I love most in the world.”)

The second part is just the pure creepiness of the man and what he has to say. Now, not only is he a lying, cheating dirtbag, (my favorite word, “douchebag,” is actually too good for him,) but he got heavy and is rocking a pot belly. If having slept with many people who look like STD breeders wasn’t enough to keep his poor wife away from him, maybe looking at his new physique might do the trick. (Okay, even I know I’m just getting carried away now. But that’s how much I can’t stand the guy.)

Let me get back on track here. In this most insincere of interviews, Tiger invoked the words “treatment” and “amends” so many times, I felt they were his new sponsors! Or maybe he was trying-out to be a character on Sesame Street (is that even still on?) and knew that repetition is the way to teach vocabulary. I really do think that he believes that people will like him again if he points out that he has a “problem,” rather than owning up to that he just cheated on wife. With just about everyone he met! Ugh.

Okay, I have to go take a shower after seeing that ESPN piece. But to sum up: Tiger is creepy, but it’s none of our business, and he owes no one an apology except his family. If his wife chooses to stay with him, I can no longer feel sorry for her. She’s not some poor girl with no money and no one to turn to, who’s stuck in a bad relationship. She has friends, family, looks, relative youth, and money. At the very least, she can get a house with Sandra Bullock. Now that’d be one reality show I just might watch!