Two local Los Angeles high school football teams played each other in a crazy game on Friday, October 29, with the second worst and lop-sided score in the history of high school athletics. Or of any sports, actually.

Inglewood High beat Morningside High with the final score being 106-0! Wow. Just wow. [Note: In case you’re curious as to what exactly the highest high school score of all time is, that would be the 256-0 rung-up by Kansas’ Haven High School over Sylvia High School…in 1927! Double wow.] 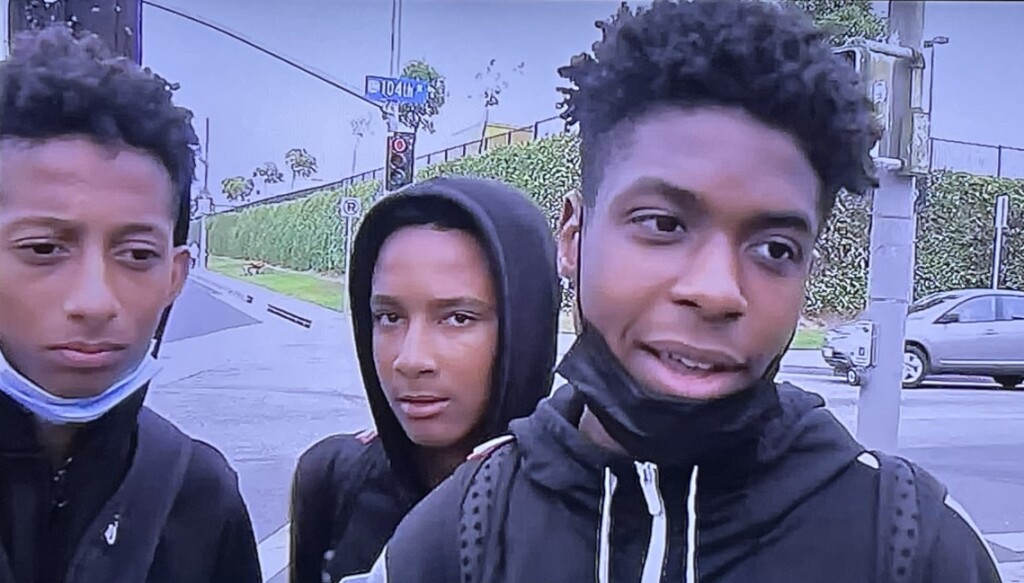 The very gracious “losers” from the Morningside team, Dayvon Scruggs and company. Photo by Karen Salkin, off the TV, (as is the one at the top of this article.)

And then the controversy began. Most people, (Mr. X and me included) feel that the Inglewood team was classless to continue scoring, which I think we can all agree was totally unnecessary after let’s say seven touchdowns with no reciprocal scoring from Morningside. On top of that, the victors made the most unsportsmanlike decision to go for the absolute most unnecessary two-point conversion in football history when they were already at 104-0. Enough already.

I don’t know if high school football has a “mercy rule,” but if they do, someone on the field should have invoked it. I totally blame the Inglewood grown-ups for this complete absence of respect. Coaches should teach their players how to be good sports, and even better people, along with imparting how to play the game itself.

Many others are putting the onus on young Inglewood quarterback Justyn Martin for throwing thirteen touchdown passes, instead of just laying off after his team was up about 49-0. Martin had recently committed to play at UCLA, my old stomping grounds, (both in going there and then being friendly with all the sports teams years later,) and I’m just praying they teach him better at that institution! And how stupid and selfish of the Inglewood coaches to keep him in this game when totally unnecessary; it’s rude to UCLA and Justyn himself to have risked an injury when he was definitely not needed anymore! 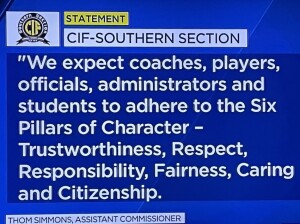 Photo by Karen Salkin, off the TV.

The whole debacle showed an incredible amount of bad sportsmanship on the part of the Inglewood football powers-that-be. The principal of Inglewood did issue a sincere and very embarrassed apology on the Monday following the game. But the coach, Mil’Von James, should be fired! He should not be allowed to do anything with young people after that total lack of judgement. Or kindness. Or good sense. Or…anything that young people should ever emulate!

To their credit, the California Interscholastic Federation Southern Section condemned Inglewood’s in-game conduct in a statement, saying, “We expect coaches, players, officials, administrators and students to adhere to the Six Pillars of Character–Trustworthiness, Respect, Responsibility, Fairness, Caring and Citizenship. A score of 106-0 does not represent these ideals. The CIF-SS condemns, in the strongest terms, results such as these. It is our expectation that the Inglewood administration will work towards putting in place an action plan so that an event such as this does not repeat itself.” 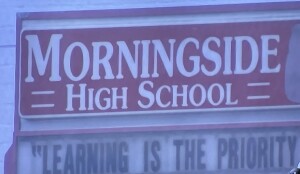 A lesson the OTHER high school could use right now! Photo by Karen Salkin, off the TV.

Most importantly, in the final analysis, as Mr. X pointed-out to me when we watched some members of the Morningside team speak impromptuly to a TV crew a few days later, the losing team came out the winners in all of this. That’s because, as the Inglewood team was classless enough to continue to score, the “losers” showed their class with their words. Dayvon Scruggs, the teen with the most to say, explained simply, “The media is making it more terrible than it has to be. A game is a game. We lost. There’s nothing there.” He added, “[The Inglewood coach] used their star quarterback, so it was to be expected. We came in the game knowing that we were going to lose, but at the same time we still fought to the very end and didn’t quit and that’s what really matters.” And that makes them the winners in our book.