Trending
You are at:Home»KAREN'S RANTS»KAREN’S RANTS: STOP THINKING YOU ARE NOT PLUS SIZE!
By Karen Salkin on April 29, 2016 · KAREN'S RANTS

STOP THINKING YOU ARE NOT PLUS SIZE!

I’m sure this column will piss some people off, but it needs to be said. (I do feel a bit bad being the one to do it, though, but someone has to.) This situation is two-fold. First is that heavy people need to stop declaring that they are not plus-size. (That means you, Amy Schumer! More on her in a second.) 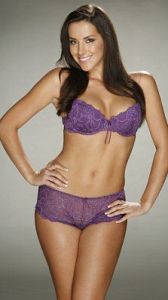 This girl is listed as a size 10! She looks thinner than that to me, but I’m using it to show you that Amy Schumer thinks that she’s two sizes smaller than this girl! Took about denial.

And second, please, everyone, stop saying that women should not be classified! Everyone is classified! That’s part of how we identify people, as to the cops. It seems to be always heavy women who are saying that females should not be categorized as “plus-size.” They’re just delusional if they don’t realize that’s what they are. Just because you don’t want to admit it doesn’t mean people don’t notice.

There’s nothing rude about the term “plus-size.” It was coined as the politically correct term for “fat,” to make chubsters (as I recently was, so I can say all this) feel better about themselves. 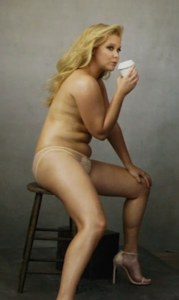 Amy Schumer, who claims to be a size 6! I really thought she did this shoot to proclaim that she doesn’t care that she has those rolls, but, instead, it turns-out that she thinks she’s thin! Oysh.

If Miss Piggy doppelgänger (but without the charm) Amy Shumer doesn’t know that she’s fat, she’s less bright than I originally thought. That woman is not a size 6, as she claims she is! Trust me. If she’s a 6, I’m a negative 8! [Note: I really don’t know anything else about her, but the fuss she made about being included with other “plus-size” women in a magazine recently inspired me to write this column.]

I was fat for a few recent years, after I broke my back and couldn’t exercise anymore. And I admitted I was fat. There’s no shame in admitting you’re fat, only in being fat! I didn’t think I had a cloak of invisibility around me, as Amy Shumer thinks she does, obviously.

This is what a size 6 looks like. I know because that’s me, Karen Salkin! Not the best pic of me, because I was dancing on my show, but the only one I could find to use right now.

I may not have realized just how fat I was, because we don’t truly see ourselves as others do, but I could see the general view. [Sidebar for a funny story, that I love telling: I had been pals with my now great friend, Alice, for only a few months two years ago, but we were inseparable during that time. We both had long, dark hair, and shared a passion for clothing and jewelry. And we always complimented each other on our appearance. She’s a tiny little thing, and always looks great. One day, we were trying on clothing in a store, and when I saw myself in leggings, I almost passed-out. I exclaimed, “I didn’t know I was this fat!” And, without skipping a beat, and totally seriously, she asked, “Don’t you have any mirrors in your house?” Once I realized what she had said, I could not stop laughing. It was so funny! But it also made me realize that I had gained so much more weight than I had thought, which was good to know.]

So, I knew I was heavy, but I just didn’t realize that I could change it, without the ability to exercise anymore. But, as I’ve learned in the past six months, we can all change that situation for ourselves. It takes a lot of concentration and willpower, but I promise you that it can be done. And it’s really not that hard to do. If I, a formally-non-cooking-and-shopping dessert-lover can do it, everyone can!

Let me leave those people who are plus-size, but don’t want to be seen as it, these final words of wisdom—mix in a salad occasionally. You’ll be glad you did.