I recently received a comment from a reader stating that he “used to come to this site every week to get” my “views on the competition shows. They were very funny and insightful,” and he said that he felt that I was getting away from that. I have to assure those of you feel the same way–I’m not; I just have to give all my topics equal time. But, I promise you, when there’s something juicy on TV to critique, such as this latest Miss USA competition, I’ll do my best to get it on the site in a timely fashion.

Actually, this is not so much a review of the actual pageant as it is of the telecast in general, and the awful hosting and commentary. Although, I do throw in a few bon mots about the really dim-witted four finalists. They were straight out of a Christopher Guest movie.

This contest always has the best-looking girls around, mainly because that’s all that they ask of them– there’s no talent portion, and they need no platform to run on nor basic intelligence. 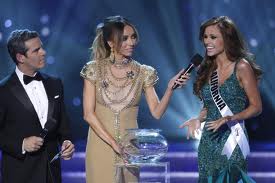 The hosts grilling the future winner.

Okay, so here are the players I refer to, followed by my mostly-in-order notes that I took as the evening wore on: the hosts were someone named Andy Cohen and the woman from E with the big forehead, who seems nice, but is just awful. I don’t know her name and quite frankly don’t want to spend even one second trying to research it, so I’ll just call her “E Woman. ” The “expert analysts,” (or some title like that,) are Kelly Osborne and former winner, Susie Castillo.

First up, my thoughts on this Andy Cohen, whom, shockingly, (now that I’ve researched him and seen just how much television he’s involved in,) I had never heard of before. I thought he was doing a bit at first. His character seemed like the son of Martin Short’s Jiminy Glick and any of the ones that Chris Parnell has trademarked. I could absolutely not believe that he was a real person acting like that! (That’s not necessarily a derogatory comment—people always tell me that they thought I was doing a character on my show, too, until they meet me and realize I’m the real McCoy.) He was just not host material, though, judging by his resume that I now know of, he’s had a lot of gigs doing just that, so he must be a super-smart cookie, which just didn’t come across on this show.

Now, to the rest of the night, basically in order:

As they introduced themselves, why did just about every single contestant have puppet voices?  I couldn’t believe that they all talked like that! I thought I had tuned into SNL by mistake!

The E Woman said, “But we’re not the ones looking for attention tonight,” while she lifted the front of her dress, for longer than necessary to walk down the steps.

They began misusing “amazing” right off the bat.  I lost track of how many times they said it over the course of the show.  There was nothing “amazing” about the night except the fact that any of them have jobs in the public eye!!! 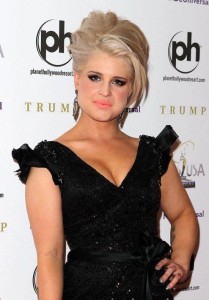 It's hard to see her tattoos in this photo, but I decided to be kind.

Who chose Kelly Osborne as a fashion expert???  No offense about this first observation, because I’m getting there myself, but she’s chubby, has a protruding jaw and usually bad hair, and both arms have hideous tattoos!  How about get someone who actually looks good themselves to tell us what others look like? (Okay, I’m doing the same thing right now, but no one hired me to tell the rest of you about it.)

Dreadful host pairing.  Neither is good-looking, and they’re both self-conscious and devoid of personality.  Bring back Donny and Marie. Or even Regis and Kathie Lee!

Utah’s passion is “manicures,” so I could have been a contender!

Note to Kelly Osborne: It’s not about you!!!   Every comment of hers, that I could even make-out with the way she often swallowed her words, was about herself!!!  It was way beyond what I do. And hers aren’t even amusing; i.e. “I would wear that dress,” “I can’t do that,” “I have a dog,” etc.

I hope this is okay to say, but I have to point it out—not one of the Top 16 was ethnic! There was not one black girl, nor any Asians, and just one semi-Latina.  (She was born in Cuba, but grew up in Florida. Where else?)  This is so not the make-up of the USA.

I guess that having a Muslim winner last year freaked-out the powers-that-be.

Speaking of her, she’s supposed to be Miss USA, but in her closing speech, she said she’s trying to help Muslim women.  Nice. (And Mr. X said her final outgoing get-up was “a vulgar dress.” He never says anything like that, so it must be the case.)

I hesitate to say this next one, but I’m sure many of you who saw the show thought it, too: Of course there were no black women chosen–there were three black dudes on the judging panel!  ‘Nuff said on that one.

Also, the judges were , for the most part, a bunch of lummoxes.  Dallas Maverick Tyson Chandler and celebrity chef Rocco DiSpirito were the only ones who had even a modicum of class.

I was actually surprised by how few fake boobs there were! I guess their handlers finally realize that that those big bosoms (as my mother calls them) look kind-of weird on those oh-so-skinny girls.

I just couldn’t write down every single one of Kelly’s inane comments, but here are five of the best:

Regarding the “fan vote”: she kept saying things like “the fans are loving her.”  Yeah, the people who are sitting in front of their computers to participate; ergo, convicts.

On Miss Alabama, when Susie informed us that “she survived a near-fatal car crash which left her in a coma and a wheelchair for two months,” Kelly chimed in,  “You would never know that in a million years.  Look at her walk!!!”  And later: “She taught herself to walk again!”  Is she a moron? Does she really think the girl taught herself to walk after that ordeal? Does she not realize that a case that severe would require physical therapy?

She complimented one on her earrings. While that’s nice and all, and I think that way myself all the time, it’s not really what observation material for a contest with “USA” in the title should be. 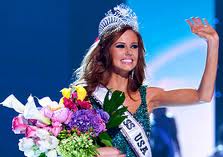 This is the winner, whom Kelly Osbourne told us has to wear sunscreen or she'll break out in hives. I think she'd agree that's TMI.

About the eventual winner, Miss California, during the swimsuit competition, she told us, “She’s practically allergic to the sun and needs to wear hats and apply SPF and sunscreen.  Otherwise she breaks out in hives. U would never know.” Guess what? She probably didn’t want us to know! And you don’t “apply SPF” separately from sunscreen—it’s in the sunscreen! And worse than that, she should know that everyone needs to apply it! Sheesh.

The hosts had just announced to not judge the dresses, yet that’s all that Kelly and Susie did!!!

This one is my supposition, from their statement about one of the girls that “she paid for her undergraduate education by working three jobs.”  Yeah–hooker, stripper, and phone sex operator.

The way they announced the four finalists was downright cruel; they separated the eight into two groups of four. Then they announced that three girls in one group had made it, thus making one girl be alone in her embarrassment and dejection. Then they chose just one from the other four.  Would it have killed them to make it two and two?

Speaking of the inflection I heard in my head as I wrote that last question, Andy Cohen said “Mazel to all,” just in case “Cohen” didn’t say it all. (It’s Yiddish for “luck.”)

What are some of the new innovations this year, that they proudly announced?  Could it be screwing Miss Congeniality and Most Photogenic out of their audience glory by just telling us who they were, rather than giving the kudos out on-camera? I guess they couldn’t have taken the three seconds away from Kelly and Susie’s banality.

Best part of the show, by far, (except for you guys who want to see hot chicks in tiny bikinis,) was the music from Tinie Tempah and Eric Turner. Shockingly hip for a show like this.

Now to those “all-important final questions”: 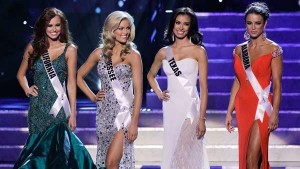 The four finalsits--pretty, but dumb.

They couldn’t have chosen four dumber girls as the finalists.  Trust me, I have some really stupid pals, (don’t worry…they can’t read,) but these girls are even worse.

Former winner, now commentator, Susie Castillo offered, “I bombed my final answer, but I still won.”  So in other words, that portion means nothing.

They should have just held this part in a dunk tank.  How would that be for an innovation? At the very least, a trap door should have opened under Alabama’s answer, that’s too long and stupid to write, but it involved what a great Miss USA she would make, though that had nothing to do with the question.

And Tennessee’s answer! I need the memory erase pill for this one, so read at your own risk: “Burning the American flag is not patriotic at all.”  Who ever thought that it was??? She continued “I’m a Christian and I would not appreciate someone burning the bible.  That’s just a line you do not cross.” That answer is the only part of the night that was truly “amazing.”

But, shockingly, I can’t believe that the girl who deserved to win, (of the final four,) Miss California, (though she’s really from New Jersey,)  did! So, I guess all’s well that ends well, and I can calm down for now..until the Miss Universe contest in the Fall. I have to go sharpen my claws for that one!