Trending
You are at:Home»BASKETBALL»KAREN’S RANT/ BASKETBALL/TELEVISION: THINGS THAT MADE ME CRY LAST THURSDAY NIGHT, AKA THE SPURS AND THE GRINDER BEING OUT–WHYYY???
By Karen Salkin on May 18, 2016 · BASKETBALL, KAREN'S RANTS, TELEVISION

THINGS THAT MADE ME CRY LAST THURSDAY NIGHT, AKA THE SPURS AND THE GRINDER BEING OUT–WHYYY???

Full disclosure:  I often get a tad depressed, (or worried or anxious,) the night before Friday the 13th.  Being more than a bit superstitious, I mainly dread the day.  But, I also have a tiny sense of relief, knowing that I won’t be doing anything the next day other than sitting on the couch watching TV, or lying in bed reading, waiting for the twenty-four hours to wash over me.

But last Thursday night was particularly hard for me.  So many horrible-to-me things happened in rapid succession, that I was turned into a sobbing mess for much of the evening. 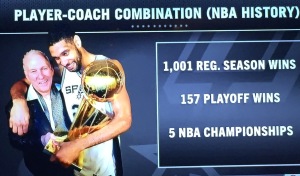 This graphic, about Spurs’ coach Gregg Popovich and Tim Duncan, sent me into crying over overdrive. Photo by Karen Salkin.

The worst one is that my beloved San Antonio Spurs went down to the Oklahoma City Thunder in the Western Conference Semi-Finals of the NBA play-offs. The Spurs have been my favorite team for a long time now; they’re always-classy, and, because their “Big 3” players (Tim Duncan, Tony Parker, and Manu Ginobli) are so old, (center Tim just turned forty, which is ancient in basketball-playing terms,) I really just want to see them play for awhile longer. I’ll be crushed when they retire, (which I pray isn’t right now!)

While that torture was being lived out on Thursday evening, I looked on-line to distract myself from the pain, and found-out that my favorite show, (not just of this year, but of all the ones since The OC went off the air!, which I still haven’t gotten over, by the way,) The Grinder, was cancelled! Mr. X and I are really sick over it. It’s one of the very shows we watch together. Fred Savage’s delivery is the most brilliant since Bea Arthur’s on The Golden Girls. To me, he’s the best actor on TV. (Even though I can hope we’ll see him on another comedy soon, it just won’t be the same. The Grinder’s ensemble worked together so perfectly. And who would have ever guessed that Rob Lowe is so funny?!) 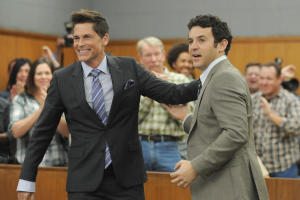 To pile on, so were several other shows that I watch all the time, including Nashville, Castle, and the one that just got even more interesting—The Family. What is wrong with these network execs??? (Yes, I know that now I’ll have more time in life, without being married to those shows, but not ever seeing them again is making me very sad. Wait—here’s an idea!: Perhaps Nashville should look into having that country music channel pick-up the show for next season!)

The icing on the pain cake was an epiphany I had about many of the people I know.  It dawned on me at that time, as it does about once a year, just how only-out-for-themselves most of my Los Angeles pals are.  My friends in New York, Ohio, Aspen, Austria, New Zealand, Australia, and other places, are so kind, as we should all be. Years ago, one of my male friends listed five things about me that he especially likes, and, even though one of them was “sexy,” my favorite, by far, was “kind.” I wish all my friends were.

But I don’t think about things like that very often. That realization just hit me on Thursday night, right at the same time as all these other depressing happenstances. So, it was just another part of the piling on.

I was going to publish this on this past Monday, but I knew I needed to work on it a little more. (I realized it was getting a tad dark. And I wanted to have at least a few pals left after they read it.) But on Monday, it got a bit worse, actually, but just in shallow ways, so please don’t alert the depression police. 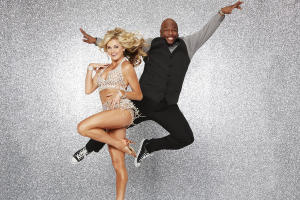 Wanya Morris with his pro partner, (who Mr. X gets the biggest kick out of,) Lindsay Arnold.

First, the Golden State Warriors, whom I love, (and whose winning ways are one of the few things we can all count on these days,) lost Game 1 of the Conference Finals to the Oklahoma City Thunder, whom, as I stated earlier, I detest. On the heels of that disappointment, I switched over to watch Dancing With The Stars, only to see Wanya Morris be eliminated, when he totally deserved to either win the whole shebang, or at the very least, come in second! Sickening. And creepy Ginger Zee, (whoever that is,) gets to be in the Final. It’s all because she’s on an ABC’s sister show, Good Morning America; without that, and with the hunched-over not-great dancing she does, she wouldn’t ever get many votes at all, because she is far from graceful. And she’s no fun at all. No personality, except for being full-of-herself. There’s really nothing to recommend her in life. (This rant will continue on Monday, the day of the final vote for that show’s champion, which, I’m telling you now, had better be that little girl fighter. But I think we all know it will be the deaf guy.) 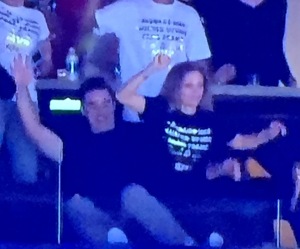 A very blurry photo (because she was moving so fast,) of Steph Curry’s mom hitting up against that young guy she was sitting with. Notice his left hand around her waist. Photo by Karen Salkin.

The only thing that’s cheered me up this week, at all, is discovering that I was not the only one who noticed that Steph Curry‘s mom was perhaps misbehaving the night his team clinched in the Semis (the night before my little freak-out.) I like that fam, so I don’t want to totally bust her, but it was a tad weird that her celebration of a great shot of her son’s was to continually bump her butt up against a younger man who had his arm around her waist, and then lean over and hug him, all with her husband just a few feet away. I had to go back and watch it several times because I just could not believe what I was witnessing! Yes, I’m sure it was innocent, but also sooo inappropriate! And oh so perfect to get me out of my funk!!! So, you go, Mama Curry!