Trending
You are at:Home»KAREN'S RANTS»TELEVISION/KAREN’S RANTS: DANCING WITH THE STARS–SEASON 22–PLEASE VOTE FOR PAIGE VANZANT!
By Karen Salkin on May 23, 2016 · KAREN'S RANTS, TELEVISION

DANCING WITH THE STARS–SEASON 22–PLEASE VOTE FOR PAIGE VANZANT!

I began this rant last Wednesday, (it’s the next-to-last paragraph here: itsnotaboutme.tv/news/karens-rant-basketballtelevision-things-that-made-me-cry-last-thursday-night-aka-the-spurs-and-the-grinder-being-out-whyyy,) as just one of the reasons for my mid-May depression. So now, to help me out of my funk, by allowing fairness to win, I have to ask those of you who also believe in fairness to please vote for Paige VanZant on Dancing With The Stars tonight. It’s the Final, and we want the best contestant to win, correct? (Here’s the free phone # to vote for Paige VanZant: 800-868-3410. I think you can vote five times per phone method, but they’ll tell you on the message you get when you call. You have three hours to vote, beginning at 8PM, your local time. You can also vote for her on-line, on the Dancing With The Stars website. If you do it, thanks for helping the right person win! She appears to be such a sweet girl, too.) 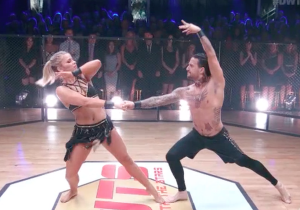 We don’t want a guy to win just because he has a disability, nor the untalented weather girl of ABC, just because this is her network, and they’re touting her every chance they get. I always want the person who deserves it the most, based on their dance performances, to come out the victor. (It is supposed to be a dancing competition, after all.) That does happen quite a bit on this show, I’m happy to say, but not enough. And I’m really worried this time, because Paige, being a UFC fighter, (or whatever she is—I’m still not familiar with her outside of this show!,) just does not have a big fan base.

I’m preparing to be disappointed tomorrow night, anyway. Often, this show comes out with the correct winner at the end. But first they stack it in the favor of the contestants they want to be in the Final, which totally occurred this season, as well.

I’m still upset that Wanya Morris, of Boyz II Men fame, was eliminated last week, when he should have been the one to win. He was the front runner from the start, but I guess he just didn’t have a big enough fan base, either. (And it didn’t help that the judges marked him so low the week before, for a tiny little slip on a prop. They had to know that would make him be eliminated before the Final, but I have a feeling the ABC powers told them to try to do that, anyway, because they wanted to make sure the deaf guy and their network employee stayed on. I knew from the get-go that either Wanya or Paige would have to be sacrificed.)

So, here are the two who are left on tonight’s Final with the deserving Paige: 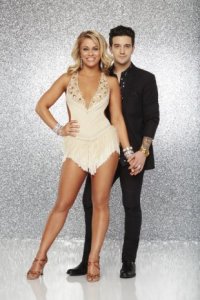 Nyle DiMarco, who’s a very good-looking deaf guy. I think he was the winner of one of the seasons of America’s Next Top Model, but I’m not really sure. He’s very pleasant, and it’s more than amazing that a person who can’t hear the music can dance so well. Truly. But, he’s far from the best dancer. It’s just amazing that he can do it at all! He’s totally deaf! But it’s sort-of unfair to have a person with a handicap compete against people who don’t have one. An obvious one, anyway. The public always supports the underdog! (Yes, this is more an entertainment show, rather than a strict competition, but still…) But wait—I just thought of something! Paige VanZant was so bullied in high school that her family had to move to another state! That should count for at least some sympathy votes, shouldn’t it?

And then there’s creepy Ginger Zee, who’s the weather girl on a Dancing With The Stars sister show, Good Morning America. She is really not a very good dancer, even though they try to make-out like she is. They gave her Val Chmerikovskiy as her pro partner, who’s perhaps the best now that Derek Hough left, and they always give her the best music, and easiest dance styles. She’s always hunched-over, which the judges never mention, even though it’s one of the first critiques they give everyone else who is. And she is so far from graceful that it’s almost a joke. She doesn’t even have a fun, nor pleasant, personality! On top of all that, she’s full-of-herself! There’s really nothing to recommend her in life. (And now, she’s saying that she’s injured, and may not even dance tonight. I’m sure all that drama is just to conjure-up sympathy votes. But it won’t matter, anyway, because I’m sure that Nyle is a shoe-in for the win.)

Mr. X pointed-out that it’s not really a dance competition, per se. It’s more about who is everyone’s favorite person on the show, not who they think the best dancer is on the show. He said, “If it was truly a dance one, there would be no question that Paige would win, as far as skills go.” I hear ya, bro.

I can’t conclude this opus until I make a plea, once again, for the producers of DWTS to get rid of that highly unpleasant goon of a co-host, Erin Andrews. Other disgruntled viewers ask me to write against her all the time, including the always patient Mr. X. Not only is she annoying, with the most horrible nasal voice and speech, but she makes everything about herself, not the people on the show. Former co-host, Brooke Burke, may not have had much of a personality, but she never injected herself into her interviews, even though she was a former winner. Creepy Erin constantly tries to remind us that she slept with her pro partner, Maks, (which I’m sure he regrets, maybe even as he was doing it!,) and talks about how it all affects her, rather than the contestants she’s talking to! She makes us want to puke; she literally brings us down every time she appears. And she’s so abrasive; instead of politely asking the couples who just performed to come over for their interviews, she harshly yells at them to, “Come over here!!!” She’s downright disgusting. ABC—we’re begging you to hire someone else for next season. Anyone!!!

Reminder to please vote for Paige: The free phone # is 800-868-3410. I think you can vote five times per phone method, but they’ll tell you on the message you get when you call. You have three hours to vote, beginning at 8PM, your local time. And you can also vote for her on-line, on the Dancing With The Stars website. If you do it, thanks for helping the deserving person win!