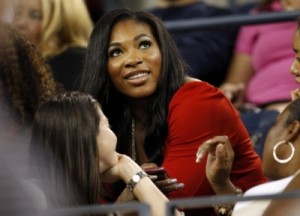 First of all, more shocking than Andy Roddick’s second round loss was Serena Williams’ face! Am I the only one who noticed she had major face work done??? I can’t find mention of it anywhere. I was shocked when I saw her appearance. She looks like a young Asian girl!

There’s nothing wrong with freshening-up every now and again, especially if you don’t look great to begin with, so I’m not putting Serena down for changing her looks a taste. And she still has the same big body and horrible pointy nails. What I am questioning is just how she’s confusing her face with her feet!

She’s stated the the reason she couldn’t play in the US Open this year is that she somehow cut her feet on broken glass that she didn’t know was all over the floor of a restaurant in Munich, but doesn’t seem to have any details. And she was shot at her very recent birthday party wearing heels. If it was true about her feet, why hasn’t she named the establishment and sued them? Their negligence would have lead to her missing out on hundreds of thousands, if not millions, of dollars! 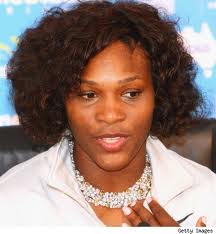 Serena's OLD face. At the very least she had a shave, which you can tell she needed.

So, here’s my theory: she didn’t want to play at the Open this year for several reasons, and she needed an excuse. And at the same time she could have surgical facial improvements. Here are my points:

Firstly, she was ousted last year when her atrocious behavior led to her receiving a point penalty for poor sportsmanship. (You can read all about it here: www.itsnotaboutme.tv/news/2009/10/12/sports. ) So she didn’t want everyone to be talking about it again, which you know they would. It would have been the main topic in all of her press conferences. And she didn’t need the tournament to maintain her number one ranking; only two other players could take it away from her by winning, and she was counting on that not happening. (One is already out, and the other has never won a Major.) By the time she shows up at next year’s tournament, the media will be onto some other story.

Also, the US Open put her on probation last year, so if she had one more outburst, she’d be banned permanently. So, she didn’t need the money, fame, or ranking protection, so she could sit this one out. And maybe even give her big sis, Venus, a better chance to advance, without going through Serena, as they would possibly have to do each tournament to win. What better time for plastic surgery?

But she needed an excuse for the WTA, the governing body of women’s tennis, who might sanction her if she didn’t play a Major when healthy and not retired. (I honestly don’t know all their rules.) So, she concocted the foot surgery one. If someone checked hospital records, they would see she did indeed have surgery. Only it was on her face! And, if the photogs shot her leaving a hospital or doctor’s office, the excuse is her feet. Pretty clever actually.

Again, this is only a theory, but check her before-and-after pix. She may have also had foot surgery, but even before I saw her face, I thought something was fishy with the cut-glass story. Just no one is calling her on it. She has no mandatory press conferences, so she doesn’t have to answer any questions about any of it. And the actual tennis commentators tiptoe around the Williams sisters all the time because they don’t want to be accused of racism, which wouldn’t really be the case at all, so they never do much of anything but kiss her ample rear-end. And there’s enough for the whole staff to work on.

So, for the first time ever, I must laud her on this wonderful deception. The press is asking her about her feet, rather than her awful outburst last year, and she gets to look better! And she gives Venus a better chance at winning, or at least of getting to the final. (We don’t know if they would have to play each other along the way because Serena wasn’t in the draw, as she had already declined to enter when it was worked-out.) And we, the audience, don’t have to be subjected to watching her play! It’s actually much easier to tune in knowing she’s not there. There are no losers in this one.

Of course, this whole thing is not our business, and she has every right to play or not play whatever she likes. (Well, actually, there are rules about that, but you know what I mean.) And the plastic surgery idea is all speculation on my part, but I’m pretty sure I’m correct on this one. 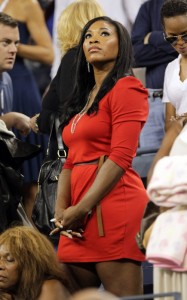 But even a new and improved visage couldn’t improve Serena’s behavior. She was as rude as ever, even as solely an audience member. As a participant, she would know more than anyone that it’s disruptive to the players on-court for audience members to enter while they’re playing. That’s why the ushers hold late-comers or coming-back-from-the-grounds folks until the change-overs for the players. But, because she seems to feel she’s above everyone, she came in during play, and the ushers let her because she’s Serena Williams. Terrible. What kind-of fit would she have thrown if someone entered the stadium, and especially moved to an up-close seat, if she were the one on the court? I shudder to imagine.

And, as if that weren’t bad enough, she was chatting up a storm, and texting, every time the camera caught her! Oh, when she wasn’t nodding-off, that is. Players should know better. It’s like if an actor visited another actor’s play and then sat in the audience doing things that any actor on stage would be annoyed by. The people in each profession should have the most exemplary behavior in their own fields.

Anyway, now I’m out of time and room to discuss all the other goings-on of Week One. So, that column will be up tomorrow, and I hope you get to read it because there was lots to praise about other players. And then there’s Andy Roddick. He abused a linesperson, too, the other night, just in case anyone did miss Serena.

Oh, last thing I just remembered–the other night, one of the McEnroe bros asked her what she wanted to be remembered for, meaning which title or titles. And she answered something to the effect that she wanted it to be as the tennis player who did so much to help the world. (I’m paraphrasing. ) And then she tried to list her charitable works, but they accidentally cut her off. Just the day before, in another interview, the really lovely and much-loved Kim Clijsters, who beat Serena last year, said, when asked, that she doesn’t want to list her good deeds (again, paraphrasing,) because everyone performs them and should just do so without having to let everyone know about them. And that’s what I’m talking about.

[By the way, I really do hate being this snarky in a public forum, rather than with just my pals.  and since I don’t know the woman personally, she may be nice, who knows.  But I just feel that her public behavior is so worng so often, that I must call her on some of it.  But I really do appluad her new face.]