I was blown away by the Royal Wedding on Friday morning. (Or Thursday night is more like it, for those of us who stayed-up overnight to see it live.) I actually surprised myself with just how into it I got! I didn’t see myself caring leading up to it, and didn’t even watch most of the shows about the upcoming nuptials. 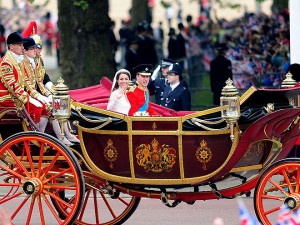 Then, all of a sudden, a couple of days before, when I was telling my little mother to make sure to watch it, I realized just how special the whole event was. I was pointing-out to her that she had the opportunity to witness all three major royal weddings, (Queen Elizabeth and Prince Philip, Charles and Diana, and now William and Kate,) and that’s when it clicked in my mind how rare these really are.

So, with that in mind, and with seriously just a modicum of planning, I whipped-up some of the fun snacks I suggested to you on Friday, mainly because they sounded so perfect to me as I was proofreading it! Then, I donned a hat, that looked surprisingly like that of some of the classiest guests, some light blue lace gloves (the color of the bride’s mother’s ensemble, as a matter of fact,) a rhinestone bracelet, and the piece de resistance, a rhinestone bow tie, and made Mr. X rock a fedora.

I opened a box of special teas that I had been saving since one of my best buds bestowed them on me for a previous birthday, which we had with honey and milk, as the English do. We had warm raspberry scones with strawberry preserves and real clotted cream from England (I often keep it hand,) and giant strawberries, that Mr. X paid a fortune for at the expensive market in town, with vanilla and cinnamon whipped cream that I made from scratch. A repast fit for a queen, if I do say so myself!

We watched every second of the proceedings until just about four AM, but had to be up in just a few hours, so we taped the aftermath to watch that afternoon when we returned from an engagement. So we had elevenses at midnight, and then cream tea at five in the afternoon during the wrap-up. (You’ll have to wait for the tea book I’m working on to get the explanations, if you’re not familiar with those meals.) I’m afraid that this royal repast may have made me gain back the five pounds that I had recently lost. But it was well worth it for the fun we had and the memories we made. I just hope that you all had as good a time as we did.

I was too riveted to the screen to jot down my thoughts as the whole pomp and circumstance was unfolding, but I did so when I continued coverage the next morning, so, here are some of them, in an order I worked hard on, but I don’t know why because they’re still pretty random, especially for linear-thinking me:

I watched, and recorded, several stations, and BBC America had by far the most authentic coverage. But, sadly, the picture was not very sharp on our TV. As a matter of fact, this was the first time that I ever wished we had already gotten HDTV, that Mr. X wants all the time, but we just never have time to go TV shopping. This will teach me!

E!’s commentators were basically idiots who talked over it all!!! Shame on them.

The best person on a panel was British actor Rupert Everett. He not only had some interesting insights, he had no qualms about correcting the hosts of the TLC show he was guesting on, as they kept getting everything wrong. Good for him.

Piers Morgan, part of CNN’s coverage, was the dishiest commentator of them all! He even told us that his “friend,” a famous socialite in England, was there with her new nose that she had to get done the week before due to cocaine damage! Nice friend.

He also stated emphatically that we’ll never see a royal wedding again in our lifetime–what an idiot! We can ostensibly see one again in just twenty-two years! Or even less. (That scenario will be if Kate and Wills have a son within the year and then he gets married at twenty-one.)

Speaking of them having children, this occurred to me, and I almost hate to ask the question, but I would really like to kno0w the answer: do you think that Kate had to go through fertility tests to prove she can give him an heir? I really wonder how that all works. In the days of Henry VIII, he would have his wife done away with if she couldn’t conceive.

Piers also suggested that Kate’s sister Pippa and Prince Harry should get together, which is soooo rude to Harry’s girlfriend, Chelsy Davy.

Kate is just perfect for this regal position. The royal family were very lucky to get her. And I’m afraid that she was the star of the day, by far, even though it was supposed to be about the Prince taking a bride to be the future Queen.

I loved her dress and her hair down and her perfect body. She looked like a Barbie doll, with her tiny waist and upper body. I understand that they padded her hips to make her waist look even tinier. Brilliant move!

I think that she actually gets prettier all the time.

While we’re on Kate, she never even once had any superfluous movement during the entire ceremony, and only twice moved her hair back on the balcony around the time of the kiss. What a woman.

As much as I love her, I absolutely hate that her real name, Catherine, begins with a “C”!!! I had just always assumed it was a “K” since they spell her “Kate” with a “K.” Do you think it’s too late for her to change it? 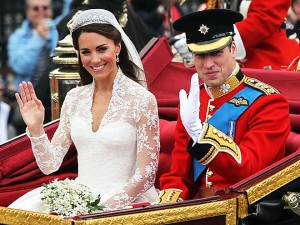 Kate looks great from all angles. She’s not gorgeous like a model, but she’s truly beautiful–like a breath of fresh air. She’s possibly the most beautiful bride in history, at least equal to Grace Kelly. And that’s saying something!

She’s one bride whose wedding had to far exceed her expectations from when she was a little girl, no matter how grand her imaginings were.

As much as I loved it all, I do wish that William had turned around to watch Kate walk down the aisle. I’m assuming protocol said he couldn’t do that, but seeing it on TV will never be what seeing her walk in person would have been. [Note: at least one commentator said he did sneak a peek, for just a second, but it was when the camera was off him, so I don’t know how she made that assumption. But I’m really hoping it’s correct.]

And I also wish that they could have smiled and interacted more, but, by the way they appeared to be holding their smiles in, I have a feeling they were told not to smile more because that’s not really royal.

Speaking of royal, I hated hearing people talk us through it who had no English accents. It was really grating to hear American commentators after such gorgeous speech from the Brits.

I was a tad surprised that there weren’t more celebrities in attendance; the Beckhams, Elton John, and Guy Ritchie were the only ones. I guess the fam isn’t friends with other celebs. If Diana were still alive, the wedding would have been as star-studded as the stupid people reported.

As much as I loved Kate’s wedding dress, I hated the fuzzy shrug she wore over her evening dinner reception dress. (More on her dress later.)

One of William’s and Kate’s new titles, Baron and Baroness Carrickfergus, reminded me of a Monty Python skit! I doubt they’ll ever use that one. If Kate had been apprised of that title before, she may have left Wills at the altar! I’m sure I would have.

Here’s a shock–most of the reception menu didn’t appeal to me, except for the chocolate biscuit cake whose description was making my mouth water. [Note: for more of my food…eccentricities, shall we say, check-out my “Foods I Hate” column that should be published in the next two weeks.] 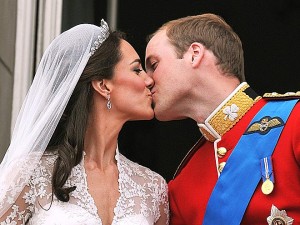 I can’t believe I’m such a sucker for romance that I actually loved that the happy couple shared two kisses with the public. And they were good ones, too!

In this age of disgusting sex-tape whores, it was refreshing that everyone, including the commentators, was carrying on about the kisses.

Now to the hats! I still don’t get Britain’s obsession with hats, but it does seem like a fun thing to do, like young girls playing dress-up. 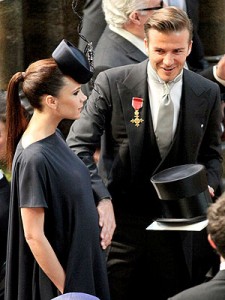 Victoria Beckham looked the best of all the guests, even with that stupid double-pointed hat.

They also didn’t explain, or even mention, the riderless horse who bolted along the post-ceremony route, until much later on, when one of them made a very quick mention of it. 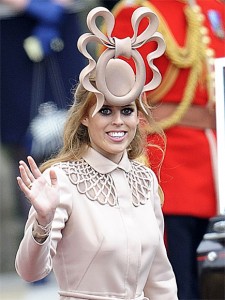 What was Princess Beatrice thinking???

I actually feel bad saying this, but Fergie’s daughters, the Princesses Eugenie and Beatrice, looked like they were in a Tim Burton movie. Or any version of Alice In Wonderland. (I swear, I had a nightmare about Alice last night, and I’m absolutely convinced that it was because of their appearance at the wedding.) Their looks also reminded me of the evil stepsisters in Cinderella. Shouldn’t they have advisers to break it down for them???

Speaking of Fergie, I actually felt bad for her to be left out, especially because her daughters got to go. A similar thing happened in my family years ago, and it was such a big deal. My sister wasn’t invited to a cousin’s wedding and it caused such a rift between my parents that we all felt terrible. I’m not even close to my sister, but I was torn apart for all of the family, being the empath that I am.

And now to some wedding gown thoughts:

How did they get that material to not wrinkle??? Even Di’s and Grace’s dresses did!

I wonder why, during the build-up to the wedding, hardly anyone interviewed David Emmanuel, the guy who, with his wife, had designed Princess Diana‘s wedding dress. They seemed to find ever other person in England who ever designed any article of clothing, but not David. I’m so surprised because I knew him a while ago and he’s fun.

About a decade ago, a television producer tried to put together a talk show for me to host with David Emmanuel, so I got to know him pretty well during the month-long process. We even fell asleep together at a viewing of the film Rob Roy! He was happy to do plain old person stuff in and around Los Angeles, and he had interesting fashion views. As a matter of fact, when they asked me to do the show with him I didn’t get the big deal about someone who had designed Di’s dress. But after watching all the coverage of this current wedding, I finally understand what a big deal it was. And I repeat that he should have been a commentator.

But most importantly of all, it appeared that William and Kate stayed calm and enjoyed the day and their whole journey, and that was so lovely to witness.

Happy Marriage to them!