[Note: I know it’s the Miss USA contest, but I’m not writing the “Miss”s because it’s assumed. And even the hosts didn’t say them!]

I finally got to watch this event on DVR yesterday because I was, as usual, overbooked the night before. So, here now are my thoughts on the telecast, as the show wore on…and on:

I have to admit that it was a better show than usual, even with the third hour added.

Marc Broussard and The Dirty Dozen Band really added to the introductions of the contestants, I must say. They were actually fun intros all around. 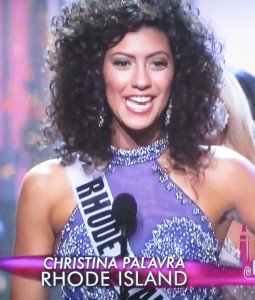 The fun Miss Congeniality from my adopted state of Rhode Island. Photo by Karen Salkin.

Mr. X and I loved Rhode Island from the second we saw her! She just looked so fun. [And much later, they announced her as Miss Congeniality! I just wish they hadn’t deprived us of seeing her reaction when it was announced.]

I can’t believe that I wore outfits skimpier than theirs for an entire decade from 1995-2005! OMG! But, I swear, they looked fine because I was really skinny. [Sidebar: I wore one like the ones these girls did for the opening, when I was a guest on a dance show. Mr. X loved the show, so I did it as a surprise to him. But I brought it to show some friends in New York, and when I got to Rhode Island, my little friend, Ronnie, found it in my suitcase, and goaded me into playing it for my pals there, which was a tad embarrassing to begin with. But then he put it on for the patriarch of the family, his great-grandfather, and I was humiliated! As was the man!]

Most of the girls were really good-looking, or at least made the most of their looks. 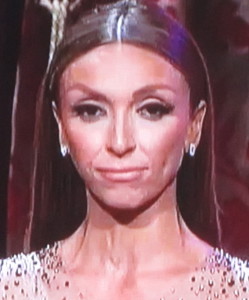 The inane hosts almost ruined the show though. I told Mr. X to watch out for that Giuliana woman to say everything is “amazing,” when it’s not even close, and that she’s “obsessed” with things that no one else would be! Mr. X said he was annoyed by all their hyperbole. [The two hosts got better and less annoying as the evening wore on. Or I was just too exhausted from the night before (I went to a play opening and the after-party, and when I got home from that complete evening, I watched the DVRed Tonys with Mr. X, and then the entire DVRed Game 2 of the NBA Finals, including the pre- and post-game shows, and the halftime report!,) to notice much of what I was watching the next day, on practically no sleep.]

But Giuliana does have the straightest hair part I’ve ever seen!

Early on, I predicted Utah would win, but she didn’t even make the Top 20! 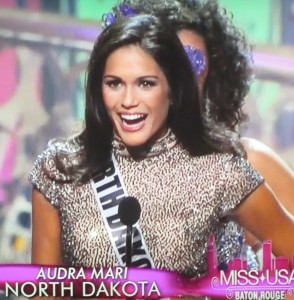 How cute-looking is this girl? She should have won, hands-down! Photo by Karen Salkin.

But I got one really correct right from the start because the very first I picture I took to post here was of North Dakota, who came in first runner-up, and should have won!

How is Rumer Willis a judge of beauty??? She’s downright homely! Mr. X said he’d rather look at shoes.

I love Karl Malone, but I thought that he might choose the most wholesome chick, because that’s his white bread rep.

I actually liked the new way they introduced the judges. They each walked out on stage and got his or her due. That was good, because we saw more than just their faces.

I’m not a fan of his, but Dolvett (a trainer from Biggest Loser,) was a good choice of judge. He’s in-shape, nice-looking, and on a popular show on the same network. And of color.

Lance Bass was also a good choice. I mean it. Who’s better to judge glamorous women than a famous gay guy?

Who is this judge Melissa Peterman? How can a heavyset chick, who’s dressed like it’s the fifties, judge other women?

Except for Rumer and this Melissa woman, it’s not a bad judging panel, for once.

What a waste of time this backstage woman, Jeannie Mai, is!

The quickly-stated rules mean it’s all up to Donald Trump, in the end.

I’m so sorry, but I can’t write fast enough to critique all the players as fast as I share my bon mots with Mr. X, so you are missing out a tad on my snarkiness. Maybe that’s for the best, though.

How did last year’s winner win? She even has what Mr. X calls a “snaggletooth.”

Many of these girls appear to have so much going on, which is great! They’re all so much better than previous years. (Except for ones like Louisiana, whose claim to fame is that she goes fishing with her dad! Some are real athletes, some work in the medical profession, and some do charity work. But others in the Top 20 just love their pets! Or have siblings. At least these video packages help us know for whom to root.)

The stage lighting was dreadful! They all looked better on tape. 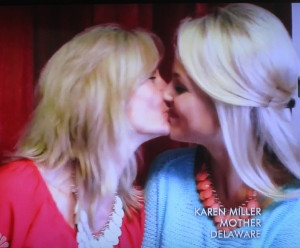 Miss Delaware’s mom, macking on her! Can we all say, “EWWWW!?” Photo by Karen Salkin.

The only true “ew” moment: When they did a feature on the girls’ families, they actually showed video of Delaware kissing her mom…on the lips!!! It was like that SNL skit where the enite family does this! They can’t come up with a memory-erase pill fast enough for me to forget that horrific image!

Wisconsin has the worst voice…and she’s a sportscaster!

Thank goodness someone young finally said, “My sister and I!” Most people nowadays speak so poorly, (including my college pals!,) but not Miss South Carolina.

Mr. X said Jeannie Mai is brutal! He pointed out that she was making even Florida Georgia Line uncomfortable! 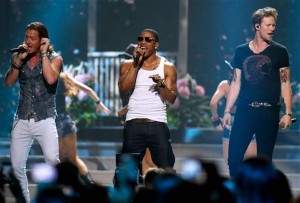 The one on the right looks like Prince Harry a little, don’t you think? And why would Nelly wear that on this show? I don’t understand.

Did anyone else notice that the short-haired guy from that duo looked like Prince Harry from certain angles? I never did before this show.

Speaking of resemblances, I finally realized who Giuliani looks like–Olive Oyl! I dare you to not agree.

As I told you before, (but it bears repeating,) Mr. X and I predicted the Miss Congeniality winner right from the beginning! We’re so happy for Miss Rhode Island, (especially since I’m still connected to her hometown of Providence, where I used to live.) She looked like the most fun one, by far.

Indiana has a muffin top, yet still made the Top 20. So, how bad do the other thirty-one contestants look? (I know, I know, people have been tweeting that she’s the only one with a real body. But I still think it’s strange for this kind of competition.)

Arizona may be gluten-free, but not certainly not calorie- and fat-free!

That is one scary skinny body on Maryland. But I’m glad she got into this group because she’s the one who forgot to take the mask away from her face during the intros, and I’m sure her family was disappointed that her visage had not made it on camera, at that point.

Oklahoma was round-shouldered and pigeon-toed. She does not deserve to be named Brooklyne! 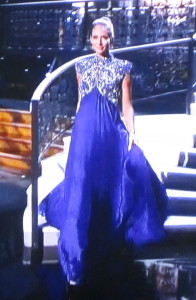 Louisiana’s gorgeous gown. But it has shoulder pads because she has weak shoulders! Photo by Karen Salkin.

What’s with all the trampy facial expressions???

Louisiana has the best face, but not much going on otherwise.

I’m so glad Nelly dressed up for this!

I’m still wondering why they added the third hour. Was it to be able to have more finalists than usual, and show them in-depth, or did they decide to implement those changes after they made it longer to begin with?

Jeannie Mai always tries to make it about her.

This new “twitter voting to find the sixth finalist” was not fair. Only people in the eastern and central time zones can vote, unless the fans get in touch with fellow rooters in the other states to tell them who to vote for, thus ruining the surprise for those viewers of watching live! 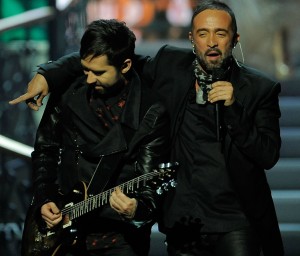 Why do the hosts keep putting tripping in the girls’ minds??? And they keep telling us that they’re walking in “super-high heels,” like they’re walking on sheets of broken glass, barefoot! Enough. It’s their own choice to do so!

The performance by musical duo Camila was like an SNL skit, in voice and look. The lead singer is like a Chris Kattan character. Or a Fred Armison one. How are they successful? They don’t sing well, and they both look like Boo Radley! (Hey—that would be a great name for a rock band, wouldn’t it?) 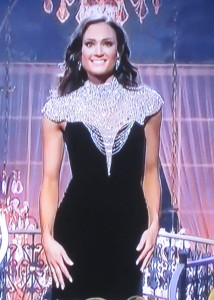 Miss Iowa’s stunning gown. The chandelier in the background makes it look like she’s wearing a crown! Photo by Karen Salkin.

Iowa wore the most stunning dress I think I’ve ever seen. And it was perfect to be crowned in, (which she wasn’t, which was fine because, as I said before, we rooted for North Dakota all the way.)

Wisconsin was too busy thinking she’s all that, and almost went down during the gown phase of the competition!

The worst dresses were on Nevada, the eventual winner, (the red dress,) and North Dakota, the eventual runner-up, wearing the green dress, whose zipper and beige netting we could totally see. (She still should have won.)

Louisiana wore shoulder pads! Mr. X called her own physical lack of shoulders early on, from the second they showed us the Top 20 video package! But the blue dress with a sparkly silver top was gorgeous.

I loved North Dakota’s forward-walking. It’s because of her hockey playing.

I did love the panoply of different gowns.

I called the entire top six, and in the correct order! 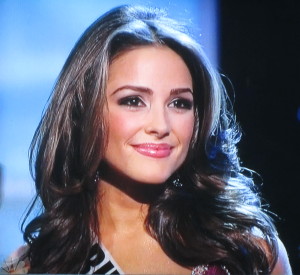 Last year’s winner, Erin Brady, gave a good farewell speech. (But the 2012 winner, Olivia Culpo, from Rhode Island, to boot, is the supreme example of what a Miss Anything should look like! She even became Miss Universe, deservedly so.)

Let me know as soon as u can, please.

The winner should have been North Dakota, but Nevada gave the better final answer, if the judges did indeed vote and the outcome wasn’t pre-determined by Donald Trump, which I wouldn’t be too sure about.

I just realized something—the hosts never once said the name of each girl; the girls themselves stated them at the very beginning, but that was it!

But all in all, it was a successful enough show. Maybe by the time Miss Universe comes around, we’ll finally have my podcast up and running, so we can all watch together and you can hear my comments live, though if you have a contestant in the race, you may not want to!