Trending
You are at:Home»KAREN'S THOUGHTS»KAREN'S LESSONS»KAREN’S LESSONS: THE DIFFERENCE BETWEEN “BOUGHT” AND “BROUGHT”
By Karen Salkin on May 7, 2019 · KAREN'S LESSONS

THE DIFFERENCE BETWEEN “BOUGHT” AND “BROUGHT”

I’m sure that most of you are scratching your heads about why I would have to tell anybody the difference between these two very disparate words. Yes, most people don’t even put them together in their minds, because they know that these two words, though one letter apart, have totally different meanings. 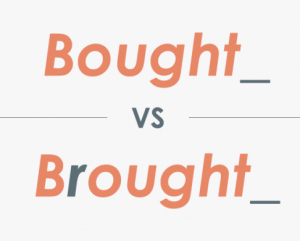 But I’m doing an entire column on it for the people who don’t know, and are smart enough to want to learn.

I first became aware of this egregious error a couple of years ago, when I had a good pal with whom I had the following convo one day, after she had not been feeling well. (I’ll call her “Ami.” Get it? “Ami” means “friend” in French!)

Me—How are you feeling now?

Me—I thought you were too sick to go out.

Me—Then how did he buy you dinner?

Ami—He bought it over to me!

Me—You mean he brought it over to you?

Ami—Yes, he bought it over.

I was, of course, horrified. We had been besties for about a year at that point, so I assumed she’d want to be corrected, so she wouldn’t sound so inarticulate to anyone else. So I gently explained the difference to her. And I assumed that that would be the end of the topic.

But no such luck. She continued to use “bought” for “brought.” And I continued to correct her, more and more urgently as the years went on. Yes—years! 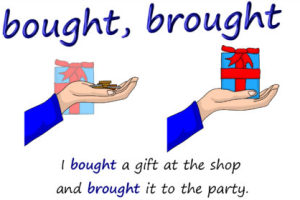 Misuse of language, especially when one has been schooled on her mistake, is like nails on a chalkboard to me.

And now Mr. X and I have noticed a few famous people who also don’t know better. They’re all successful, but far from mental giants. (Think athletes and dancers.) I’ve used Twitter to let some of them know the difference between these two unrelated words, to no avail. I really can’t understand that ignorance because I would be mortified if I had been using the wrong word, and would always welcome the correction.

So, for those of you who are guilty of this same grammatical infraction, but don’t want to continue to sound uneducated, here’s the same explanation that I gave to Ami:

Do you think that “buy” and “bring” are the same word? No, of course you don’t! Well, “bought” is the past tense of “buy,” while “brought” is the past tense of “bring.” See? Two totally different words! Just because they’re spelled almost the same, they do not have the same meaning. That’s because…they’re totally different words!!!

So, I hate to say this, but if now that you know the difference, you continue to misuse “bought,” you are, to put it kindly, a dunce!!! And every person of normal intelligence will know it. 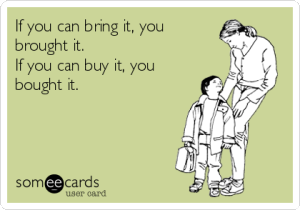 If others’ opinions of you do not matter to you, let’s break it down to some real world applications. You might be rejected from a job just for saying that, or, worse to some, you might lose out on dates! Or intelligent friends. I for one, could not take hearing Ami not change it. Here she had me as a friend, with my 147IQ, (if I do say so myself,) and my English and Speech teacher parents, and she did not take advantage of my brain. I seriously cannot understand that. The rest of my friends always noticed her incorrect word usage, and asked why I wasn’t helping her to sound smarter. They were as appalled as Mr. X and I were at this one infraction.

So, I hope that if you’ve also been misusing “bought” and “brought,” you’re more willing to learn than Ami was, and that you’ll change your ways asap.

You don’t even have to thank me. Someone learning is all the thanks I need.