I’m actually excited about this National Day! National Tea Day is giving me the opportunity to discuss the various tea meals that one can have over the course of the day, and make sure that everyone knows the correct monikers for each. No matter how much I know about any other subject in life, “taking tea” is one that I am a true expert in! 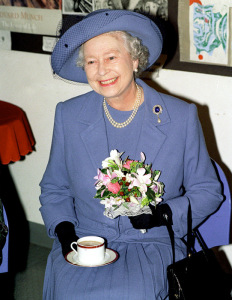 I adore this picture of Queeen Elizabeth looking so happy with her cuppa and bouquet!

National Tea Day is always celebrated on April 21st, which, coincidentally, (or not) is Queen Elizabeth’s birthday. She’s ninety-five today. I wonder if she’ll be taking tea to celebrate it in this very sad and stressful time for her. If she does, I hope it soothes her soul, as it always does mine.

Before we get to my tea “lesson,” I want to share one little personal note. I’m always proud when a friend calls that they’re on the way over, and I have enough ingredients on hand to whip-up some semblance of tea meal to offer them at a moment’s notice. (Just not this past year, of course, and for the foreseeable future, as well.) One time a friend whose parents are British actually asked if she could come over for crumpets, of all things. And guess what? I had them! I had just bought my first (and only) batch of them the day before!

My favorite tea repast is Afternoon Tea. Unfortunately, very many people, who think they’re being classy, refer to this meal as “high” tea. They must have been high when they first heard about it because what we have as an afternoon treat is far from being “high tea.” I’ll get to the difference in a minute, because I have be very proper here and go in the order of the day. 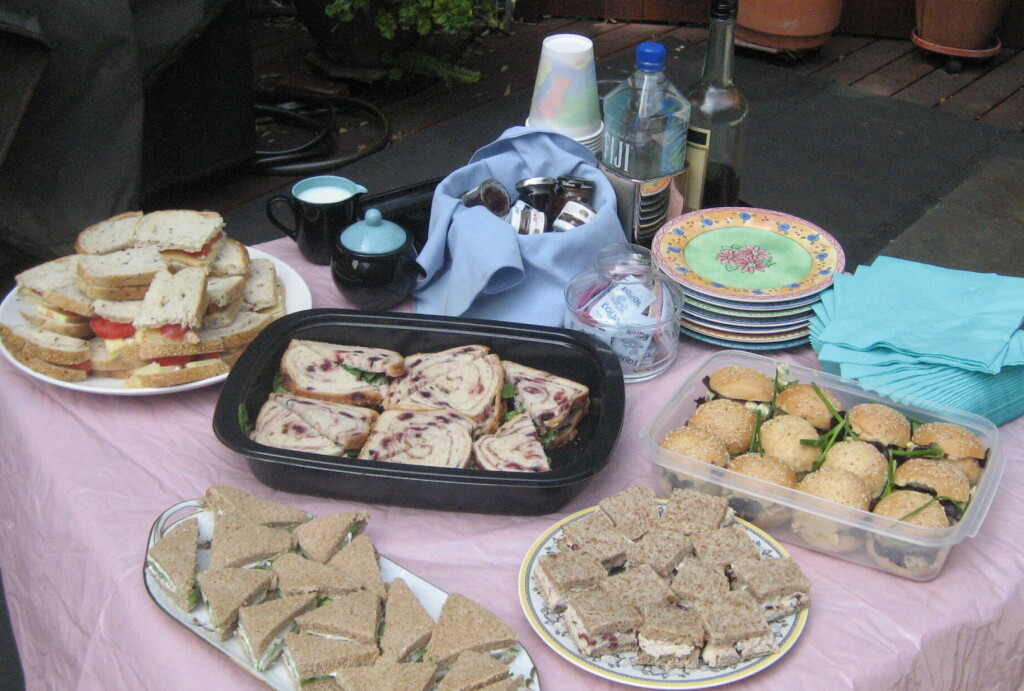 Part of an Afternoon Tea I threw for a few of my friends several Easters ago. Photo by Karen Salkin.

But first, let me define a few tea terms for you:

Taking Tea—This is how the British refer to having one of the tea meals, as opposed to “having” tea.

Cuppa—Just the Brits’ way of saying “cup of,” but it makes it a bit more interesting. 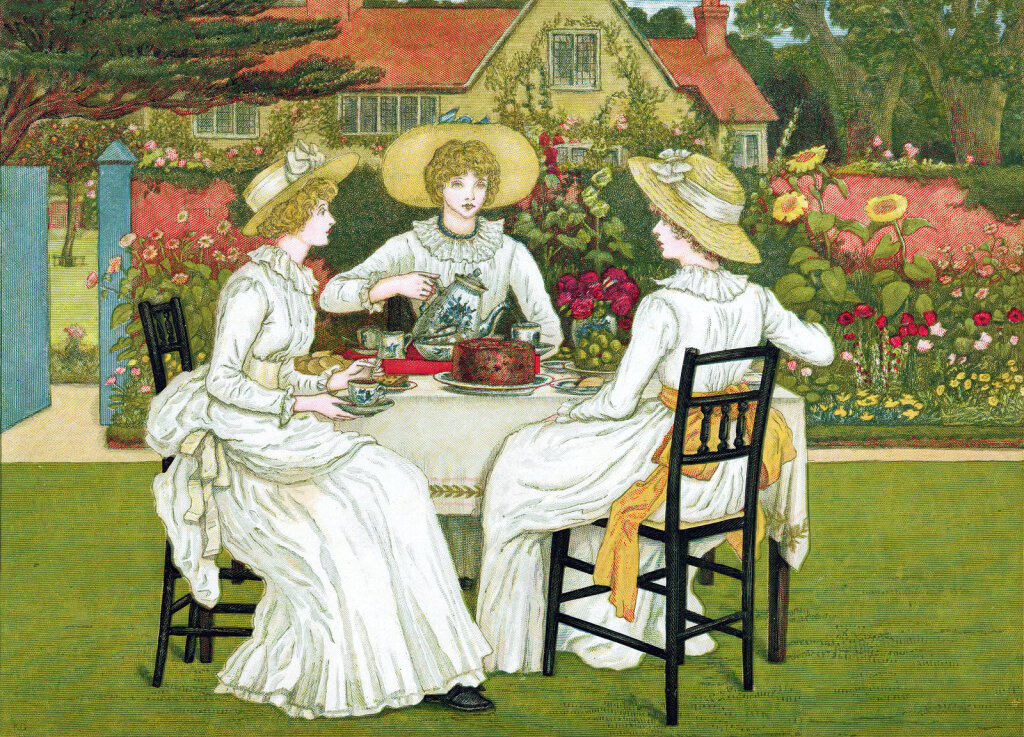 I’d love to be at this Tea!

Clotted Cream—The most incredible substance on earth!!! And no, it’s not even close to whipped cream. It’s thick and spreadable and delicious. You can always make a version of your own, (as I have been known to do occasion,) but the official one is best. (Devonshire Cream and Double Cream are in the same category and are just about as heavenly.)

Crumpet—This is a small griddle cake, which is kind-of spongey in consistency, and is far different from a scone, which is much drier. 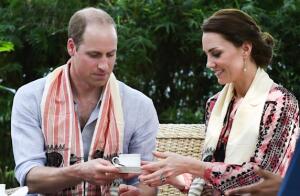 Two of the Royals, William and Kate, taking tea, most likely with honey and milk.

This last one is not a definition, but I’m advising that the Royals are known to take their tea with honey and milk, just as I do!

Now let’s get to the various times of day and what to partake of during them:

Elevenses—Guess when this one is taken? It’s at 11AM, of course! Duh. It’s just a short break with a tiny snack to get you through the day, when your energy may be waning a tad. It’s basically just a cuppa with a small snack, such as a biscuit or crumpet. Nothing fancy or heavy.

Cream Tea—This one is a more filling snack than Elevenses, but not even close to being full Afternoon Tea. It’s usually taken as an afternoon snack, when one is going to have an early dinner later. It consists of a cuppa, (of course,) and a scone with clotted cream and jam, preserves, or marmalade. I could have this semi-meal every day of my life! I don’t even love tea itself, but use it as an excuse to feast on the best substance on earth—true clotted cream! OMG! 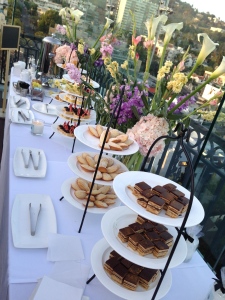 The dessert portion of a very big tea party I attended at a swanky hotel. Photo by Karen Salkin.

Afternoon Tea–This is an absolutely glorious meal! If ever you want to do something special for yourself, having Afternoon Tea is the way to go. It’s absolutely scrumptious and soooo relaxing. (When done correctly, of course.) It’s served ideally between 2-4PM, but can really stretch from 1-5, if need be. My favorite way to be served this one is in courses, but, because it involves soooo much preparation, most tearooms just serve all the courses on a three-tiered tray. First up is finger sandwiches, followed by (hopefully warm) scones with clotted cream and some sort of preserve or lemon curd or both, finishing up with either small desserts or one or two slices of cake. (I once also served giant strawberries, with vanilla and cinnamon whipped cream that I made from scratch!) And, of course, at least one pot of hot tea, usually in a variety of flavors. On occasion, it can be served with a glass of champagne or sherry, and be made even more sumptuous by including a soup and/or salad, and perhaps a bite-size quiche or other hot tidbit. Even though it’s usually considered to be a bridge to dinner, I’ve never been able to consume even one more morsel after dining on all this loveliness. And, if you’re having it all at a classy establishment, such as an upscale hotel, the repast might be accompanied by a harpist or pianist. At the very least, there should be recorded peaceful classical music playing. 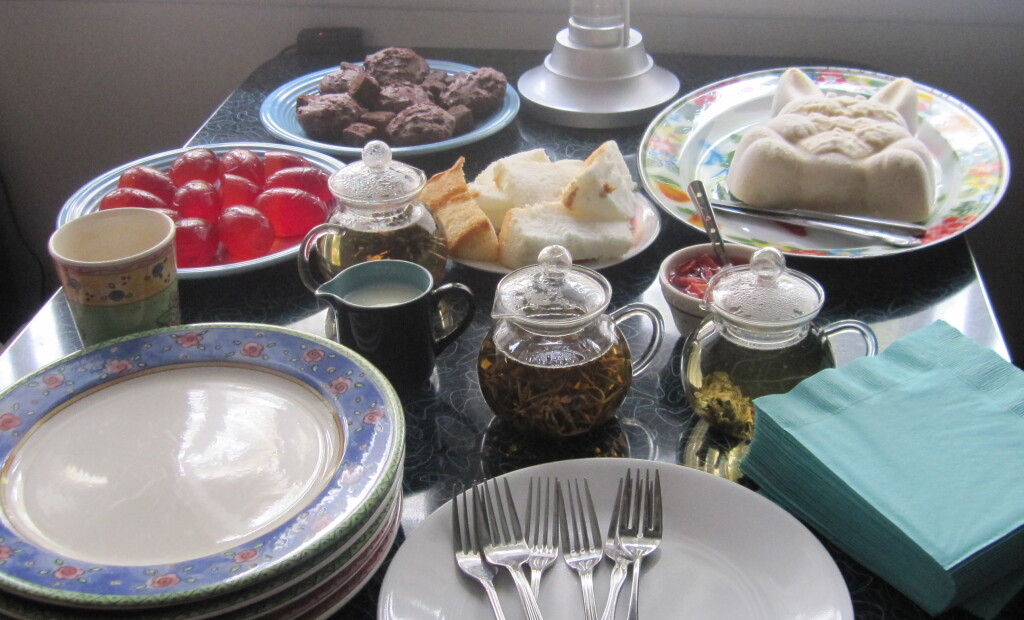 Some of the desserts from my same Easter Afternoon Tea. Photo by Lucia Singer.

High Tea—We finally get to this one, that most people in America are unaware of.
High Tea is basically a hearty supper that’s eaten after 5PM, and consists of mainly “peasant” dishes, such as sausage rolls, crusty bread, and meat pies. It also features stronger, more basic teas themselves; no frou-frou white grapefruit-vanilla type choices.

The overhead view of a colorful late night tea party I whipped-up for Mr. X and me to watch one of the Royal Weddings. Photo by Mr. X.

So there you have it! Your tea education is now complete! Well, almost. When I finally finish and publish my Tea Book, you’ll find-out about the different kinds of tea themselves. And I’ll tell you how all these meals came about, and offer some awesome recipes and serving suggestions.

But this is more than enough info for you to celebrate National Tea Day, don’t you think? And no matter how you take yours, I wish you enjoyment!