For me, 2013 pretty much sucked. Not as badly as it did for millions of others, but having excruciatingly painful hands, especially as a writer and bon vivette, was not fun. I’m far from out of the woods yet, but I’m cheered-up to know that it’s a new year, with fresh possibilities.

Also, I hate the number 13, and love 14. The latter is actually my favorite number. (Can any of you guess why? I’ll tell you at the end.) So, I have high hopes for it, knock on wood.

To wrap-up 2013, I want to temper the horribleness of the second half of last year by trying to find some things to be grateful for the out of all the mess. 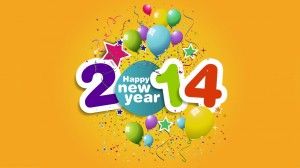 As always, the absolute bright spot was Mr. X. He was the personification of a beacon in a storm. And because I couldn’t do much of anything for myself, including driving, (which, as of this writing, I still can’t do!,) I spent most of every second of the last six months with him. Granted, at least half of that was spent in the house, writhing in pain and screaming, but there’s no one else I’d even rather do that with! (But I have a strong feeling he would have rather lived without that entire scenario. It can’t be fun to see your loved one in so much pain, and there’s nothing you can do to help.)

Prior to this situation, I was out and about all the time, which meant I was out with my friends, rather than Mr. X, because he likes to stay at home. Even though I always have the best time with him, spending so much time together reminded me of the first few years of our relationship; I would rarely leave his apartment because the second I did, there were a hundred girls calling to see him. And they all began their messages with the same stupidity: “Hi, it’s me,” in insipid voices. (Boy, those were the days, weren’t they? No wonder I was so skinny!)

And even though it would’ve been nice if more of my friends had really been there for me during this hand ordeal, I’m so grateful to the ones who were, especially Curtis, Carol, and Lauren. Those three made me feel not so alone in my plight.

And, as always, having Lou there helping with this very e-zine made trying to work during this time a little easier. Of course, we changed site hosts at the same time that my hands went bad, (I didn’t know that this health problem was coming,) so I really appreciated the extra assistance.

And the recent parties of another few pals really cheered me up this holiday season; so thank you to Maria, Fred and Jim, and Joanne. Really great fetes!

I have always been sensitive to other people’s pain, (both physical and emotional,) to the point that I’ve been dubbed an Empath over the years. But this ordeal has opened my eyes even more to what others go through, and as awful as my situation has been, there’s always something worse. So you really have to be grateful for what you have. And I am!

I really lucked-out with finding the correct hand therapy place, and pain management doctor, as well.

And the year did start out pretty well. Enough pals acknowledged my January 14 birthday without me even having my usual big party, so that was really nice. And then I got to spend a juicy month in New York in the Spring, where I really accomplished a lot towards cleaning out my mother’s Brooklyn house, aided, as usual, by the two best friends a girl could have, Lauren and Sheila. The former not only drives from either Manhattan or the Hamptons to pick me up at the airport and take me to my house, but she stays with me overnight, to make the transition easier. And the latter drives out from Ohio to spend weeks working on my house with me, which is just amazing. I don’t think there’s anybody in the world I get along with better than Sheila, so the whole time we’re together is an absolute pleasure. That’s a lot to be grateful for!)

And I’m especially grateful that this year I spent Mother’s Day in Providence, Rhode Island with the Hazel family. I have always loved being with them. (I’m a zillion times closer to them than to anyone I’m related to.) It turned out to be the last time I would ever see the matriarch, Mrs. Emma Hazel, and to have spent a perfect five days with her will always mean so much to me.

So, you see, there is always something to be thankful for, no matter what you’re going through. So, everyone, always hang in there!

[Note: Did you figure out why 14 is my favorite number yet? The answer is actually a few paragraphs back. It’s because it’s my birthday date, of course!!! This month, actually!]