MR. X AND MY ANNIVERSARY! AGAIN! (KNOCK ON WOOD.)

When I was doing my show, I never rehashed any of my yarns because I didn’t want even one person to think, “she already told us that.” So, in over three hundred shows, I never repeated a story. (Or my wardrobe, for that matter!!!) And, of course, I feel the same about repeating myself in print, especially in this E-zine. 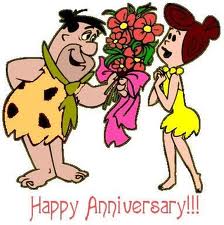 This is how long it feels that we've been together--since the Stone Age!

But, in my ever-obsessive quest for no mistakes ever in my writing, even if it’s already published, I’ve recently begun checking some of my old columns for errors. To my horror, I’ve found a few! (And corrected them, of course.) The fun part is that, in the process, I’ve actually been entertained by some fun memories and info!

One of the columns was about my anniversary with Mr. X a year ago today. It basically said everything I need to say about us at this time, as well, and for once, I couldn’t improve it up on it, so here’s the link to it: https://www.itsnotaboutme.tv/news/2010/07/07/gossip-happy-anniversary-to-mr-x-and-me/

I do have one more quick story to add, though:

When we used to live in two separate apartments, but I slept at his all the time, he asked me to please never leave my sneakers in his bedroom. I was worried that he meant in case some other chick would see them, but he was actually concerned that because my feet are so small, if the police came in for some reason, they’d see my sneaks and think he’s a pedophile! I think if the police were showing up at his apartment, my footwear would be the least of his problems!!! But the concept still made all my friends laugh. And that’s why we’re a couple to begin with—to entertain the masses.

Since this turned-out to be a quick column, now I have more time for us to go celebrate! Yeah, right.