[There’s something fun to do in L.A. today, so please read on. And have a happy St. Patrick’s Day!]

No one in L.A. ever wants to do anything for this holiday! But I always have a great time when I’m on the east coast on any March 17.

Last year, my friend Sheila came from Ohio to hang with me in New York, and we spent the evening with my Brooklyn pals, Jeff and Anna. All four of us had a perfect time, with fabulous dinner, club-and-bar-hopping, and dancing the night away while photog Anna took pro pictures of it all. More than that, one cannot ask.

And a few years ago, my Little Rhody friend, Amanda, and I took a train from Rhode Island to Boston to have afternoon tea at a classy hotel with Lucia (who’s from LA, like I am,) and Tattie, from New York. How perfect was that?! 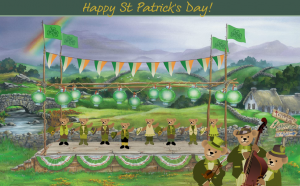 This is from one of the fabulous cards at www.jacquielawson.com, which I highly recommend joining!

On other St. Patrick’s Days in New York, I’ve seen the parades, (both in Manhattan and Brooklyn,) had tea at the Plaza (and other places there, too—I even made one in my house there to entertain my little mother and our good friend Carol,) gone to dinner, shows, afternoon snacks, late night snacks, and even bars. (I say “even” because I don’t drink, but hey, it’s St. Patty’s Day in New York!) Back in the day, when I was at my last (of four) colleges in Rhode Island, my posse used to start out at the Polish-American Club after school, (I still don’t know the reasoning behind that choice) and then roll on to other places for the rest of the night. (And as ethnically-mixed as this group was, I don’t even think there was an Irishman among us!)

But L.A. is dull on this green holiday. Except for today in Pasadena! I have high hopes for the Pasadena Playhouse’s Shamrock-N-Roll. It’s open to the public, and goes all day, from 1-10PM, outside the Playhouse, which coincides with the opening of the new musical, One Night With Janis Joplin. (I’ll be reviewing it later on this week.)

You don’t need tickets to the show to enjoy the pre-and-post activities. There’ll be bands, dancers, food trucks, a beer garden. (I hope those suds will be green!!!) And the pièce de résistance will be Janis’ own psychedelically painted 1965 Porsche 356C Cabriolet, which will be on display! Can’t wait to see that one! (It’s actually a very big deal; I read that, since 1995, it’s been on loan from her siblings to the Rock and Roll Hall of Fame Museum in Cleveland.) But it’s giving me a fashion challenge for today—plain green or tie-dye green?

Speaking of green, a little heads-up if you go anywhere today: if you’re not wearing green, prepare to be pinched! I know that I’ll be taking advantage of that rule! I’ve given you fair warning.

And to all my readers, Irish or not, Erin Go Braugh! ( I hope that means something good!)