Last night was the beginning of Rosh Hashanah, the Jewish New Year. I always celebrate it, but this year I’ve been so wrapped up in my situation with my painful hands, that I hadn’t realized. So, I want to wish all my Jewish readers a belated L’Shanah Tovah. (That that means “happy new year,” and is probably the only Hebrew that most of us use all year!)

When I found out last night that this holiday had just begun, I felt terrible that I wasn’t celebrating it. It’s just another fun thing that I was missing out on in the past two months. But Mr. X was a champion. Even though he’s not of my ethnic persuasion, he ran right out and bought me a challah, which is the traditional round bread that we eat this time of year. The roundness represents the circle of the full year, and you eat it dipped in honey, to help you have a sweet year. (Apples work, as well.) Isn’t that a lovely tradition? So much better than the fasting we have to do on the day of atonement next week. But I do them both, with equal fervor. No sense paying homage to your heritage halfway. 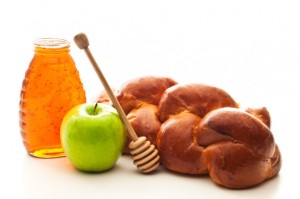 I showed Mr. X that we dip pieces of the challah into the honey, and encouraged him to do it, too; he loved it! In the hundreds of years we’ve been together, he had never been aware of this tradition because I always go to friends’ houses for Rosh Hashanah dinner, and he doesn’t come because it’s not his holiday. (He doesn’t come to people’s houses for dinner for any occasion, but at least he has an excuse for this one.)

After he had eaten a lot of his new favorite treat, enjoying every bite, I mentioned something about why we Jews do this for the new year. A strange look came over his face, and he stopped in his tracks. I asked what the matter was, and he queried back, “I just did something religious???” He was so disturbed thinking that he had crossed some crazy line. I couldn’t stop laughing. When I explained the whole symbolism to him again, he went to town on this sweet treat for the rest of the night. Do you think this means he’ll fast with me on Yom Kippur?

Another tradition that’s interesting about Rosh Hashanah is that you’re supposed to apologize to people you’ve wronged throughout the year. (I wonder if that’s where Alcoholics Anonymous got their step of making amends from. Seriously; I’m not making a joke here. It’s a good thing, no matter where it came from.) Several people apologize to me every year, but then they continue the same behavior as they did before, so I don’t think this particular tradition works exactly the way it’s meant to. But, hopefully, it gets people to at least think about how they might have hurt someone’s feelings, even if they’re not sincerely apologizing to them.

I usually do mean my apologies, so if I did anything this year to hurt any of you, I really am sorry. Unless you’re one of the people I’ve ranted against in print because, let’s face it, all of those people deserved it. And they already did something wrong in some way, which made me rail against them to begin with!

Okay, I better end here before I have to start my apologies over again! And to all of you who celebrate at this time of year, I wish you the happiest and healthiest of New Years. L’Shanah Tovah!