The actual holiday is not until Sunday, of course, but I’m doing something different this year. Instead of suggesting great gifts or places to celebrate, I’m writing a brief tribute to my own little mother, a decade on from the final Mother’s Day I got to spend with her. Even though she passed lo those many years ago, I’m still getting choked-up just writing this. 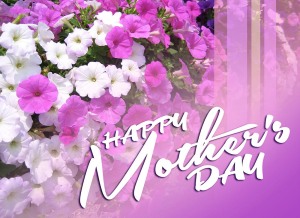 May Rose Salkin was always different from any mother I ever met. She was a teacher from the get-go, which I was so proud of. Most of my other friends’ mothers didn’t work outside the home at all, let alone in the academic field. No disrespect to them, of course, but all the other mothers in my elementary school were homemakers, and wore pants and much make-up, while my mother rocked skirts and the natural look. I’m not going to lie—when I was a kid, I sometimes sort-of wished she would put on a pair of stretch pants and false eyelashes, as well. (But I didn’t think about that often.)

One of the best aspects of Maybelle was that she was the funniest woman ever! My friends always chose to hang-out with her, even when it was not very convenient to do so. In later years, when I’d spend a month or so in New York with her a few times a year, my pals would opt for us to go out to dinner much earlier than usual, so they could come hang-out with my early-to-bed mother for an hour or so before we left. And occasionally, they’d even ask to bring food over and stay in my house instead of dining out, just to spend the evening with my little mo!

The co-best part of her was all the charity work she did, mostly behind the scenes. When she noticed that one of her students perhaps needed some new clothes, she got it for them. She even gave money to many kids’ families! And I can’t tell you how often my entire fam would visit her students when they were sick. 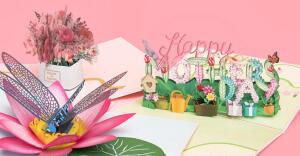 You may have to look at this one twice to see that it says Happy Mother’s Day on the right!

And here’s another kind deed she did every weekday morning–she stopped at a bakery on the way to school, and bought a bunch of pastries with her own money, and then sold them to the teachers in their lunchroom to give the money to charity! (So, in other words, she could have just given her money to charity to begin with, and cut out the middle part. But she wanted the bakery to have money, too, and give the teachers something fun to eat at the same time!)

And she always got her talented students together to perform shows at the local children’s’ hospital. And, of course, we brought all the kids goodie bags. You may think I first learned that concept at all the Hollywood events I frequent nowadays, but no–my mother pioneered it! Our dining room was always loaded with bags which we kids loved helping to fill. I adored giving them out even more. I have never seen another teacher do things like this for people. She was beloved by everyone.

I guess you’re getting the idea that May Rose Salkin definitely marched to her own drummer, which she did even in eras when it was not very cool to do that. (Mr. X just emphatically stated, “She was a rebel!”)

She was that, indeed, which I usually admired. But I have to admit, entertaining as they were, some of her little quirks did drive me a tad crazy. I never knew if she did them on purpose or just by accident, but to this day, when I see a crooked stamp on an envelope, I think of her; every single stamp on every single missive she ever sent was askew. When I’d ask her about it, her attitude was basically, “Oh well.”

And for years when I was very little, we loved eating at a neighborhood eatery, which she called “Hamburger Heaven.” Years later, when I learned how to read, I discovered that the name of it was really “Burgerama!” She just called it what she wanted to, even though she was an English teacher! (I have tons of stories like that one!)

Some of you may remember the traumatic story of my first school Halloween, (which Mr. X said I must tell here, not knowing I had already included it.) The short version is that one October day when I was in kindergarten, my mother told me it was Halloween, and dressed me in my bride costume. Well, I got to school, and of course it was not Halloween yet! I was the only idiot in a costume. Even she didn’t know how she made that mistake! (You can read the entire crazy tale right here. Trust me, it’s a good one: itsnotaboutme.tv/news/holiday-happy-halloween.)

Also when I was very young, my father was the one in charge of playing records. But if he was out giving exams at the Board of Education, (yes, both my parents were educators,) and my siblings and I wanted to hear something, my mother would brave putting a vinyl on the turntable, but only with us three kids standing around the player, all chanting, “Gently, gently,” until she got it on, unscathed. Oysh. 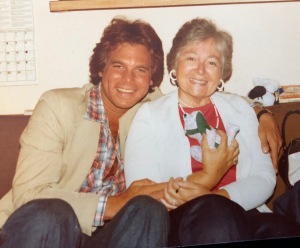 May Salkin with producer David Permut, the two people this YouTube video is about, way back in the day. Photo by Karen Salkin.

One of my all-time favorite stories about my mother is her first trip out here to LA. It’s too long to relate in all its glory here, but I told the entire tale in one of my YouTube videos that I shot during lockdown. (You can see it here; the story starts at 3:50 in, and please know that I was more than a tad punchy on this one: www.youtube.com/watch?v=dtRsfXDIrNI&t=20s.)

My mom could cook only two things. (Perhaps that’s why I became a restaurant critic! The first time I was on The Tonight Show with Johnny Carson, I told him that my mother taught me how to not cook, which he got quite the kick out of.) My mother made hands-down the best matzah ball soup in the world! To this day, I’ve never found more perfect hard matzah balls anywhere else! And she occasionally concocted her famous “mishmash,” which, when I grew-up, I found-out was really shepherd’s pie. (Actually, on this one, I don’t know if she even knew that it was an already-established dish!)

My mother seemed to have two favorite words–“charming” and “adorable.” Nowhere was that more obvious than when she guested on my TV show, Karen’s Restaurant Revue, which she did three times—the first alone and then two as the comedy team that was my parents together. She deemed all the restaurants we reviewed, (and their male owners,) to have those two qualities, while my father said that everything was “unusual,” (which none of it was, by the way.)

Here are some interesting occurrences: May Rose learned to drive at fifty-two! And she discovered her talent for painting around that age, as well. She was already a successful published poet, but that she become an accomplished miniature watercolorist, too, was a surprise to all of us. If she bestowed one of her works on you, you were considered special. Which reminds me–she often sold her work at the Brooklyn Heights Promenade art shows. But if she deemed you to be adorable, she just gave you a painting! And if she didn’t like you, for one crazy reason or other, she wouldn’t let you purchase a painting! How nutty was that?! It drove my father crazy. (As Mr. X pointed-out, that was not the best business model.)

A sextet of miniature watercolor paintings by May Salkin, proudly displayed in one of Karen Salkin’s “precious possessions” areas. Photo by Karen Salkin.

In more examples of how different my mother was, I recently noticed a Facebook post entitled Mom’s Favorite Sayings. There were ones like “What part of no don’t you understand!?” And “Money doesn’t grow on trees,” “Eat your vegetables,” and “Because I said so, that’s why!” And it hit me in a nano-second—never once did my Brooklyn Jewish mother utter even one of those sentences! Ever!

She was a cut above, in every way: she always wore skirts, never pants; she was a teacher when all the other mothers were stay-at-homes; she let us play in the living room and anywhere else in the house that we wanted to, while at everyone else’s homes we were confined to one playing area and never the living rooms; she never threatened or even punished us, (my father did that); and though not wealthy by any stretch of the imagination, she gave me the money I needed to go out with my friends, without making me have an allowance or do chores for the cash. I could go on and on, but you get the drift by now. 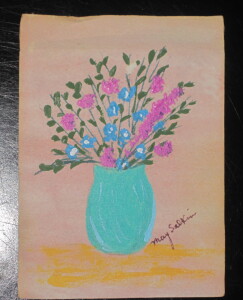 And one of my favorite miniature paintings of my mother’s by itself. Photo by Karen Salkin.

And, boy, could that woman plan activities! Since, as I said, both my parents were teachers, the whole family had the summers off from school. And every single day was full of fun things to do, all planned perfectly so none would get repetitive.

And yes, I did always appreciate her for all of that, even when I was a kid! And I’m thrilled that I let her know of that appreciation all the time.

So, of course I wish my mother was here to wish a Happy Mother’s Day to. But absent that, please let me remind all of you to show-up for your moms as much as possible, even if she isn’t as “adorable” as my maternal parental unit was.

And to all of you who are celebrating this week-end, let me be the first to wish you a Happy Mother’s Day. And stay safe out there!