Trending
You are at:Home»HOLIDAYS»HOLIDAY: HAPPY HALLOWEEN 2016
By Karen Salkin on October 31, 2016 · HOLIDAYS 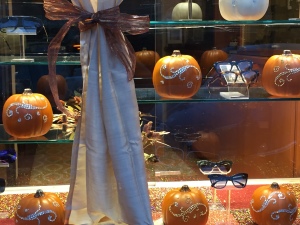 A closer look at the Optical Options window, (of course it’s closer–it’s an optometrist’s boutique!,) which is featured in the big pic at the top of the page. Photo by Karen Salkin.

I’ve always loved Halloween, but it often doesn’t work-out well for me. I’ve had my best ones on the East Coast, so this year, when confronted with the choice of flying home to LA in time for any possible fetes, or staying a bit longer in NYC and celebrating here, is it any wonder that I chose the Big Apple! I knew it could go either way; sometimes I’ve had fun trick-or-treating on the streets of New York with my teen-age pals, but occasionally I’ve found myself alone and in search of Halloween. One year, I actually felt like Charlie Brown and Linus, waiting up for the Great Pumpkin, who never shows-up. I drove the streets of Brooklyn, all by lonesome, looking for any signs of fun, with no luck whatsoever. 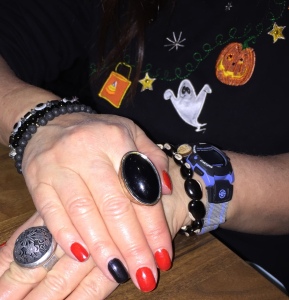 My Halloween nails. They are orange, not red, as they appear in this pic. The high-class nail tech didn’t want to make them cartoonish. And notice the shirt I’m wearing, in the background. Goony enough for you?! Photo by Helen Rothwax.

But, I’m glad I gave New York another shot this year. I really appreciate that so many people, even in difficult Manhattan, put in the effort to decorate. The very first display I saw was at the office of my optometrist, Dr. Manny Greitzer, in Greenwich, Connecticut. Optical Options always has stunning, classy windows, at all times of the year, but this one was a bit extra-beautiful.

I definitely did my part on this coast,as well, rocking multiple Halloween earrings, a couple of decorated shirts, and not one, but two versions of my traditional Halloween nails. Everyone here loved my festiveness, which they sometimes poo-poo in LaLaLand, so I definitely made the correct decision on where to celebrate this year.

One of my favorite clever “costumes.” Photo by Karen Salkin.

My friend Sheila and I began the reveling over a week early with a visit to the adorable Halloween Dog Parade in Tompkins Square Park. I thought it was going to be this sweet little parade of about two dozen dogs in costumes. And then, when it rained that whole morning, I expected about three poor wet pups. 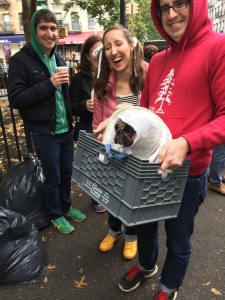 ET! Look how happy everyone is! (You know it’s New York by all the garbage on the left, that no one here even notices.) Photo by Karen Salkin.

But I was overwhelmed when we arrived—it appeared that half of Manhattan showed-up there! And I’ve never seen these NYC residents getting along so well! There were big smiles everywhere you looked. The amity went on for so many blocks that, when we alit from the bus, we thought we had missed the whole shebang—we saw people with dressed-up pooches blocks before the park, walking towards us, so we assumed that the crowd had dispersed. But the fun actually went on for hours. Some of the costumes were so creative, like a group who was dressed up as the Wizard of Oz foursome, just so the one dog could go as Toto! He was the only one of that crew who was not technically in a costume! Even though we excepted to see a whole lot of hot dog costumes, I noticed only one. And it still made me chuckle. 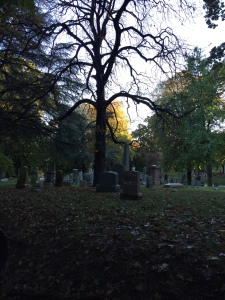 Sheila and I also paid a visit to Brooklyn’s very famous Greenwood Cemetery, where a lot of old war battlers are buried. That’s not a Halloween activity, per se, but I’ve always heard that that’s what people around here do this week each year. And we went there on a rainy day, so it was a tad spooky.

A few days later, another pal, Lauren, and I had a really fun surprise when we went to Bucks County, Pennsylvania. (I’ll tell you all about that jam-packed thirty-hour whirlwind next week.) On our only night there, we drove across the bridge to Lambertville, New Jersey to see the spooktacular houses on Union Street that are decked-out for Halloween the way that the residents of Candy Cane Lane in LA do it for Christmas! There was one house in particular that took our breath away. Retired art teacher Dolores Dragan makes all the life-size figures by hand! Tim Burton needs to hire her! 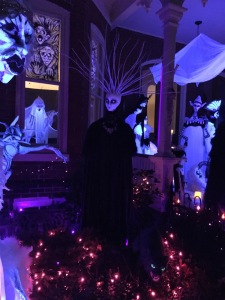 So, for one of the few years ever, as today approached, I feel that I’ve already done Halloween to the max. But there is more to come! Tonight, I’m going to the parade in Greenwich Village with a bunch of peeps here, book-ended by two restaurant visits, and some time at local “haunted houses” thrown in for good measure.

So, New York has come through for me this year! This has been the best Halloween in a long while, since my Rhode Island guys were little boys who took me trick-or-treating, and told everyone I was their big sister, Wandita!

I wish you all an equally fun time, wherever you are, and whatever you do. And, especially, a safe one.